Law Firm Signs 30K-SF Lease at The Wharf in DC 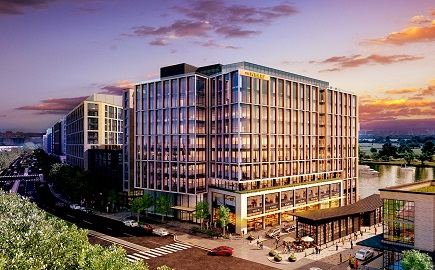 Michael Best & Friedrich has signed a 30,404-square-foot lease at 1000 Maine Street SW, according to a press release from Savills Studley, which represented the law firm in the deal.

In February, Michael Best & Friedrich will bring its legal practice, government relations and public affairs consulting group, called Michael Best Strategies, under one roof in an 11-story building at The Wharf, a PN Hoffman development that opened last year, per the release. The company currently houses its legal practice in two spaces totaling 11,600 square feet at 601 Pennsylvania Avenue NW and its government relations and public affairs team at a 5,000-square-foot space at 801 Pennsylvania Avenue NW.

“In uniting our talent at 1000 Maine, we will be able to provide our clients with an enhanced, integrated experience across our legal and public affairs practices,” Kevin Barner, the managing partner at Michael Best’s D.C. office, said in a prepared statement.

Ben Plaisted, Greg Scheipers and Mordecai Scott of Savills Studley represented the firm in the transaction. “Newly constructed properties continue to be in high demand for law firms considering a move,” Scheipers said in the release. “With its close proximity to Capitol Hill, prominent waterfront location and modern amenities, The Wharf provides an ideal new home.”

JLL’s Amy Bowser represented the landlord in the deal. Bowser told Commercial Observer that the “long-term” lease was signed in July 2018. She nor a Savills Studley spokesman would disclose the asking rent per square foot or the exact length of the lease.