Debt Heat: How Life Cos, Banks and CMBS Pros Are Carving Up the Market 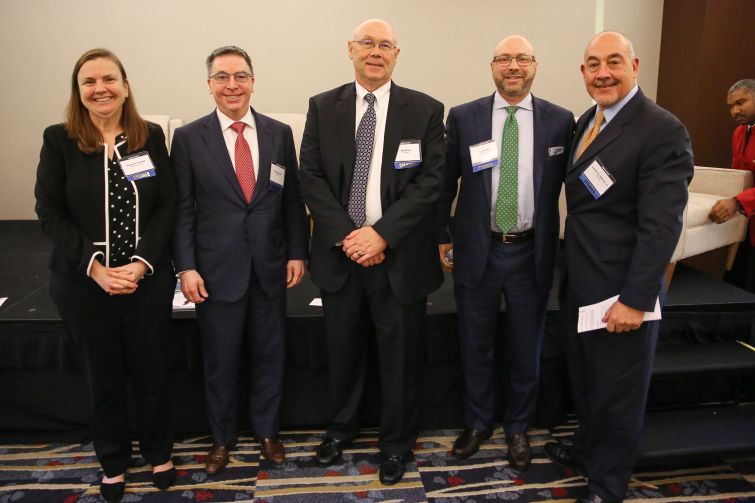 The Game of Thrones theme at Commercial Observer’s 2nd Annual Financing Commercial Real Estate Forum in Washington, D.C. carried through to the “Battle Royale: CMBS vs. Balance Sheet vs. Life Company Loans” panel, in which industry experts in each of the three executions went head to head in discussing their lending preferences. Blank Rome Partner Elaine Scivetti moderated the panel.

Jay Arvai, the regional director of commercial real estate for TD Bank brought the balance sheet perspective to the room. As a highly-regulated bank, TD is a risk-averse and tends to offer recourse loans, although, “that’s not to say we won’t do non-recourse,” Arvai noted.

At the opposite end of the spectrum, offering non-recourse loans and sitting lower in the capital stack is Barings, an investment firm owned by Massachusetts Mutual Life Insurance Company.

Barings Managing Director Joseph Iadarola said the lender takes a long-term view of assets (having closed some 40-year loans recently for multigenerational real estate owners) and is heavily focused on cash flow, the location of assets and sponsorship. Specializing in multifamily and hotel assets, Barings is on track to close $4 billion in originations this year.

Natixis’ head of real estate and hospitality, Greg Murphy sits in a unique hybrid role as both a CMBS lender and issuer as well as a balance sheet lender (originating a whopping $7.52 billion in loans in 2017, per Commercial Observer’s Power 50 list).

As a French bank, Natixis answers to regulators on both sides of the Atlantic, and is therefore especially conservative in its lending practices, with “every ‘i’ dotted and every ‘t’ crossed,” Murphy said.  But while some lenders may be a little speedier in closing deals, Natixis’ competitive edge lies in its certainty of closing, as well as it being a true partner in a deal’s execution. “We offer to underwrite more than we’re going to [hold],” Murphy said. “We’re willing to take down a $400 billion construction loan and worry about the syndication, the senior to subordinate division, and everything else that’s needed.”

Speaking more generally about the CMBS market, Murphy said that transaction volume is holding steady this year. He noted significant growth in floating-rate transactions and in the collateralized loan obligation space, where issuance is expected to reach $15 billion this year, more than doubling 2017’s total.

Speaking of CLOs, Voya Investment Management’s Head of Real Estate Greg Michaud said the insurer is an active buyer in the space, but when it comes to CMBS, it prefers single-asset single-borrower deals over conduits.

It’s difficult to discuss CMBS without acknowledging one of its biggest headwinds to growth—CMBS loan servicing. And this panel was no exception.

“It’s been the focus of the entire industry for years,” Murphy said. “We’ve come a long way in making CMBS more user friendly.”

Natixis is making strides to overcome borrower concerns around servicing in carving out the controlling note in CMBS deals, holding it on its balance sheet and then securitizing the rest of the deal. “That way, we’re along with [the borrower] in the deal, and servicers will always take Natixis’ call.”

When the conversation turned to asset class preference, Michaud said that going into the cycle Voya’s lending book was approximately 40 percent industrial assets, and now it’s 20 to 30 percent due to heightened competition in the sector. He has some concerns about the boom in multifamily lending driven by Fannie Mae and Freddie Mac, saying: “Any time you see asset classes driven by cheap financing you should worry.”

And despite the chatter that retail is falling apart, TD is still doing some retail lending—but on grocery-anchored shopping centers and not malls, Arvai said. The bank prides itself on speed of execution and certainty of closing, putting some pressure on its credit committee to approve deals.

Iadarola said Barings also closes loans quickly, aided by having boots on the ground in numerous markets across the U.S. Additionally, “we’re not a very deep organization, so we have the credit people involved right out of the gate,” Iadarola said, adding that Barings can lock in a rate at the time of application and hold it for 90 days.

Not to be outdone, Michaud said that Voya often closes deals in only 35 to 40 days, but the biggest challenge is often getting a lockbox set up prior to a deal closing, calling out the current providers of lockbox services as being “the biggest nightmare.”

Ending on a positive note, Murphy said that despite a tidal wave of headlines regarding a halt in Chinese investment into the U.S., he sees continued international capital flows, with an uptick in foreign lenders desiring to invest in U.S. commercial real estate debt. That capital is coming from the Middle East, Japan, Korea, Taiwan and…yep, China.

In other words, don’t believe everything you read—but you didn’t hear that from us.