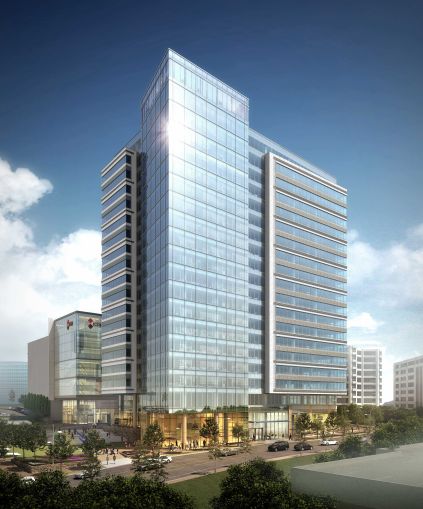 Accounting firm KPMG signed a lease to occupy up to seven floors at Boro Tower, a 20-story office building under construction at The Boro development in Tysons, Va., according to a press release from Meridian Group and Rockefeller Group, which are codeveloping the property.

The seven floors span 168,000 square feet, according to a spokesman for the developers, who told Commercial Observer KPMG signed a 16-year lease on Oct. 17.

David Cheek, the president of Meridian, said in a prepared statement, that he was “pleased and proud to welcome one of the world’s big four accounting firms to Boro Tower.”

When it opens in 2019, Boro Tower will feature a glass curtain wall, nine- to 10-foot ceilings and an expansive rooftop terrace, per the release. Asking rents are in the upper $50s per square foot, the developers’ spokesman told CO.

Jerry Carlson, who oversees KPMG employees in the D.C. region, said in the release that the tower offers “a new world-class environment and an incredibly convenient location for our team and clients.” In 2019, the firm will relocate to Boro Tower from its current office nearby at 1676 International Drive, according to the release, which notes that the firm will bring about 1,830 employees to the tower.

With the KPMG lease, Boro Tower is more than 60 percent occupied, with approximately 178,000 square feet remaining available for lease.

Other tenants who have pre-leased in the building include global law firm Hogan Lovells, which will occupy 44,500 square feet, and digital media and marketing services company Tegna, which will take up about 46,000 square feete, as CO previously reported.

Rob Faktorow and Terry Reiley of CBRE represented the landlords, while Phil Leibow and Bill Craig from JLL represented KPMG in the deal. None of the brokers returned CO’s request for comment.