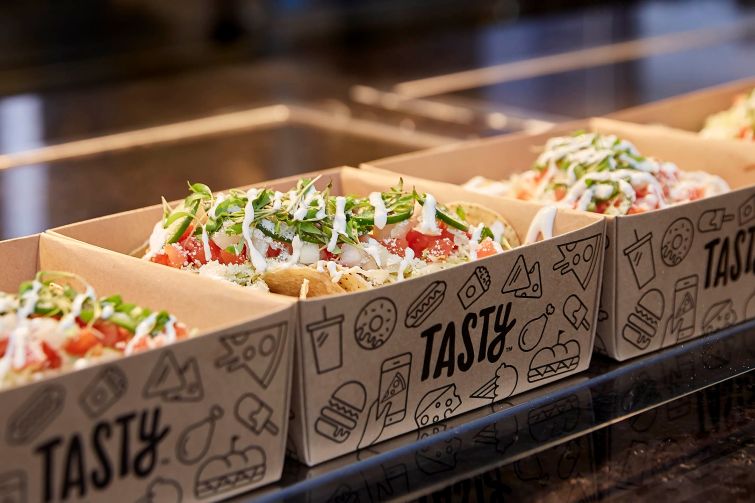 News organizations with food divisions have started to move from keeping its readers informed to keeping their bellies full.

Publishers like Vice and BuzzFeed have taken a page out of Time Out Group’s book and licensed out their names to open up branded food halls, food carts and pop-up events across the country as news companies struggle to keep the lights on.

“The branded food halls are going to be part of the next evolution of this trend,” said Garrick Brown, a vice president of retail research at Cushman & Wakefield. “You’ve got this built-in mechanism for advertisement, for branding—it makes perfect sense for media players to do this.”

With media companies and malls struggling, the new venture could help both survive. It offers a new revenue stream for publishers to help offset layoffs as advertisement dollars continue to shrink, while mall owners hope the media-branded food halls can draw customers out of their homes and back through its doors.

“When you can work from home, shop from home, do everything from home what are the things that you’re willing to leave home for?” retail consultant Kate Newlin said. “Going to a food court probably isn’t on that list but going to one with Vice could enter my consideration.”

“We wanted to partner with someone who was going to be a little bit different, who was going to be not expected,” Dimitri Lalagos, a senior vice president of leasing for American Dream, said. “They can reach out to attract edgy, cool restaurateurs who otherwise might not consider this type of environment.”

A spokesman for Vice did not respond to a request for comment and a spokeswoman for BuzzFeed declined to comment.

The 38,000-square-foot food court will have 18 eateries selected by Munchies along with space for the brand to film content and demonstrations from chefs, according to a news release. Under the deal, Triple Five will pay Munchies a licensing fee, along with royalties depending on revenue, while the publisher can sell merchandise inside, Digiday reported.

“We’re always looking for opportunities to expand the Munchies brand beyond digital media and provide fun, offline experiences for our fans to taste, interact and learn, as well as tell our stories to new audiences,” Munchies co-Founder and Publisher John Martin said in a prepared statement.

“I think anybody that crosses markets and utilizes different platforms to really get the word out, especially now when readership is down, is brilliant,” said James Famularo, the president of Meridian Capital Group‘s retail division. “It’s always smart when two companies come together and they utilize their own unique set of identifiers.”

British media company Time Out Group helped kick off the trend in 2014 when it opened Time Out Market in Lisbon, Portugal. It later became one of the top tourist destinations in the city on TripAdvisor within eight months and the group has begun work on replicating it in other cities.

“Rolling out Time Out Market globally is part of Time Out Group’s diversification and growth strategy,” Didier Souillat, the CEO of Time Out, said in an email. “We no longer only write about the best things of the city—we also create and deliver them.”

Time Out announced plans to open similar markets in London, Miami, Chicago and Boston and leased a 21,000-square-foot space in Dumbo’s Empire Stores earlier this year to bring one to Brooklyn. A spokeswoman for the publication didn’t provide a comment by publication time.

“It really is kind of a full-circle completion of their strategy, taking what they have in their magazine, in the online media, and putting it to life here in Dumbo,” said Jack Cayre, a principal of Empire Stores owner Midtown Equities.

The Brooklyn market, scheduled to open later this year, will bring 20 restaurants under one roof at 55 Water Street along with a rooftop space overlooking Brooklyn Bridge Park.

Midtown Equities fielded numerous requests for food hall operators in its warehouse-turned retail and office complex, but Time Out‘s reputation for finding the best eateries in the city made them stand out, Cayre said.

“Time Out is an authority on food and restaurants,” he said. “We believe that they were in a strategically better position to identify who the best of the best were.”

With or without the backing of a publication, food halls have been steadily on the rise across the country.

The number of major food halls nationwide is expected to triple to 300 from 2015 to 2020, according to an April report by C&W. As many as 190 of them will be opened by the end of this year, the report found.

Despite the rapid pace at which new food halls are opening, the report determined few have shuttered. Indeed, only five of them closed around the country in the last two years, Brown said.

As the food hall market continues to balloon, Brown expects a few more to close, but partnering with a media brand could help keep the doors open and draw customers.

“As the marketplace becomes more crowded, the two winners are going to be the best quality projects and also the biggest name projects that can bring people in without feeling overly corporate,” Brown said. “If you got this marriage with a huge brand name that’s guaranteed authenticity, that’s the grand slam.”

Update: The story has been updated to include comments from representatives from Time Out Group and American Dream.