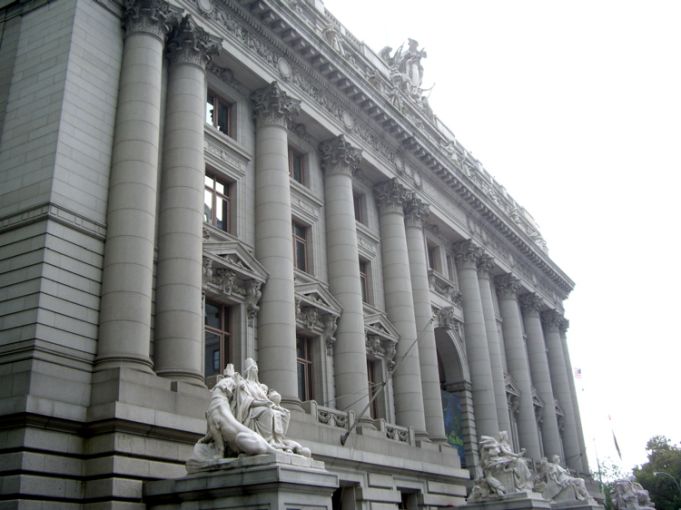 US Bankruptcy Court for the Southern District of New York. Photo: Wikicommons/Dmadeo

Developer Rutherford Thompson filed for Chapter 11 bankruptcy protection on Tuesday to prevent the UCC non-judicial foreclosure on his stalled condominium development at One Bennett Park, also known as 29 Overlook Terrace, court documents filed in the U.S Bankruptcy Court for the Southern District of New York show.

As previously reported by CO, the foreclosure auction of 100 percent of the ownership entity’s interest in the Hudson Heights property—pledged as collateral for the current debt on the property—was due to take place Wednesday at 11 a.m. at the offices of law firm Kramer Levin, with Ariel Property Advisors overseeing the bidding process. Thompson’s filing was made only a day earlier, “on an emergency basis.”

The 23-story, 114-unit condo building is still under construction despite completion being anticipated years ago. The project has faced “a host of problems involving lenders, cessation of financing, cessation of construction and changing market conditions,” Thompson’s filing states.

In 2006, Petra Mortgage Capital made a $30 million acquisition and construction loan on the property, after which Ultra Construction Loan Investment Fund—a fund administered by Amalgamated Bank as trustee—provided an additional roughly $2 million in financing. Thompson’s suit alleges that a series of disputes then commenced between the two lenders over the administration and financing of the loan which eventually led to litigation and a settlement under which Petra was paid $24 million and all of its outstanding debt was assumed by Ultra Construction Loan Investment fund.

In addition to the senior debt, the fund also holds a $63 million building loan and $6 million project loan on the property.

In 2014, Thompson became embroiled in litigation with the lender over its refusal to continue funding the project because of a maturity default. A Manhattan Supreme Court judge ruled that Ultra Construction Loan Investment Fund must resume funding on the condo project, which then resulted in a modification and reduction of the senior mortgage debt to $19.5 million if Thompson paid it off by September 2017.

Thompson claims in the court filing that the debt wasn’t repaid due to an inability to sell the property. After several extension of the loan’s maturity date the lender declared a default and scheduled a UCC foreclosure auction “despite ongoing efforts by me to procure a buyer or new lender for the property,” Thompson claims.

The goal of the Chapter 11 filing is to preserve One Bennett Park’s status quo and allow Thompson “one final opportunity to procure a buyer for the property so as not to forfeit a project that still retains a potentially bright future after ten years of turmoil,” he states in the document.

Thompson came close to signing agreements with various third party developers during the loan’s extension periods, according to Thompson’s filing, all of which fell apart “at the eleventh hour.” Further complicating the issue is the need to renovate the Fort Tyron Jewish Center in order to continue easement rights, thus requiring the cooperation of the center and elevating the case “beyond a two-party dispute.”

Representatives for Amalgamated Bank did not respond to a request for comment. Officials at Ariel Property Advisors declined to comment.