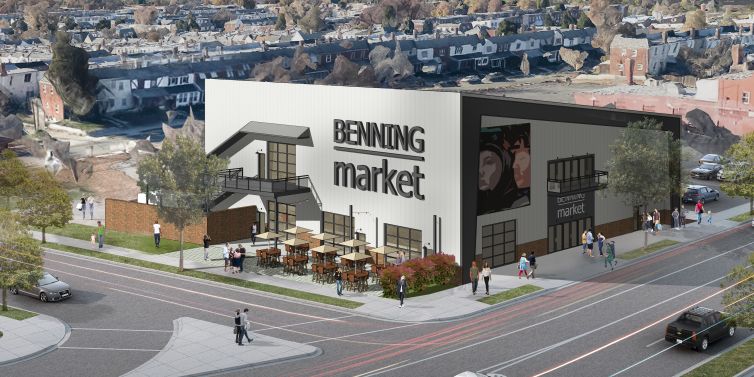 Neighborhood Development Company (NDC) is bringing a food and retail market to 3451 Benning Road NE in Washington, D.C.’s River Terrace neighborhood, according to the developer.

Located east of the Anacostia River, the area is widely considered a food desert, which NDC hopes to use to its advantage by featuring quality food options and a café, according to Alexander Zemicheal, a director at NDC. “Our primary goal for the market is to focus on food entrepreneurs—the guy that’s got the best food truck on the block but is not ready for the big expensive fit-out restaurant and wants to have a permanent location and experiment with different things around that,” said Zemichael, who’s leading the project.

Benning Market is also slated to have a fitness studio and possibly a nontraditional office space, according to Zemichael, who called River Terrace an “up-and-coming neighborhood, with a great base of middle-class homeowners.” He said that the community’s proximity to the 295 highway and public transit hubs also make it an appealing location for businesses.

NDC purchased the 0.3-acre parcel for $1.6 million in February, according to the Washington Business Journal, which first reported news of the market.

Joe Farina and Brandon Howard of Divaris are handling the project’s office and retail leasing.

“We are focused on creating a vibrant tenant mix to both service the local community and become a destination for patrons from around the [D.C. region] seeking a unique and authentic experience,” Farina said. “Our initial conversations have been overwhelmingly positive.”

The project will cost $5.2 million, as Commercial Observer previously reported. To help with fundraising, NDC has set up an investor page on real estate crowdfunding platform Small Change, which is open to credited and non-accredited investors with a focus on impact investing. “The main reason for using Small Change for this project was to broaden the community ownership of the project and to allow small investors who believe in the project to be a part of it,” Zemichael said.

Thirty-eight people have contributed $222,000 at the time of publishing this article and the offer expires in nine days. Benning Market is slated to open in the fall of 2019.