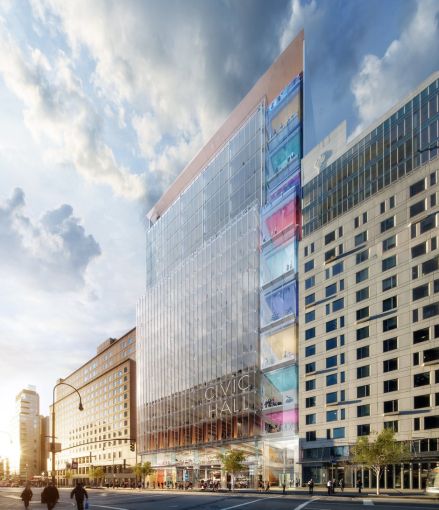 RAL Development is one step closer to a rezoning that will pave the way for a commercial building at 124 East 14th Street on a site that currently holds a P.C. Richards. The 240,000-square-foot development will be anchored by tech training nonprofit Civic Hall, which will occupy the fourth through seventh floors with coworking space, and there will be 40,000 square feet on the second through fourth floors for workforce development programs. Civic Hall’s space will be used for coworking, events and meetings with city business leaders, and the 40,000 square feet of classroom space for training programs will be operated by five organizations including Per Scholas, FedCap, the City University of New York, Mouse and General Assembly. There will also be a ground-floor retail space with a food hall. The Tech Training Center and Civic Hall also received a $100,000 grant from Microsoft yesterday to fund workforce training programs, the city announced yesterday.

The building’s eighth through 12th floors will have affordable, “step-up” office space for early-stage companies that will rent at roughly $50 a square foot, and the top eight floors will host market-rate office space.

A spokesman for the city’s Economic Development Corporation explained that the pieces of the project are supposed to allow companies to move from the bottom of the complex, where workers are trained to code, then to the coworking space, to the subsidized offices, and finally to the market-rate portion of the project.

RAL will pay $2.3 million annually on a 99-year ground lease for the city-owned site, according to Politico New York and other outlets. P.C. Richards has operated its single-story appliance store on the 15,450-square-foot parcel for more than two decades. The EDC, which awarded a contract to develop the site at the end of 2016, helped spearhead the rezoning.

The Davis Brody Bond-designed building is expected to create 600 jobs and cost $250 million to construct.

“The Tech Training Center is a great example of smart land use policy in New York City,” Deputy Mayor Alicia Glen said in a statement. “This state-of-the-art facility will activate prime real estate in Manhattan and will provide space for growing tech companies—co-located with space for workforce training providers and digital educators, providing real-time connections for thousands of New Yorkers to access jobs at the companies that will help shape the future of the city.”

New York City Economic Development Corporation President James Patchett also sent along a statement of glowing support for the project, noting that it will “move the needle on diversity in tech.”

Although community activists, historic preservation groups and the local City Council member Carlina Rivera have expressed concerns about the project being out of scale, the development has largely flown through the seven-month-long uniform land use public review process (ULURP). Rivera worried about the size of the project and whether it would attract out-of-scale development to the surrounding blocks. At previous public hearings for the tech hub, she pushed for height caps on the blocks surrounding the proposed building in an effort to prevent out-of-scale development.

Nevertheless, today she voted through RAL’s project. The development heads to the full City Council for a vote on Aug. 8.