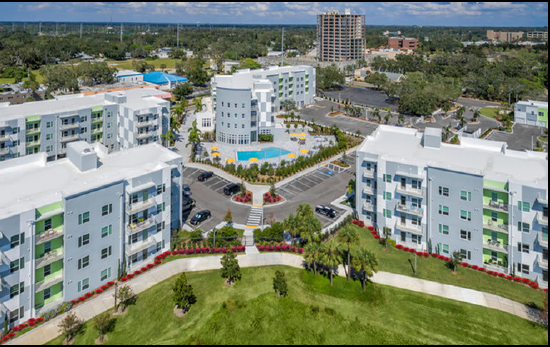 NM Residential has scored a $42 million loan for its acquisition of The Nolen, a 257-unit multifamily property in Clearwater, Fla., Commercial Observer can first report.

ACORE Capital provided the five-year financing, which comprises a first mortgage plus a mezzanine loan. The deal closed July 23.

The Nolen is located at 949 Cleveland Street in Clearwater, in close proximity to Clearwater Beach and Prospect Lake Park. Property amenities include a dog park, a swimming pool and a yoga studio.

Maitland, Fla.-based NM Residential purchased the apartment complex on July 25 for $46.8 million, according to the Tampa Bay Times, which first reported news of the acquisition.

“NM Residential is a new relationship for ACORE and we closed this loan for them in 30 days,” Lance Wright, a managing director at ACORE, told CO. “We liked this loan because it provided acquisition financing on a recently constructed, Class-A wrap multifamily asset located near the beach in the heart of downtown Clearwater, Florida.  The Nolen has the best amenity package in the submarket and offers the right unit mix of primarily one bedroom units that appeal to the 20- to 30-year-old demographic that is not ready for home ownership yet.  We also liked the fact that Clearwater is a smaller market that has limited new supply which should allow The Nolen to lease up and stabilize quickly.”

NM Residential typically builds Class-A properties but has recently sold some assets through 1031 tax exchanges, NM Residential President Michael Niederst told CO. So when The Nolen acquisition opportunity arose, it was too enticing to pass up.

Part of the project’s appeal was Clearwater’s growth path and The Nolen’s 11,500 square feet of available retail space on its ground floor, Niederst said. NM Residential plans on hosting food vendors at the property via an “indoor street market” concept, and will also use outdoor community space for musical performances.

The deal may mark the first time that NM Residential and ACORE have transacted, but it won’t be the last time, Niederst said. “We were very happy,” Niederst said of his experience with the lender. “They were competitive in offering good interest rates and LTVs, they had great references and we really enjoyed working with them.”