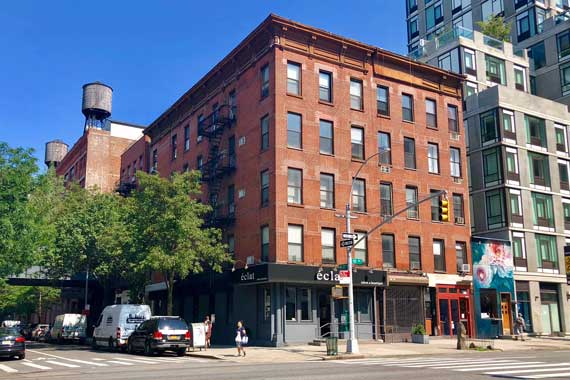 The $20.7 million loan was arranged by brokerage JLL, and it goes toward the purchase of the “Highline Portfolio,” which comprises three mixed-use properties, including 505 West 22nd Street, 203 and 205 10th Avenue and an adjacent retail building at 207 10th Avenue near the High Line in Chelsea.

Morgenstern has dubbed the multifamily portfolio Highline 22, which will be managed by the firm’s in-house property and construction management arm Canvas Property Group, Rob Morgenstern said.

“Highline 22, with its proximity to the office development coming online at Chelsea Market and Hudson Yards, is uniquely positioned to be one of the top luxury limited-service portfolios in West Chelsea,” Morgenstern Managing Principal Rob Morgenstern said in a prepared statement. “This is a long-term hold and will be one of the anchors to Morgenstern Capital’s growing portfolio of value-add multifamily and mixed-use properties.”

Two entities—Tsoumpas 203 Holdings and Archangel Michael Realty, LLC, both with an address at 157 Lexington Avenue in Kips Bay and under the name John Tsoumpas, according to Department of Housing Preservation and Development records—were listed in New York City Department of Finance records as owning the properties previously. A source with knowledge of the transaction told CO that the seller was a family that had owned the buildings for over 30 years.

Altogether, the portfolio comprises 26 residential units and four retail units, and it also has available more than 11,000 square feet of unused air rights, according to JLL.

“Morgenstern Capital is a highly-experienced real estate investment and development firm focused on acquiring and re-positioning high quality assets in prime New York neighborhoods that display significant growth potential,” JLL Managing Director Jonathan Schwartz, who was a part of the deal team, said in a prepared statement. “The firm intends to implement a significant renovation plan to capitalize on the portfolio’s location within Chelsea, one of New York’s strongest multifamily and retail submarkets. Morgenstern Capital has successfully executed re-positioning strategies across 35 assets, many of which had similar business plans to the High Line Portfolio.”

Schwartz, along with JLL Vice Chairman Aaron Appel, with Brian Buglione and Patrick Cotter, led the JLL team in arranging the acquisition financing.

The building at 505 West 22nd Street is a five-story, roughly 6,000-square-foot property with 10 residential units and 1,650 square feet of unused floor-area-ratio (FAR), according to PropertyShark—it was last renovated in 1988.

Rob Morgenstern was not immediately available for further comment. A representative for Raymond James did not provide comment before publication.