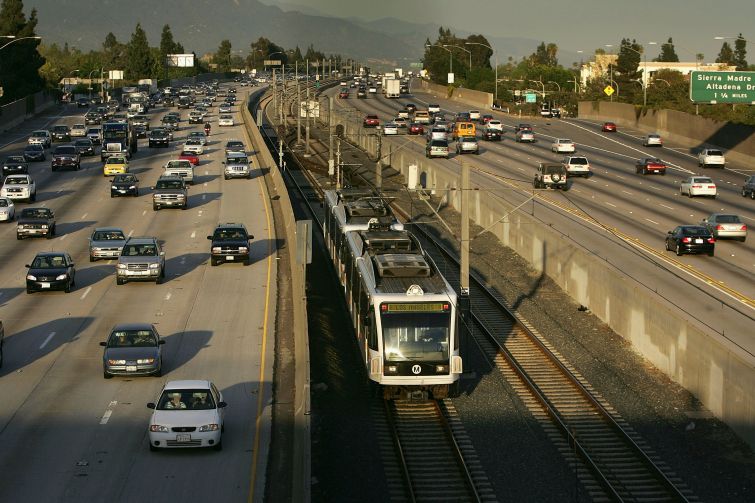 The San Fernando Valley gets a vote for 14 new stations. (Photo by David McNew/Getty Images)

The San Fernando Valley is being brought into the fold of long-awaited transit expansions, with the Metropolitan Transportation Authority voting unanimously last Thursday to bring a light-rail line to the East Valley, addressing long-standing complaints that transportation officials have neglected the needs of this poor, transit-dependent part of Los Angeles County.

The $1.3 billion rail line will run along Van Nuys Boulevard, the street most synonymous with the Valley’s post-World War II car culture. The line will add 14 stations in Van Nuys, Panorama City, Arleta, Pacoima and San Fernando to the county’s growing rail network, as The Los Angeles Times reported. The 9.2-mile light-rail line will run between the Orange Line’s Van Nuys Station and the Sylmar/San Fernando Metrolink Station as the “preferred alternative” for the East San Fernando Valley Transit Corridor project.

Construction on the line is scheduled to start in 2021, with passenger service slated for 2027, just in time to ferry spectators to the Sepulveda Basin to watch equestrian events and canoeing during the 2028 Summer Olympics.

Meanwhile, on the Westside, a proposal to add density to a handful of neighborhoods along the Expo Line, was approved last week by the Los Angeles City Council’s planning and land use management committee.

It would also alter zoning in a small corner of West L.A. along Bundy Drive, dubbed “the Bundy Triangle,” to allow for multifamily housing to be built where only single-family homes are allowed now.

The plan was voted through last Tuesday with a few changes. One of the biggest tweaks, at the request of Councilman Mike Bonin, who represents the area around the Expo/Bundy station, was to require every residential project to include “some level” of affordable housing if the developers take advantage of density bonus incentives set forth by the city.

Councilman Paul Koretz—who has historically been against adding density to single-family neighborhoods—voted in favor of the plan after being granted a request to scale back building heights to a maximum of 50 feet from a maximum of 72 feet in an area on Pico Boulevard, east of Sepulveda Boulevard, roughly between the Expo/Sepulveda and the Westwood/Rancho Park stations.

The plan still has to get the approval of the full City Council.