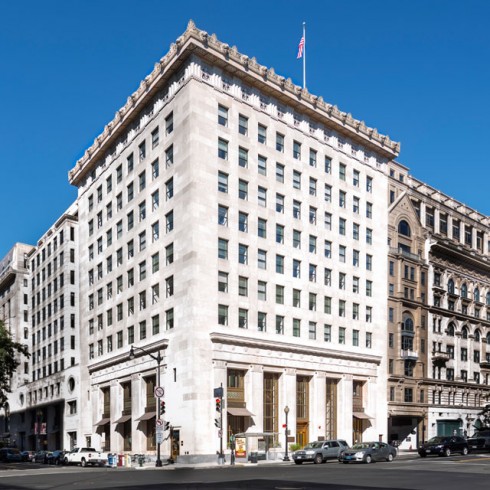 Interel, a global public affairs and association management firm, is moving from Tysons Corner, Va., to 1420 New York Avenue, NW in Downtown D.C., according to a press release from West, Lane & Schlager Realty Advisors (WLS), which represented Interel in the deal.

Interel signed a 10-year sublease with law firm Skadden, Arps, Slate, Meagher & Flom for 15,500 square feet of space at the historic Commercial National Bank Building, according to a WLS spokeswoman.

“We undertook an extensive planning and alignment process to clearly understand their goals and vision, and conducted a detailed market analysis identifying all viable building options to find the best possible real estate solution to meet Interel’s short- and long-term business needs,” said Rich Lane, a principal at WLS.

The Commercial National Bank Building was built in 1917 and rehabbed in 1986 with an 11-story addition. It’s listed on the National Register of Historic Places and overlooks the Treasury Building, a block away from the White House.

“Being in Washington, D.C., close to Capitol Hill and the executive branch of government, is critical for our public affairs and association management business,” Bob Lewis, a managing partner at Interel, said in a prepared statement. “This exclusive real estate positions us in a strategic location where we are able to better serve our clients.”

JLL represented Skadden in the deal, said the WLS spokeswoman who would not disclose the asking rent at the Paramount Group building. Neither Paramount Group nor JLL responded to CO’s request for comment.

WLS is also coordinating the construction of Interel’s new space. “Interel’s work environment will be efficient and collaborative while retaining the flexibility needed to carry out all the functions of its multi-faceted business,” according to the release.

Previously known as the Association Management Group, the 90-person company based in Tysons Corner was acquired IN February 2017 by Brussels-based Interel and folded into its network of offices in more than 70 countries worldwide, per the release. Interel announced the acquisition stating that the companies would generate a comined $27 million in annual revenues and employ more than 200 consultants, staff and advisers. The deal allowed Interel to move into the U.S. market.