DC Retail Is All About Hanging Out 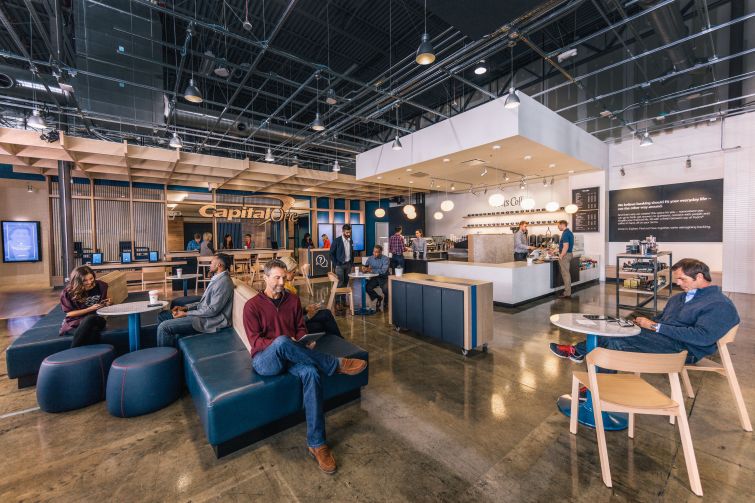 Capital One Cafe with Peet's Coffee. Courtesy of Capital One.

Sometimes, the key to a successful retail venture is a bright, shiny screen.

At least, that’s what AT&T is hoping.

Earlier this year, AT&T undertook a renovation of its flagship in Washington, D.C.’s Chinatown to include the installation of two new 90-inch televisions visible in the storefront.

“People walk by and they see the sports game on the television and they’re like, ‘We just wanted to come in and check the score,’ ” said Aleem McAllister, the retail sales manager at the Chinatown AT&T store located at 785 Seventh Street NW. “Then, we can talk to them about their wireless plan.”

Retail isn’t dead, but changes to major city centers like D.C.’s Chinatown reflect how businesses are shifting their focus towards becoming places where people can hang out, rather than get in and out quickly.

The large screens in the AT&T store run across the front wall of the store, which now boasts a sound system rivaling that of a home theater. Customers can sit on couches and watch HBO or play with tablets and other products—a far cry from the brick-and-mortar wireless carriers of the past, which showed their wares in displays hanging on the wall.

Before the renovation, which was completed at the start of 2018, the store had “a lot of space but there wasn’t a lot in that open space,” McAllister said.

The changes to the 8,698-square-foot store (which includes an upstairs, which underwent renovations after the ground floor’s work was completed) at Oxford Property Group’s building reflect a larger shift coming to the highly trafficked Chinatown neighborhood of Downtown D.C., and to retail more broadly, that favors customer experience over efficiency.

Chad Shuskey, the senior vice president of research and real estate at the Washington DC Economic Partnership, a non-profit public-private organization, likens physical retail locations in places like Chinatown to “having a big billboard in a great location”—it brings eyes and, hopefully, feet to the store.

With the Capital One Arena, the Regal Gallery Place Stadium 14 movie theater, the National Portrait Gallery and access to all of the city’s Metro lines, Chinatown is already one of the city’s busiest, and most expensive, neighborhoods, which makes it an ideal location for a flagship store.

“It’s almost like the Times Square of Washington D.C.,” said Norman Jemal, a principal at Douglas Development. Douglas serves as the landlord for the entire west side of the Seventh Street NW block between G and H Streets in the heart of Chinatown. “You’ve got the tenants who are there who want flagship locations, and tenants who are there for the incredible amount of density and foot traffic,” he said.

Douglas Development is also dipping its toes in the experiential pond, turning properties that once house a RadioShack and a Fuddruckers, a burger chain that no longer has D.C. outposts, into a 6,100-square-foot Capital One Café at 732-736 Seventh St. NW slated to open in the fall of 2018.

Why is a bank offering Peet’s Coffee drinks and pastries, free Wi-Fi and meeting spaces for community groups? The idea is to provide “warm, welcoming, physical locations where you can get the support and advice you need… Experience is central to the model,” said Lia Dean, Head of Bank Marketing and Retail at Capital One. “The café [will be] open to the public and we welcome all to come in for whatever need they may have.”

Capital One has already opened its café concept in locations like Boston, Chicago, Denver, Boulder, Los Angeles, Philadelphia, Richmond, San Francisco, South Florida, Seattle, Austin and St. Cloud, Minn., with plans for another one in D.C.’s Georgetown neighborhood scheduled to open its doors in 2019.

Newlin said that this is a way for Capital One to differentiate itself. “Look at what a normal bank lobby or ATM foyer looks like, and look at this,” she said. “Ultimately the goal is having a relationship—[the customers] come to you, they trust you.” And gratis internet is one major way to lure people inside.

Folks hankering for free Wi-Fi on that Chinatown corridor don’t need to wait for the Capital One Café’s ribbon cutting, though.

They can head right across the street to Studio Xfinity, a nearly 9,000-square-foot Comcast store at 715 Seventh Street NW with a full coffee and refreshment bar, a virtual reality station, a bevy of different seating areas and a 70-person lounge where store designers hope members of the community will meet up to use the free Wi-Fi, watch movies, or host events. It opened this past November in a space that formerly housed a City Sports, a more traditional retailer that filed for bankruptcy in 2015 and closed nearly 20 of its East Coast stores.

“The Washington, D.C. market has been a growing hub for Comcast and other retailers for several years,” said Tom DeVito, the senior vice president of retail sales and service at Comcast Cable. “The Chinatown neighborhood offers an excellent mix of residential, retail and event-driven foot traffic.”

Studio Xfinity’s model encourages people to hang out in the space. During the Winter Olympics, for example, the store played events like curling on its 15-foot screen.

That gels with trends developers have been observing, Jemal said. “Creating community seems to be something that everyone seems to be working towards.”

Shuskey added that “retailers are in experimentation mode right now. With the rise of e-commerce, retailers are having to do more to differentiate themselves.” That being said, Shuskey thinks that headlines indicating that brick-and-mortar retail is dead are overblown.

Most shoppers want a mix of online and physical retail to make purchases. According to a 2017 survey from Harvard Business Review, 7 percent of customers were online-only and 20 percent were store-only. A staggering 73 percent used both, meaning that physical stores continue to play a big role in the shopping process.

Shuskey pointed to e-commerce purveyors like Warby Parker, which began online and later added physical locations, and Amazon, which both purchased Whole Foods and is opening bookstores, as evidence of the staying power of brick-and-mortar stores, especially in prime locations like Chinatown.

Having a conventional store isn’t just about sales, either. Getting people in the door is “about selling products, but it’s also about getting data on your potential customers,” Shuskey said.

Enticing people to provide that information often requires giving something in return, like, say, free Wi-Fi.

David Dochter, a principal at Dochter & Alexander Retail Advisors, said that retailers are now looking to build a “completely different mousetrap: you want people to explore and stay. You want a certain excitement to be there. You want to stimulate them. Traditional retail was more about efficiency, to get a product or a commodity into your hands.”

The advent of online retail has changed that calculation. “You don’t need to go to a store anymore to get a widget,” Dochter said. “You’re going there to get immersed in an environment, a culture, a brand.”

Apple is the most prominent example of a retailer offering this kind of shopping. The tech company pioneered the kind of interactive experience that Dochter described as “a more social, a more educational, a more immersive environment. Apple allowed the consumer to explore and learn, provided brand awareness, and, on top of all that, it sold a product.”

Apple’s retail stores, which the company call “town squares,” continue to be among the most profitable retailer when it comes to sales per square foot. Data from eMarketer and CoStar Group released last summer found that Apple sells $5,546 worth of products per square foot annually, besting all other retailers by that metric.

One of those Apple stores will soon open up a few blocks from Chinatown at the Carnegie Library in Mount Vernon Square, a property at 901 K Street NW that is owned and managed by Events DC, the city’s official sports and tourism authority.

The historic designation of the Carnegie Library means that any external logos and signage must be reviewed not just by Events DC, but also by the National Capital Planning Commission and the U.S. Commission of Fine Arts.

But most of the other Downtown buildings have significantly more flexibility than that. Landlords and property managers can sweeten the deal for retailers seeking a place for their more experiential outposts by letting them customize those elements. “The external real estate—the storefronts, the doors—are all much more relevant than they were in the past,” Dochter said, adding that retailers “want the entire experience to be appropriate for what they want to convey.”