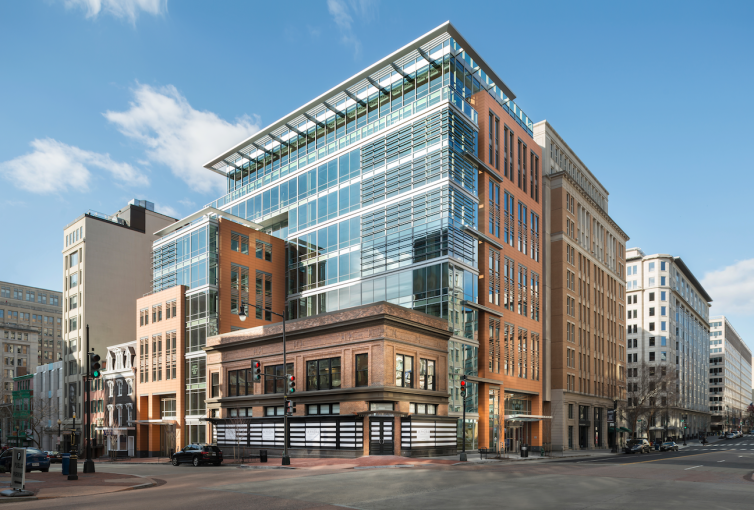 Washington, D.C.-based Douglas Development Corporation has secured a $52.8 million loan to refinance its newly constructed office building in the city’s Penn Quarter neighborhood, according to an announcement from Natixis, the lender behind the mortgage.

The floating-rate financing will support the lease-out phase of development for 1000 F Street Northwest, which stands between 10th Street Northwest and 11th Street Northwest about five blocks east of the White House. Constructed in 2016, the building’s design retained and incorporated a two-story historic structure at the corner of 10th and F streets, now enveloped by a newly built, L-shaped glass and brick fabrication.

The 93,000-square-foot complex has secured tenants for just 30 percent of its floor space to date. A Sephora cosmetics shop and GRK, a casual restaurant that serves Greek food, are among the early takers for the building’s 7,000-odd square feet of ground-floor retail space.

Asking rent for office space ranges from $55 to $59 per square foot per year, according to data from LoopNet.

The building’s proximity to federal office buildings will be a major driver of demand for 1000 F Street, according to the Natixis announcement: the main offices for the Department of Justice and for the Internal Revenue Service are a stone’s throw away. The neighborhood is also fertile ground for the performing arts, with several major concert halls and stages—including Ford’s Theater, the site of Abraham Lincoln’s assassination a century and a half ago—all within a short walk.

A representative for Douglas Development wasn’t immediately available for comment. The firm, working out of offices elsewhere in D.C.’s Northwest quadrant, controls a portfolio of 300 properties, and makes a specialty of refurbishing celebrated old buildings.

In a metropolis whose frustrations with a creaky subway system have boiled over in recent years, a two-level parking garage for 45 cars lies below the office tower. Higher up, verdant terraces jut at several levels into the city’s height-restricted skyline.