Who Does LA River Development Benefit? 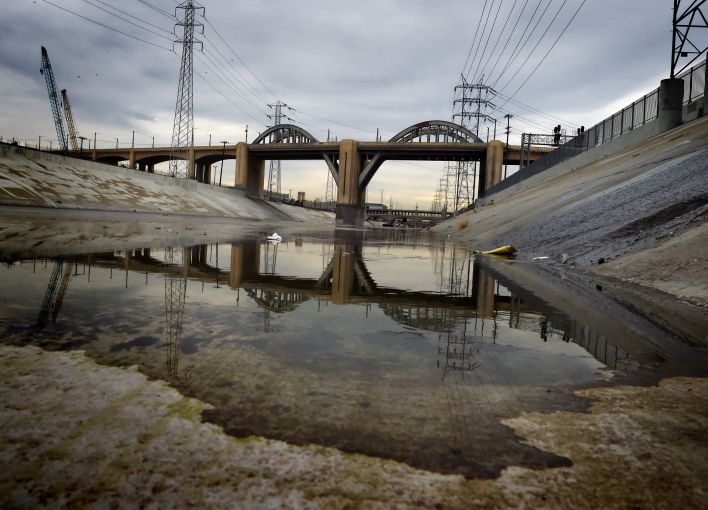 The L.A. river that winds its way over 51 miles in Southern California is the subject of long-desired plans to retain its crucial role as a flood-control channel for the city, while revitalizing the role it can play in the city’s life. The city’s master plan for the waterway, an update to the plan adopted by the county in 1996, focuses on the 32 miles of the waterway within the city. Led by L.A. County Public Works, with support from engineering firm Geostyntec, the project has brought on board celebrated architects and design firms, Gehry Partners and OLIN under the nonprofit umbrella River LA.

There are a whopping 240 public and privately developed projects affiliated with the plan with time frames ranging from immediate to 20 or more years to implement. These include the Michael Maltzan-designed Sixth Street Viaduct and public park connecting the Arts District and Boyle Heights, the redevelopment of the Art Deco Lincoln Heights Jail into a mixed-use development and turning the river-adjacent Taylor Yard G2 parcel—44 acres of old Union Pacific rail yard near Cypress Park into an expansive public green space and creating bicycle paths along the channel.

Stakeholders involved in the billion-dollar, multi-year behemoth spoke at a panel on the master plan at SPF:architects in Culver City last week, discussed the current swath of developments, from bridges to parks, to bicycle lanes along the river channel and the balance of concerns—from gentrification to the ecological.

“This is a revitalization plan, not a redevelopment plan,” said Deborah Weintraub, the chief deputy city engineer and architect at the bureau of engineering for the City of Los Angeles. “The L.A. River is a line that crosses the city like nothing else. It will always remain a flood channel, but there is a lot we can do to make it integral to the life of the city.”

Helen Leung, the co-executive director of LA-Mas, a non-profit urban design organization, said that “some people win and some lose. How do we maximize who wins?”

Mark Motonaga, a partner at Rios Clemente Hale Studios, the Los Angeles-based design firm behind the redevelopment of the Lincoln Heights Jail,

said that the river revitalization was as “political an entity” as what “Mulholland did with water.” (William Mulholland, the first superintendent and chief engineer for the Los Angeles Department of Water and Power, is infamous in the history of California and the state’s water wars. Among his underhanded maneuvers was blocking the Owens River irrigation project so he could divert the water supply into the San Fernando Valley where a syndicate of private investors—many friends of Mulholland—were scooping up land with the assurance that, with the irrigation supply, their land value would skyrocket. Film buffs may recall his fictionalized portrayal in the 1974 movie Chinatown.)

He spoke about how the impact of the river development is not uniform across the board even within the same communities, like in Atwater where he recently purchased a home after renting for years.

“What gets built and who does it serve? For renters and homeowners, it’s not the same,” he said, pointing out how increased home values favor owners, while an uptick in rental costs can drive out long-time renters.

Yuval Bar-Zemer, a co-founder and managing partner at Linear City Development, a Downtown L.A.-based developer of mixed-use urban infill communities, noted that home values had tripled in the Elysian Park area near Dodgers Stadium just upon news that the city had successfully acquired the 42-acre G2 parcel, considered the “crown jewel” of the billion-dollar river restoration projects in 2017.

“It’s myopic not to address this at the city level. We have to acknowledge that these efforts don’t happen out of thin air. These are major political, economic interventions,” said Bar-Zemer. “Millions and close to a billion in taxpayers’ money is being used. When we are creating an infrastructure benefit, there has to be the same amount of thought and energy that goes into the policy to make sure the benefits spread more reasonably.”

Weintraub concurred. “I completely agree that this is a citywide issue and one that evolves as the population and generations evolve,” she said, noting that the city was having those “conversations about affordability” citing the mayor’s championing of a linkage fee on new development aimed at funding affordable housing. “It’s not about a specific project and gentrification impact. It’s about the larger citywide policies. We won’t remain a vibrant and diverse culture if we don’t address issues of affordability. Coming out of WW II, we built houses for the masses and we need to do that again, and understand the value of doing that.”