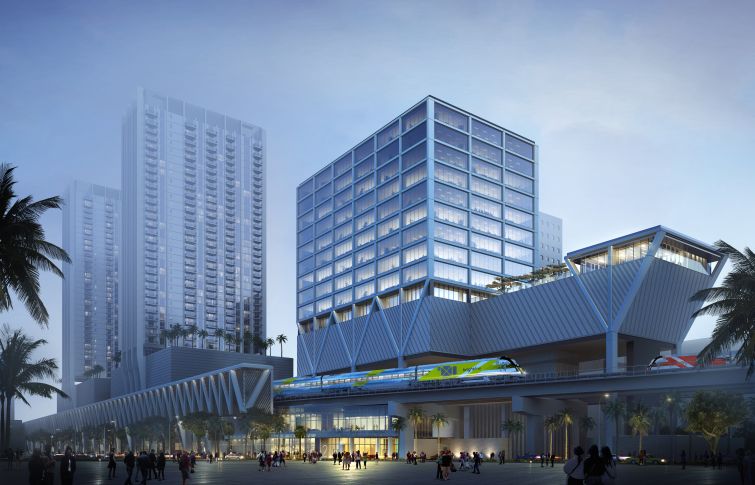 In a deal associated with one of the largest recent infrastructure projects in the country, Wells Fargo announced today it was the lender behind a $103 million mortgage to support the development of mixed-use buildings at the Miami terminal for Florida’s Brightline railway.

The mortgage closed in September 2016, but wasn’t made public until this week.

The loan backs construction and development on two towers, Two MiamiCentral and Three MiamiCentral, adjacent to the southernmost station on the new railroad connecting West Palm Beach, Fla. and Miami, with a stop in Fort Lauderdale. The multi-billion-dollar railroad project, developed and operated by Florida East Coast Industries, marks the first privately owned passenger railroad in the United States since the early 1980s.

Florida East Coast Industries, as developer of the train’s Miami terminal, also serves as the sponsor of the Wells Fargo loan. Two MiamiCentral, a 10-story, 190,000-square-foot tower connected directly to the train station, is in the last stages of construction, with completion expected later this month. Three MiamiCentral, which comprises 130,000 square feet of commercial a block west of the station, was finished in December of last year and is 95 percent leased, as per Wells Fargo.

As for why Wells Fargo waited two years to announce the financing, a spokeswoman said there was no particular reason.

Tenants in that building include Brightline itself, construction firm HNTB and Viacom, which will relocate the headquarters of its MTV Latin America network to new offices at the site. Last week, Florida East announced it had signed a new lessee for 17,000 additional square feet: Confederation of North, Central American and Caribbean Association Football, the governing body for soccer in North America.

At Two MiamiCentral, the building yet to be completed, Florida East has already signed up EY, media firm Cisneros and Moss Construction as committed tenants.

“MiamiCentral is a generational project…to connect South Floridians via Brightline,” M. Bruce Snyder, the CFO for Florida East Coast Industries, said in a statement. “We are extremely pleased to have partnered with Wells Fargo on…the development of two of the most prolific mixed-use buildings…in Downtown Miami in recent memory.”

The office towers’ proximity to a train station that will host thousands of commuters made the loan an opportunity Wells couldn’t pass up, Scott Primeau, a banker in its South Florida office, said.

“The train really was the difference-maker,” Primeau said. “It’s in the northwestern section of Downtown Miami, which was predominantly a government center—there wasn’t really a private office building in the area. It’s really changing this part of Downtown Miami.”

Construction on the railroad kicked off in 2014, and the first phase of the $3 billion project opened earlier this year. Weekday trips from West Palm Beach to Miami, a 65-mile journey, cost $15 to $25 and take about an hour and a quarter. The railroad company is set to begin construction this year on a second phase that will break northwest from West Palm Beach to Orlando International Airport, another 140 miles away.

America hasn’t had a private intercity rail line since 1983, the last year of operation for the Rio Grande Zephyr—a train that brought passengers between Denver and Odgen, Utah.