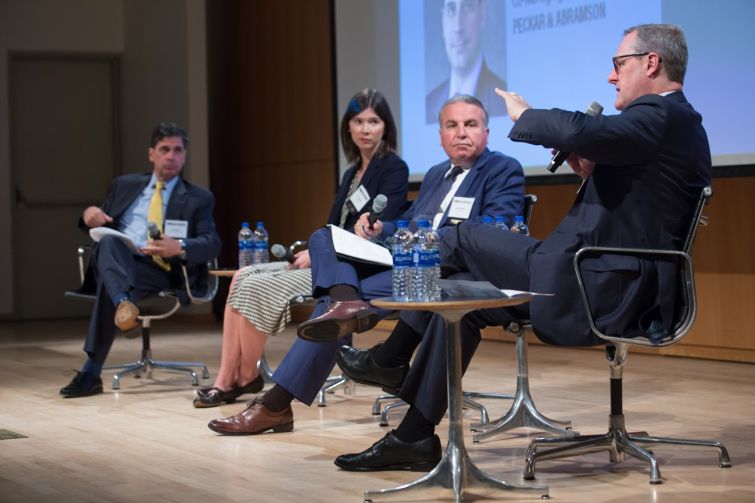 New York City’s waterways and its 520 miles of coastline were top-of-mind for infrastructure players at Commercial Observer’s Transportation and Infrastructure Construction Forum, held at the City University of New York Graduate Center in Midtown Manhattan today.

Rezonings in recent decades along the East River have brought waves of new residents and businesses to waterfront properties. And given that North America’s largest city comprises four distinct land masses, moving people and freight over, under and across its rivers presents one of the region’s most distinct challenges–especially as ground transportation has descended into hopeless gridlock.

“If you look at streets, roads and highways, we’ve all seen the congestion,” Tom Wright, president of the Regional Plan Association, said. The need for improved cross-river transit, in turn, has become all the more dire.

Most crucial is completion of the Gateway Program, a multifaceted project backed by Amtrak, New York and New Jersey to improve rail capacity under the Hudson River. Petra Messick, Amtrak’s head of planning for the improvements, said that thanks to damage from Hurricane Sandy, the two tracks that connect Penn Station and Newark are at constant risk of becoming unusable, rendering work on a parallel tunnel essentially an infrastructure emergency.

If one of the existing tunnels failed before the replacement is done—2026 at the earliest, Messick said, “we would essentially have to cut service down to one-track operations, a 75 percent cut. That would have a devastating effect on the economy.”

As always when dealing with massive infrastructure projects, sticker shock is an ever-present concern. All told, the entire Gateway Program is estimated to cost about $30 billion, a spokesman for the project said. Former New Jersey Governor Chris Christie canceled work on a similar project to redirect its funding, and the Gateway Program is still seeking federal grants that the Trump administration’s Federal Railway Administration has yet to approve.

Government agencies aren’t the only ones feeling the burn of higher project values. When moderator Paul Monte of Peckar & Abramson announced a question-and-answer session, one construction executive who didn’t give his name prodded panelist Wahid Albert, the chief engineer for the New York State Department of Transportation, about the disappearance of smaller, $5 million to $10 million public contracts in favor of megadeals that only the largest firms can vie for.

“Well, nothing costs $5 million [in New York City] anymore,” Albert said wryly. His department doesn’t relish having to tackle dozens of major projects at once, he continued, but given the region’s needs, there’s no choice. “We get a bigger bang for our buck when we bundle projects.”

Even so, if public agencies can secure the requisite funding, forthcoming transit projects stand to represent a windfall for builders with deft shovels. Work continues apace on East Side Access, the MTA’s project to bring Long Island Rail Road service to Grand Central Terminal. (Today, the commuter line only serves Penn Station.) And Albert said that his dream project at the DOT is a tunnel under Long Island Sound connecting the populous suburban island to Connecticut that would cost $50 billion.

“We’d have concerns” about the cost-efficiency of such a tunnel, Wright said.

More buoyant sentiments prevailed among industry leaders concerned with transit along waterways—not under them.

“We’re looking for ways to more efficiently switch trips from automotive to barges,” Seth Myers, an executive vice president at the New York City Economic Development Corporation, said, referring to the movement of freight around the city. “There are increased cross-river connections. How can we build on that?”

One counterintuitive result, Port Authority engineer James Starace explained, is that environmental leaps in water quality have made it harder to maintain wooden piers.

“Cleaner water has brought challenges,” Starace said, explaining to moderator Justin O’Horo, of Withum, how a renaissance of molluscs and crustaceans in the waterways has sped erosion of underwater structures dating from the early 20th century.

To make such facilities more sustainable, the Port Authority committed $500 million to renovate 15 of its piers around the city, Starace said. Richard Cote, a waterways vet with Hudson Meridian Construction, said that coating timber with newfangled epoxies could held dissuade hungry creatures from chowing down on the wood.

In every aspect of improving transit between the region’s landforms, panelists agreed, a proactive approach is paramount.

“Time is not on our side,” Wright warned. “When we delay making investments, they go up dramatically in cost.”