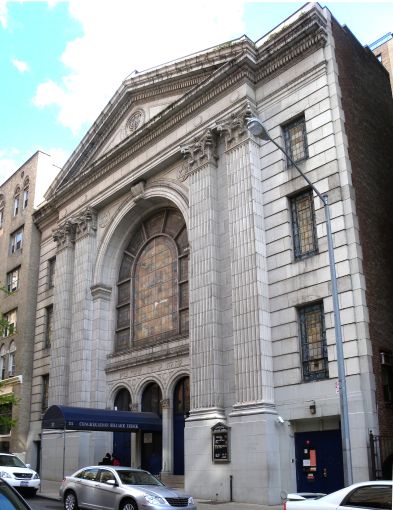 The prior Shaare Zedek temple, slated for demolition. Photo: Wikicommons

A Jewish congregation on the Upper West Side has partnered with a developer to snag $40 million in financing supporting the construction of a new synagogue and apartment building, property records show.

The mortgage, backing a project to replace Shaare Zedek‘s 180-year-old temple at 212 West 93rd Street, was funded by Bofi Federal Bank, a branchless institution headquartered in San Diego. The debt is split between a $7.2 million project loan and a $32.8 million building loan.

Facing fiscal woes, the congregation’s president, Michael Firestone, sought a developer last year to purchase its centuries-old synagogue and replace it with a mixed-use building that would include space for worship, DNAInfo reported last year. Firestone found a partner in Ornstein Leyton, a Garden City, N.Y. firm that will build a 14-story building at the site planned to include 20 condominium units and more than 9,000 square feet for the religious community.

Ornstein Leyton paid over $34 million for the property. A group  of local residents tried to win landmark status to save stately neoclassical temple that now stands at the site, but the Landmarks Preservation Commission turned them down.

Representatives for the congregation, for Bofi and for Ornstein Leyton did not immediately respond to inquiries.