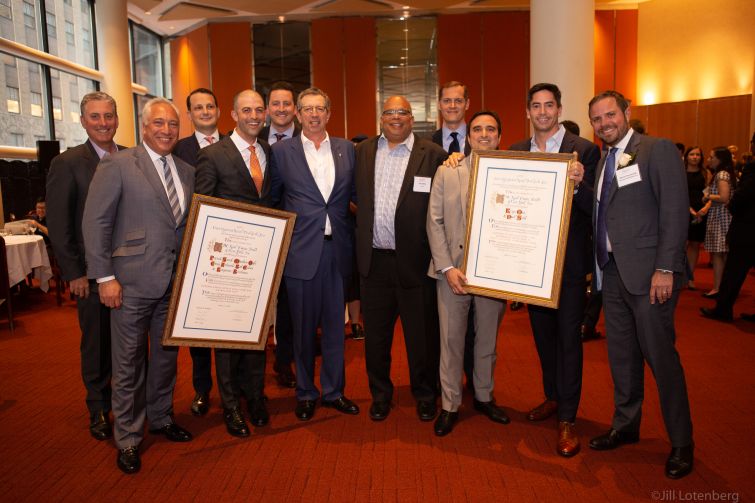 C&W’s Kenji Ota and Neil Seth received the “Most Significant” award for their work in helping iconic toy retailer FAO Schwarz relaunch at Tishman Speyer’s 30 Rockefeller Plaza, where it signed a 24,000-square-foot lease for a new flagship location—reestablishing the brick-and-mortar presence it lost in 2015, when FAO Schwarz shuttered its longtime store at 767 Fifth Avenue. The new three-level store is set to open this fall in time for the holiday shopping season.

The “Most Ingenious” award went to JLL’s Patrick Smith, Matthew Ogle, Corey Zolcinski and Bob Gibson and NKF’s Benjamin Birnbaum, who were recognized for their work in bringing indoor cycling fitness concept Peloton to Brookfield’s Manhattan West development on the Far West Side. Peloton signed on for 32,000 square feet at 5 Manhattan West, including more than 26,000 square feet of retail, fitness, media production and event space and nearly 6,000 square feet of office space. The JLL team represented Brookfield while NKF represented Peloton.

The evening, once again held at Club 101 at 101 Park Avenue in Midtown, saw Ota win his second consecutive “Most Significant Retail Deal of the Year” award; he earned the honor last year for his work in arranging the National Football League and Cirque du Soleil’s 40,000-square-foot retail and entertainment concept at 701 Seventh Avenue in Times Square.

“The people involved [in the FAO Schwarz deal at 30 Rockefeller Plaza] were very flexible and professional in the way they handled the negotiation,” Ota told Commercial Observer. “There was a timeframe [FAO Schwarz] needed to be open by this [coming] holiday season and we had to condense [negotiations].”

When asked about winning the award in back-to-back years, Ota cut a humble figure. “[I’m] lucky enough to work on these types of deals,” he said.

JLL’s Smith took home the fourth REBNY Retail Deal of the Year award of his career, while colleagues Ogle and Zolcinski each received the second of their respective careers. Smith told CO that he believes Peloton’s experience-based concept at 5 Manhattan West “is really indicative of where retail is headed.”

Also in attendance at Club 101 was Michael Goldban, Brookfield’s senior vice president of retail leasing, who praised the JLL and NKF brokers involved in the Peloton deal for bringing in a tenant worthy of Brookfield’s lofty ambitions for Manhattan West.