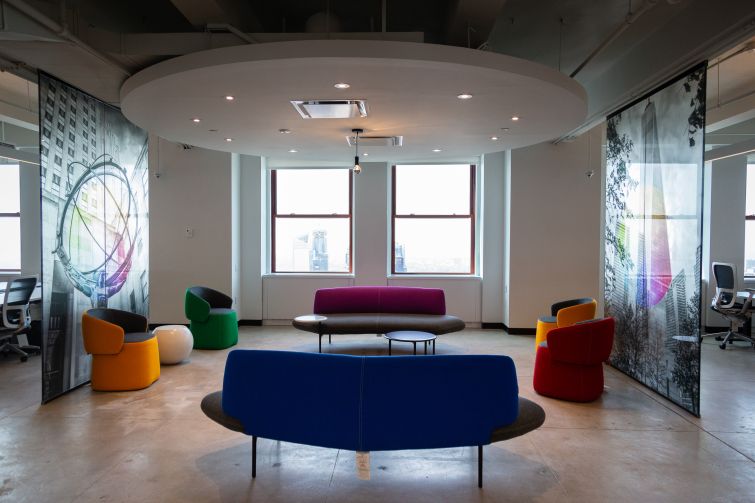 Relaxed seating can be found all over the office, as well as images of popular New York City places. PHOTO: Kaitlyn Flannagan/Commercial Observer 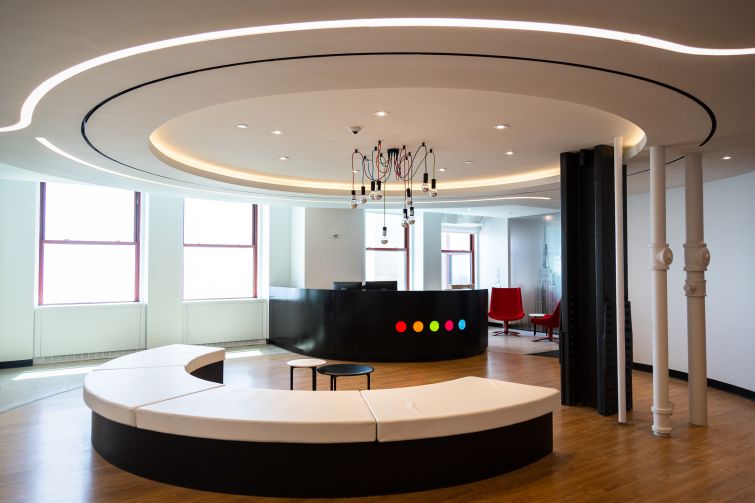 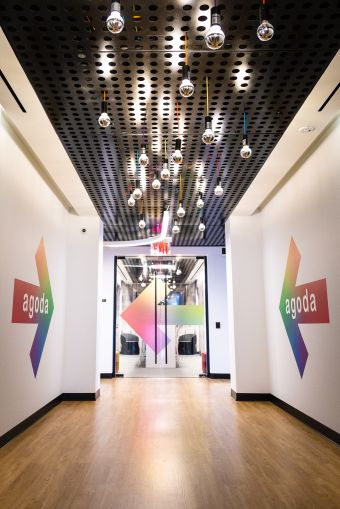 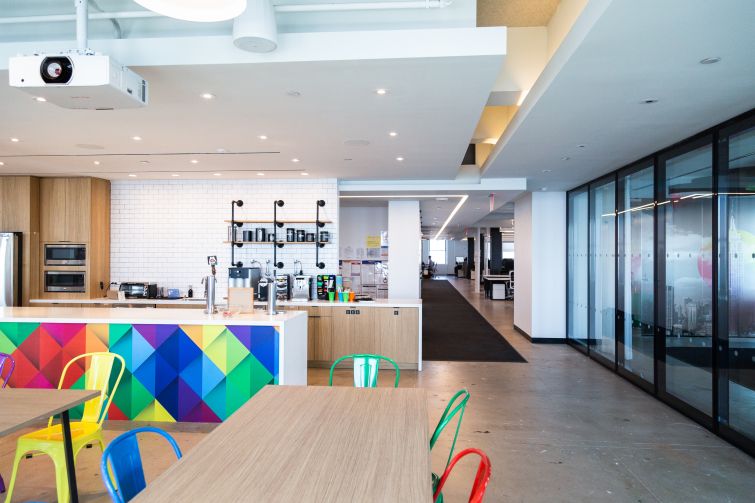 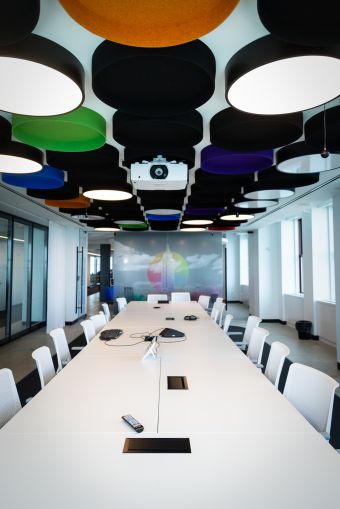 The 24-seat board room can be combined with the pantry to make a town hall space. PHOTO: Kaitlyn Flannagan/Commercial Observer 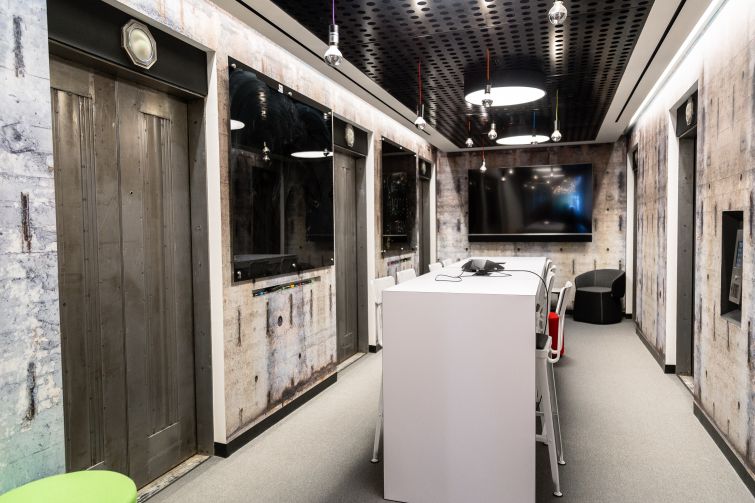 It’s not unusual to see a modern office with stripped steel columns, exposed ceilings and concrete floors, since the raw, converted warehouse look is still trending.

It’s slightly weirder to see it in the Empire State Building.

However, that’s exactly what construction manager James E. Fitzgerald did for online travel company Agoda (a sister of Priceline, Kayak and Booking.com) in its new offices on the entire 27,000-square-foot 66th floor of the most famous building in Gotham. The tenant wanted a raw space that revealed the vintage of the iconic tower, even if that meant the plumbing lines were visible near workstations and the reception desk.

“It’s a look you have to be willing to accept. You could say it speaks to the history of the building,” Michael DeLisio, a principal of James E. Fitzgerald, told Commercial Observer during a recent tour of the offices. “I think they committed to having a more progressive look but a less refined look. They prefer seeing the [bones of the] structure.”

Agoda moved into the space in early April. Architecture firm Vocon, which designed the space for the tenant, created a custom art piece with light bulbs hanging from metal grates on the ceiling overhead from the elevator bank. Giant colorful arrows direct to the entrance of the office, where a similar artsy chandelier of light bulbs greets guests. The offices were designed with an open-floor plan for about 50 employees.

The company’s logo of red, yellow, green, purple and blue dots is proudly displayed in a few ways throughout the office: backlit dots on the reception desk and circular carpets under a row of high-back chairs facing windows with views of Midtown South and Downtown.

Instead of flanking the four corners of the office with private offices, it installed workstations on the rim and the larger of two pantries giving employees full access to the killer views. In addition, images of Rockefeller Center, the New York City skyline and popular buildings are posted on walls around the office.

“Agoda craved a unique design that would highlight their colorful brand as well as the magnificent views captured within the space,” Lance Amato, a principal of Vocon, said in a prepared statement. “Vocon accepted that challenge by creating a New York-centric design that pulled together the traditional finishes found all around New York while introducing their five unique brand colors by way of graphics and furnishings.”

There are about seven conference rooms of varying sizes with audio reduction fabric on the walls, dropped ceilings and carpeting—and one has a Nintendo Switch video game console. Plus, there are seven private rooms for phone calls, and a few relaxed seating areas and a passkey locked ideas room, which was created from a deactivated elevator bank on that floor. (The elevator doors are landmarked so they are still there although the cabs bypass that floor.)

The 24-seat boardroom has soundproof, double-pane glass walls, and the adjacent pantry (the one we mentioned earlier) has a variety of colorful chairs, two microwaves, a refrigerator, beer on tap, and a collection of snacks, including fruits and nuts.

The glass walls of the boardroom can be removed to combine the space with the pantry for company-wide town halls, although CO was told the company utilized this feature recently for a rocking Cinco de Mayo party. Hey, now that’s an Empire State of mind!