The Bronx Industrial Market Has Seen a Big Uptick in Activity 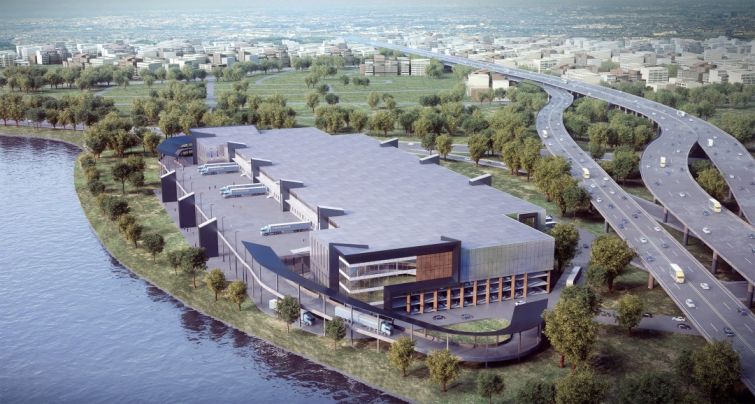 It’s been just three short years since Andrew Chung founded his development company Innovo Property Group, yet he is leading the charge in developing the biggest new industrial property in the Bronx—an 840,000-square-foot mega-distribution center.

And consider this: Chung graduated from The Bronx High School of Science.

He has watched the area evolve through the decades as he rose to the level of partner at The Carlyle Group’s real estate arm until he left to form Innovo.

“The borough is very dynamic with convenient access to public transportation, a great labor pool and unparalleled access to Manhattan and the boroughs via bridges, tunnels and highways,” Chung said in a prepared statement. “From Jet.com’s new warehouse lease to FreshDirect’s new headquarters, the Bronx is back.”

Innovo and Square Mile Capital Management acquired the defunct Whitestone Multiplex Cinemas site at 2505 Bruckner Boulevard in September last year for $75 million from Extell Development, according to property records. The developers will demolish the building to construct the KSS Architects-designed two-story distribution center by 2020, according to a spokeswoman for Chung. The property will be well linked for transportation as it sits at the intersection of the Cross Bronx Expressway, the Bruckner Expressway and the Hutchinson River Parkway.

Innovo and Square Mile are hardly the only real estate players who have seen the light in the Bronx; within the past few years developers like Somerset Partners, Brookfield Property Partners, Savanna and Youngwoo & Associates have rushed into the Bronx for residential and commercial projects. But thanks to the boom in e-commerce retailers, and the Bronx’s easy access to Manhattan, New Jersey, Westchester and Queens, and lower prices to rent or buy  properties (than other boroughs), the Bronx has become a treasure trove of opportunity for industrial properties. And larger companies (developers and tenants) are jumping into the Boogie Down Bronx.

FreshDirect is planning to open its 650,000-square-foot offices and distribution center in the Bronx later this year at 2 St. Ann’s Avenue in the Port Morris section. It is making the move from Long Island City, Queens. Meal delivery service Plated took an 84,000-square-foot space at 511 Barry Street in 2015 in Hunts Point for its distribution services. And another food delivery company, Marley Spoon, took 20,000 square feet at Simone Development Companies’ building at 300 Manida Street in 2016, moving its operations from Long Island City.

But industrial brokers and developers are still buzzing about online retailer Jet.com’s 205,400-square-foot lease for the entire warehouse at 1055 Bronx River Avenue. The asking rent in the April transaction was $22 per square foot, as CO reported, and the Walmart-owned company is expanding its tri-state operations to help in its rivalry with the obvious e-commerce king, Amazon.

Real estate investment trust Prologis, which owns 683 million square feet of industrial property on four continents and has $81 billion in assets under management, purchased the building at 1055 Bronx River Avenue in January 2017 for about $28.3 million, according to property records. Then came the renovation.

For the San Francisco-based Prologis, it was its first Bronx purchase, a spokesman confirmed, but declined to comment about the Jet.com transaction.

The Jet.com deal is reflective of the need for online retailers such as Amazon and Zappos, to have “last-mile” destinations—or distribution locations closer to consumers so they can get packages to them within a few hours. (Chung’s team has been calling its development the “largest state-of-the-art last-mile multistory urban logistics facility.”)

“All of these folks were not here 18 to 24 months ago,” said CBRE’s John Reinertsen, who is marketing industrial property in the Bronx. “This has been a trend that everyone wants to get into. [This is the only option] unless they get the drones out.”

The owners have recently completed a $5 million renovation of the buildings, featuring new LED lighting, docking doors, and roofs; renovated windows and metal panel walls; fresh painted walls and ceilings, and seven drive-in doors. Spaces between columns in the building are around 100 feet, making it great for a last-mile delivery service, but they aren’t limiting their options.

“We don’t care which one comes to take the prize: We are marketing to them and traditional distributors,” Reinertsen said.

The average price for industrial buildings in the borough in the first quarter of 2018 was $206 per square foot, according to a report from Cushman & Wakefield. That is down from the same period in 2017 when it was $237 per square foot but is significantly higher than the lowest point in the decade: $115 per square foot in 2012. (And we’ll remind you that the investment sales market in 2017 went through a major downturn across the board.)

But a case in point for high prices: Modell’s, the sporting goods chain, is selling its 300,000-square-foot Bronx warehouse at 1500 Bassett Avenue in Morris Park for more than $100 million, as Crain’s New York Business recently reported. (That would work out to more than $300 per square foot.)

Currently, the asking rent for industrial space in the Bronx has risen to an average of about $18 to $22 per square foot from the “low teens” just a few years ago, according to Reinertsen and other brokers with whom CO spoke. That is still a discount to Brooklyn and Queens prices, where prices reach as high as $25 a foot, depending on the property. But despite the rising prices in the Bronx, leasing activity is up.

“We have more interest in our properties now than we have ever had before,” said Josh Gopan, the director of leasing for Simone Metro Properties, the leasing arm of Simone Development, which owns about 1.2 million square feet of industrial property in the Bronx. “I don’t see it slowing down any time soon.”

Simone Development completed construction of the ground-up, 70,000-square-foot warehouse at 535 Zerega Avenue in Castle Hill about two years ago and then leased about 15,000 square feet to DJ Ambulette Services (followed by another 15,000 square feet last year), which provides transportation for nursing homes, adult day care centers and hospitals. And in June 2017, it signed a 40,000-square-foot lease with the New York Road Runners so the organization could consolidate its three existing warehouses in the Hunts Point section of the borough.

The nonprofit running group, which organizes the TCS New York City Marathon and various other races around the Big Apple, took a 10-year, triple-net lease for in the single-story building and is using it as warehouse space for its race day materials. The asking rent was $16.50 per square foot.

Also, the developer has two leases out to tenants to occupy the entire 1185 Commerce Street, a 41,000-square-foot property that Simone Development recently renovated with upgrades to the sprinkler system, lighting, gas, roof and the curb, Gopan said. The asking rents were $20 per square foot, but Gopan declined to name the tenants since the deals haven’t closed.

“Industrial is certainly not a dirty word. It is in vogue in a way,” he said. “Because it goes hand in hand with e-commerce. And that’s the fastest growing industry in the United States.”

As the increased interest in industrial spaces continues to rise, rents are rising because of a limited supply of industrial property.

From the decade between 2007 and 2016, the Bronx lost 124 industrial lots, amounting to 1.05 million square feet, as a result of the rezonings of land for manufacturing and industrial uses, as per an Ariel Property Advisors analysis. And in March this year, the City Council voted to rezone 95 blocks along Jerome Avenue from industrial uses to mixed-use residential, to encourage the construction of 4,600 units, as CO recently reported. This could inflate industrial rents even more.

“[The city] is not rezoning anything from another zoning to industrial,” said Jonathan Squires of C&W, who brokered the sale of the industrial building to a contracting company at 429 Bruckner Boulevard for $11.5 million with colleagues Karl Brumback and Robert Knakal last month. “Not only will you have worsening supply constraints, but you’ll have all of those industrial tenants displaced looking for space in the Bronx.”

Not everyone is feeling fired up about the industrial sector in the Bronx at the moment.

While asking rents in the Bronx are as high as the low $20s per foot, Neil Dolgin of brokerage Kalmon Dolgin Associates said that the taking rents are falling to around $14 to $18 per square foot in the Bronx for most properties.

He said the quick rise in rents over the years has resulted in many tenants taking a step back from deals in the Bronx, causing landlords to drop prices. He pointed to a 30,345-square-foot building he is currently marketing at 580 Gerard Avenue, at which owner MS Realty completed a renovation with new windows, new roof and new sprinklers this past December. Tenants weren’t biting at $20 a foot, so space is now being offered at $16 per square foot.

“But we just can’t find the right tenant. I’ve had tenants from Queens looking at this property, and they say, ‘I can find something back in Queens that’s not more expensive, so we don’t have to move,’ ” said Dolgin, a co-president of Kalmon Dolgin, which concentrates in industrial properties around the New York metro area.

Dolgin said tenants aren’t jumping at the first available vacant space as they were last year. He stopped short of saying that the Bronx industrial sector is heading to a major downturn.

“I think it is a readjustment to prices,” he added, “because there was a big expansion period. Now people need to take a breather.”