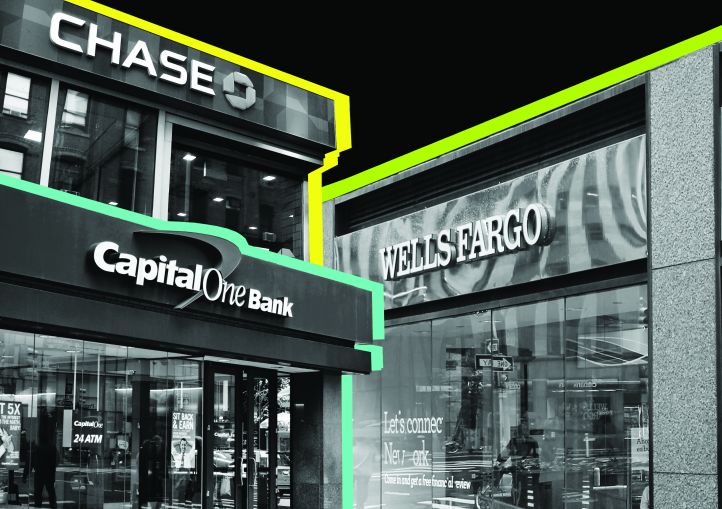 As Americans’ use of cash continues to decline in favor of cards and payment apps, bank branches—still among New York City’s most ubiquitous retail tenants—have begun to draw back their reach.

Wells Fargo, in an initiative it began last year, is in the process of closing 450 branches in the United States—about 8 percent of its network—by the end of 2018. And JLL reports that nationwide, the number of bank branches fell 2.2 percent last year to 89,900 from 91,900 a year prior. Of the country’s top 25 banks, only two finished 2017 with more branches than they had going in—and only then because they’d added branches in acquisitions. Last year, JLL’s analysts predicted that by 2022 the country could have 20 percent fewer branches, a reduction of 18,000.

Even though four of the top five private tenants in New York City are banks—including J.P. Morgan Chase with 5.2 million square feet, Citibank with 3.9 million square feet, Morgan Stanley with 3.6 million square feet and Bank of America with 3.5 million square feet, as per data from Cushman & Wakefield—that doesn’t necessarily reflect a commitment to a street-level presence. The New York metro area lost almost 7 percent of its branches between 2010 and 2017. Nationwide, of the 40 metro areas that JLL tracked, all but three lost branches over that period—and the remainder, Boston, Nashville, Tenn., and San Jose, Calif., barely held steady.

“Banking is not disappearing, but it’s certainly transforming,” wrote Walter Bialis, the JLL analyst behind the report.

The biggest force behind that transformation, of course, is the shift of financial services to the internet.

“Like everything else, banking is becoming more and more an online function,” said John Brod, a broker at ABS Partners Real Estate. “The days of large branches are on the wane.”

With the proliferation of apps that allow customers even to deposit checks online, banks haven’t shied away from asking depositors to walk a bit farther to do business in person.

“In general, I’ve seen a lot of the banks either retracting—not opening up as many new branches as in the past—or in some instances, actually giving up space where they can,” said Robert Kunikoff, an executive at MHP Real Estate Services who has represented banks in leases. “Instead, they’re forcing their customers to go online.”
Efforts to adapt to a more digital world might be most important for community banks that focus on small loans and customer deposits because those institutions don’t have large corporate, real estate or investment businesses to fall back on.

Popular Bank, the U.S. outpost of a Puerto Rico-based institution, is working intently to keep up. Greg Demas, a senior vice president at the bank, has led the institution’s efforts to renovate its 40 New York-area branches for an era when customers can handle most basic transactions online by themselves. Simply signing a lease for a new retail space is no longer the magnet for attracting capital that it used to be, he said.

“The days of opening more branches—of that being your way of raising deposits—have evolved,” Demas said. “The physical branch still plays a very central role, but it needs to be looked at in parallel with a rapidly growing digital space. It continues to change.”

For Popular Bank, those changes have meant tearing out loan managers’ cubicles and some teller windows in favor of open-floor plans, where employees can huddle with customers over handheld tablets to explain the bank’s saving and lending options. The institution is also installing ATMs that users can access with their phones, eliminating the need for debit cards and passcodes.

A positive side effect for the business has been that as customers visit in person less often, the bank can downsize its branches without cutting its capabilities.
“We’ve seen very large reductions in what we consider self-serviceable transactions,” Demas said. “As customers migrate to digital, that’s led to a significant reduction in traffic in our branches, [which has] led to the need for less square footage and staff.”

Branches that used to need 5,000 square feet can comfortably fit into 2,000, he explained, saving the bank on real estate expenses.

TD Bank, the American subsidiary of Toronto-based Toronto-Dominion Bank, is similarly taking stock of its retail operations in the face of digitization—although it’s not ready to pull back on storefronts just yet.

“TD currently has 1,245 branches, and…we’ll open up to 30 [more] in the next two years,” Erin Husenaj, a spokeswoman for the bank, wrote in an email. “We continue to make significant investments in developing and enhancing our online, mobile and ATM channels because we know our customers value these convenient ways to bank with us.”

That said, TD’s new branches won’t necessarily be more of the same.

“We are seeing a decline in ATM transactions like balance inquiries or account-to-account transfers, because mobile and online channels are much more convenient for customers to access when at home or on the go,” Husenaj wrote. “New stores will feature a different look and feel compared to ‘traditional’ TD Bank locations.”

Differences could include less space, new technology and new roles for branch employees, Husenaj said, although she did not elaborate on the specifics.

Those changes are part of banks’ efforts to stay relevant for depositors and borrowers whose financial needs revolve less and less around green slips of paper. A survey last year by U.S. Bank found that 50 percent of Americans carry cash less than half the time they go out. Of those who do, three-quarters said they keep less than $50 in their pockets, and half said their wallets store less than $20.

A slew of apps and payment platforms have sprung up to fill the void. Last year, market-research firm Verto Analytics estimated that 32 million Americans use Paypal each year to transfer funds or make purchases, representing about 15 percent of the country’s adults. Venmo, a competing service whose app mimics a social network, served 10 million—three-quarters of whom were under 35 years old.

And for those who still do rely on cash, the proliferation of inexpensive ATMs outside of banks means that fewer customers are making the trek to their nearest branch.
“People hardly ever go to banks anymore to just get cash,” said Connor Morton, an executive at Overland Park, Kan.-based ATM servicer Prineta. “The hotel they’re staying at has an ATM. The gas station has an ATM.”

Those ATMs usually charge fees. But with people carrying fewer bills at a time, they’re more likely to find themselves stranded without cash at a crucial moment when they’ll have to acquiesce to paying a few bucks to draw on their accounts.

Gas station ATMs also represent competition to banks because their machines are far less intricate and expensive than the ones banks install.

Unable to compete on pure convenience, banks are laying out significant expenditures to put top-flight workers and technology on offer at their branches, in an effort to make consumer transactions as effortless as possible. At Popular Bank, that means thinking carefully about who its branches serve. Demas, using the example of a branch on East 116th Street in Manhattan’s East Harlem, noted that the bank has picked staff capable of helping an elderly population, many of whom are native Spanish speakers, make sense of the bank’s digital offerings.

Elsewhere, that means big spends on technology. Bank of America is developing automated branches where customers will video chat with remote workers who can handle paperwork from afar, according to Bialis. (A Bank of America spokesperson did not respond to an inquiry.)

“Branch redesign is extending the internet self-service experience into a physical banking environment, providing financial institutions with the ability to replace clerical activities and focus branch staff to higher-value customer interaction activities,” Massimo Proverbio, an IT executive at Accenture, wrote in a recent report. “It is a space- and resource-optimization exercise…giving to the branch a completely new structure.”

Elsewhere in the world, the scene is much the same, even outside of first-world economies. Although the age of ATMs is just dawning in parts of the developing world, some of those countries are skipping the technology entirely. Even though 31 million more Brazilians have bank accounts today than they did in 2010, according the World Bank, the number of ATMs per capita has actually fallen, to 108 per 100,000 people today from 118 eight years ago.

And in India, ATMs appear to be far less relevant today than was promised just a few years ago. In 2014, the country’s prime minister, Narendra Modi, spoke of installing so many ATMs that there would be one within a 15-minute walk of every Indian—a significant achievement for a nation that had only 13 ATMs per 100,000 people that year. But as the decade has unfolded, the country’s currency infrastructure has twice proven rickety. In 2016, chaos ensued after Modi invalidated 86 percent of India’s money supply in an effort to combat corruption. (The banned bills could be exchanged for new ones at government offices.) And last month, banks and ATMs in eight of the country’s 29 states ran out of cash as black-market dealers hoarded the new government notes.

But even if developing nations wind up sidestepping the ATMs entirely, physical locations still have an essential role in consumer banking in many areas of the United States, according to independent bank analyst Christopher Whalen.

“In some communities, the physical branch is still very important. It’s in town: it’s where people go,” Whalen said. “In the Southeast, [people] will go, sit down, talk to the branch manager. They like branches.”

Granted, banks have consolidated across the country this decade, merging together to create regional titans. But that’s often a sign of just how much value institutions put on particular digs.

“Banks tend to [acquire] other banks for people, and for location,” Whalen said. “Some of these locations are gold, and you can’t replicate them.”