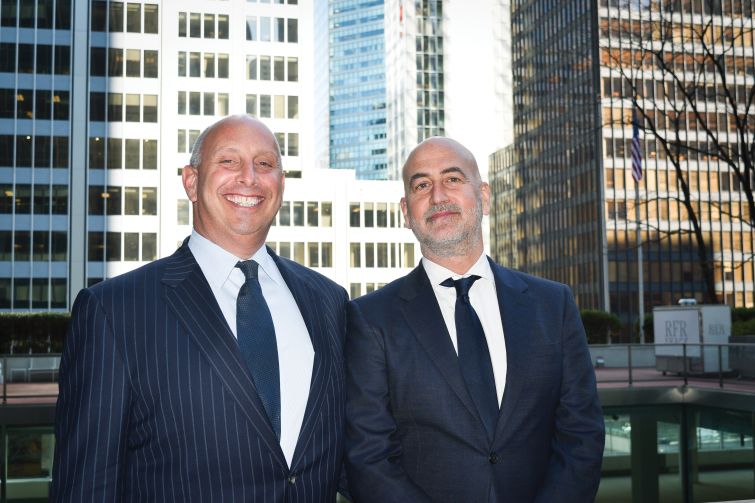 Widely known as an owner and operator of real estate, RFR Holding is now expanding its empire by upping its lending activity on the real estate opportunities in which it sees value. Sitting comfortably in the mezzanine lender spot, RFR has a quarter-century history of success that gives both borrowers and senior lenders comfort. The company recently closed a $98 million mezzanine loan on the Brickell Flatiron condominium project in Miami, and that’s just the tip of the iceberg. Commercial Observer sat with the two industry veterans leading RFR’s lending charge, Jason Brown and Mark Weiss.

Commercial Observer: You’re both industry veterans. How did you each get your start?

Jason Brown: I worked for Insignia/ESG when I first graduated college. When Aby [Rosen] and Michael [Fuchs] started RFR 22 years ago, it was just the two of them, and they were looking for an analyst. I was their first employee, and we’ve grown the business together over the years.

Mark Weiss: I came out of business school and worked at Goldman Sachs for 17 years. I joined its commercial mortgage-backed securities business in the 1990s when [the CMBS market] was really just starting and then I ran the real estate lending business for five years in the early 2000s. I then went to work at JER Investors Trust—a private equity fund. JER sponsored a mortgage real estate investment trust, which I ran for three years before joining RFR in 2009.

Does your experience as a borrower help you as a lender?

Weiss: We’re currently borrowing a couple of billion of dollars a year from a variety of lenders— securitized lenders, balance sheet lenders, debt funds—and I think that gives us a unique ability to look at things. We understand what it takes to get a deal done and what we look for when we’re borrowing money, so we have a very good sense for what other borrowers are looking for when they talk to a mezzanine lender.

Brown: When you look at our [nearly] 25-year track record and ability to pay back money time and time again, and our ability to buy an asset, renovate it, increase its value and ultimately sell it…I think doing what you say is key. We’ve built 15 ground-up residential assets, we’ve renovated hotels, and we’ve redeveloped office buildings. So people want to lend to people of our ilk because they know we have the skill set to develop and deliver on what we say we’re going to do. We also understand what lenders look for and the expertise we have makes those senior [lenders] in front of us [in the capital stack] more comfortable.

Why is now the right time for RFR to increase its lending activity?

Weiss: Pricing is very high for assets right now, and frankly it’s much more challenging for us to buy things. Our history is in buying, renovating and selling. That’s a challenge in New York with a lot of domestic capital and foreign capital competing to buy things at the moment. We’re not a fund that has to put out money, so we’re not going to chase an asset just because we want to do another transaction. We’re going to do a deal because we think we can make money. So when you look at the ability to make core-plus returns or even equity-like returns on certain mezzanine product and have 15, 20, 25 percent equity behind you, that feels pretty attractive to us right now.

Brown: Putting out passive capital has never been something that is interesting to us, because we’ve always been able to make the returns on the [equity] side. We’re OK with risk because we’re developers, so for us to be able to reduce the risk and still get a decent return and still be [invested] in assets that we like? That’s the most important thing.

What are some of your recent deals?

Weiss: We lent $100 million recently on a condo development in Miami [Bank of the Ozarks provided a $139 million mortgage and RFR Realty provided a $97.5 million mezzanine loan on Ugo Colombo’s Brickell Flatiron project]. It’s interesting because during the last cycle Miami’s condo market got hurt worse than any other market in the country. At the time, you could buy a condo there for 3 percent down. A lot of institutions got hurt and put a big, red “X” on Miami. But if you look at what’s happening in the condo market today you have to put 30 percent down, so the risk factor with condos in Miami has dropped dramatically. Assuming all the assets are sold, our basis is $11 per foot. We thought that was an incredible opportunity because we built the W Hotel in Miami and we own properties on Lincoln Road. Bank of the Ozarks is the senior lender and they know we can step in and finish the project. I think a lot of senior lenders go to sleep at night with a great level of comfort [with us as a mezz lender] as opposed to someone where if there’s a problem they’re going to have to bring someone else in to try to figure it out.

Are you targeting markets you are already in?

Brown: Well, New York, Miami, Seattle and Las Vegas we have great expertise in. But we’re also looking at a hotel in Nashville.

Weiss: Absolutely. Nashville is one of the hottest markets. It’s under-hotelled so with the right sponsorship and right food and beverage program it becomes interesting. We’re not interested in senior loans. Libor plus 300 is not that interesting to us. We want higher returns…It could be a hotel that’s been taken over because it’s been run into the ground. That’s where our expertise comes in, because we know how to build. So if someone says “We need to go through this renovation,” we can look at the plan and understand what it takes to turn it around and the timeline to get it done.

Brown: Ours is a real debt platform. Whether we call it mezzanine or preferred equity, we’re not looking to take over assets. We’re not in this to choke an investor and take over an asset. We’re there to make returns. If things go wrong we have the expertise to step in, but that’s not the motivation.

I assume that’s sometimes a concern for borrowers when transacting with lenders who are also owners?

Brown: When you have a developer that gets into the debt business I think the first reaction is, “Well, I’m not going to borrow from him, he’s just going to take over the asset.” That’s how we used to be here [at RFR]. But now one of those unnamed names we had concerns about is one of our best lenders.

What’s your competitive edge in the crowded mezz lending space?

Weiss: Our size, our flexibility in location and deal type and the ease of transaction. As long as there is a good senior loan document [in the deal] we’ll move quickly. I think that helps, and also the fact that RFR is not a huge institution and there are actual bodies to talk to here.

Is it still better to be a borrower than a lender?

Weiss: Being a borrower is not bad [laughs]. Rates are still fantastic. But there’s nervousness in the market around the asset types that we’ve actually found good opportunity in: hotels, condos and land. If you look at Times Square, it’s had a 30 percent increase in the number of available hotel rooms, so for people who financed their assets a couple of years ago when their maturities were coming due it’s a bit of a struggle to refinance it. It doesn’t mean that they can’t get the leverage necessarily, but it means that they’re no longer paying 500 over for that mezzanine piece, it’s maybe now 1,000 over.

Brown: But with condos, hotels and land we see a dearth of lenders. Not that we wouldn’t love to lend 80 percent on an office building, but there are a lot of debt funds chasing those deals which makes it a bit more of a struggle to get the returns that we want.

Brown: We’re looking at a condo development in Miami, we’re looking at a hotel in Nashville, a mixed-use, $500 million construction loan in Los Angeles. And we get calls on New York deals daily. We pass on a lot of things because it has to be something we like, but we have a full pipeline. We’ll decide what we think is a fair return on an asset, and if it’s right for our money at that time, we’ll do it. But we’re never going to chase 100 basis points.