CREFC: Perspectives on Changes in the Real Estate Sector 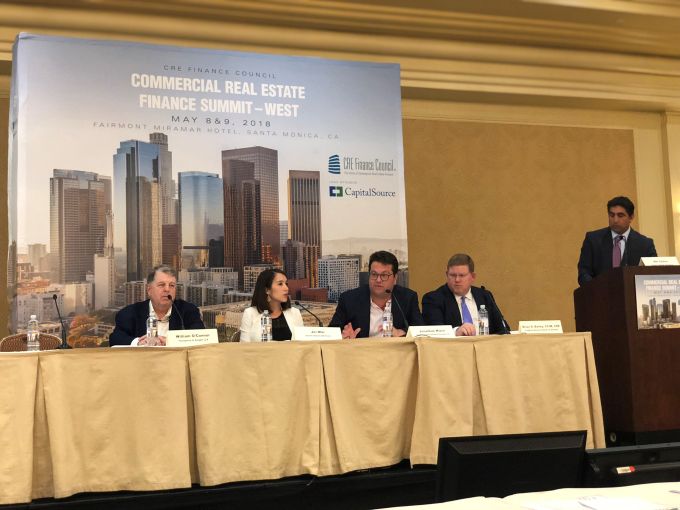 A lively opening panel, moderated by Nik Chillar, a principal and the head of banking at Crescit Capital Strategies, started the day.

“We do see a lot of dry powder sitting on the sidelines,” she said. “So that’s impacting what’s [happening]. Our odds on companies that are going to be [acquired] have increased substantially over the last couple of months. And we’ve seen increased activity there in the last couple of weeks,” she said, referencing Blackstone Group’s acquisition of Gramercy Property Trust a day before as well as the acquisition of DCT Industrial Trust by Prologis in April.

In terms of leverage, she said one of the reasons asset values haven’t decreased this late in the cycle is because the debt markets have been very accommodative.

“Debt lenders have been pretty disciplined [but] we’re starting to hear that [discipline] is eroding a little bit so that’s making us a little nervous in terms of where property prices are headed,” she said.

Mar expects cap rates to remain flat to slightly up over the next six months to a year, depending on the sector, with industrial the only sector where cap rates are still compressed and particularly for infill properties in gateway markets.

Retail on the other hand has seen cap rates increase significantly, which Mar said was somewhat driven by the negative news coming from the sector, though it also bifurcates depending on the asset type.

“We’re still seeing values hold for grocery-anchored neighborhood centers in gateway markets,” she said. “When you look at power centers in tertiary markets, or retail assets with any type of tenant bankruptcy risk, we’ve moved those cap rates up roughly 220 basis points in the past year.”

Brian Bailey, a senior financial policy analyst at the Federal Reserve Bank of Atlanta, concurred with Mar’s observation about the downturn in foreign investment.

“Compared to 2015 and 2016, we don’t see the same amount of foreign inflows having as big of an impact today,” he said. “At that point, we had a number of institutions that were coming to us and asking how foreign buyers were paying 20 to 30 percent more than they thought the market value was. We have seen that dynamic pull back a little bit. Certainly, we’re not seeing as much investors show up from overseas so the volume is not what it was in 2016,” he said.

And certain assets are attracting investors more than others, said William O’Connor, a partner at Thompson & Knight.

“If you have a multifamily in a primary market, of course everyone is going to chase that deal. A hospitality deal in Dubuque, you’re not seeing very many buyers, but I think a lot of our peer group is seeing just a thinner pack on the buy side as well,” he said.

The special servicing sector—once an area awash with activity as the tidal wave of 2007 and 2008 maturities moved through—has also now contracted, with far less deals in special servicing, O’Connor noted. He said he’s been seeing more deals being resolved through note or auction sales or through fair value purchase options.

“There is a lot of that stuff, particularly with legacy notes. I think it’s going to be very interesting going forward. And I think most of the activity is taking place at the private equity or opportunity fund level,” he said.

Those funds are taking on what O’Connor referred to as the “hairy stuff” or higher yield debt , such as mezzanine loans, bridge loans and short-term positions “that we used to call loan to own trades,” he said.

There is “still a lot of capital on the ground chasing yield” O’Connor said, but the problem is what they are chasing, as everything may not be as rosy as it seems.

“You read the reports on the drops in delinquencies and it’s really not true,” O’Connor said. “You’ve got to ask the question: What are they measuring? Well, they’re measuring CMBS pools. So, if Ten-X or Mission Capital or one of the other players gets in the middle and sells off that note for special servicers, it’s not in the [CMBS] pool anymore,” he explained. “So, one day $150 million is suddenly gone. It’s not an accurate picture of what’s going on with those real estate assets. You’ve got to remember that.”