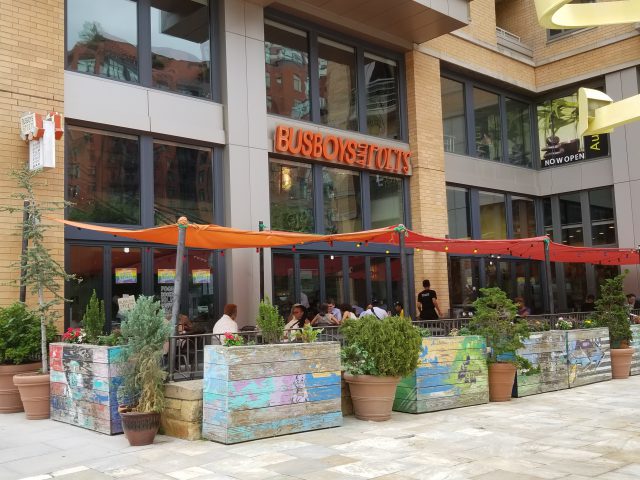 After 10 years at the corner of 5th and K Streets NW, Busboys and Poets is relocating its Mount Vernon Triangle location to 450 K Street NW.

Owner Andy Shallal told Commercial Observer that his landlord Edens wanted to raise the rent at his CityVista location—1025 5th Street NW—by 30 percent. He did not disclose the rent amount but said he negotiated it down to 12 percent, which was ultimately still too much of an increase for the restaurant to withstand. “I wanted to make sure we can be sustainable not only during good times but difficult times—there are bound to be some in the next 10 years,” Shallal said.

Shallal negotiated the new lease with Lester Schwalb, vice president at New York’s Ogden Cap Properties, which owns 450 K Street NW. “I think landlords can either be a partner or just a landlord and I see them as partners,” Shallal said.

“We are happy that Busboys and Poets is moving to 450 K—they are a wonderful part of the neighborhood and we’re glad they will continue to be in the heart of the Mount Vernon Triangle,” Schwalb told CO via email. He said negotiations were “smooth sailing” and gave kudos to his attorney Janis Schiff of Holland & Knight and Shallal’s attorney Stephen O’Brien.

Busboys’ Mount Vernon location is one of six in the D.C. metro area.

“It’s a great neighborhood,” Shallal said about his decision to stay in the community. “We were there from the beginning when Mount Vernon was just becoming more populated. It was just us and a Safeway basically, now there are 10 to 15 restaurants and lots of new buildings.”

The new space, which is 6,400 square feet and about 1,000 square feet smaller than the 5th & K location, was formerly occupied by L’Hommage Bistro Francais. The layout is “very different,” Shallal said, adding that it will have about 40 fewer seats (the current location seats 320 people). It will take $300,000 to transform the former French bakery into Busboys’ signature look inspired by African-American activists and social justice-themed artwork. Shallal said it will include a state-of-the-art sound and audio visual system for performances, two rooms for events and a large patio.

Shallal signed a 15-year lease that includes a five-year option. He would not disclose the asking price for rent.

He’s also expecting to open his seventh Busboys outpost in Anacostia by the end of the year. It will be the chain’s first location east of the Anacostia River. And he’s exploring the Skyland development in Southeast to open a location of his restaurant Eatonville.

The current Mount Vernon Triangle location is slated to close in September. The new location is expected to open the same month. Edens did not return CO’s request for comment.