Availability Rates Dropped or Were Flat During 1Q 2018 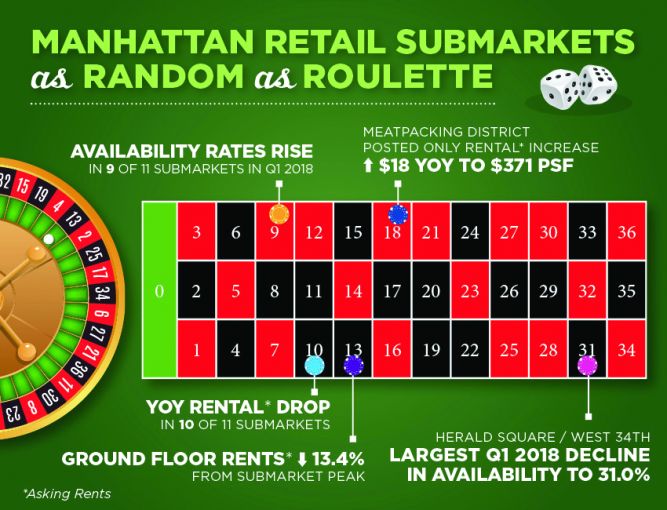 Asking rents in 11 submarkets are down an average of 13.4 percent. Richard Persichetti for Commercial Observer

As the annual ICSC (International Council of Shopping Centers) RECon rolls into Las Vegas once again, retail real estate professionals are apt to have just as much luck placing a bet on the roulette table as they are to predict where the New York City retail market is heading. I always seem to succeed betting on lucky black 13, which also was the number I wore on my hockey jersey back in the day.

Although Manhattan availability rate increases appear to have leveled off, ground-floor asking rents continue to dip. Availability rates dropped or were flat during the first quarter of 2018 compared with year-end 2017, in nine of the 11 statistical retail submarkets tracked by Cushman & Wakefield. Herald Square/West 34th Street posted the largest first-quarter decline, down 350 basis points to 31 percent, while Madison Avenue recorded the highest increase in availability, up 380 basis points to 26.7 percent.