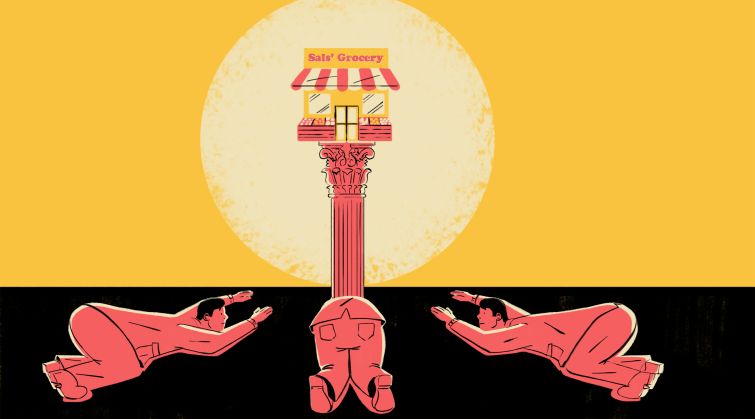 It’s more complicated than that, of course. People also need to wear clothes and wash their hair and buy mattresses, after all. But while grocers aren’t entirely immune to the trends buffeting the larger retail world, there are reasons to believe the sector’s brick-and-mortar business will prove resilient in years to come.

A key factor differentiating grocery from other retail is that people simply want to see what they’re having for dinner, said Allan Swaringen, the president and CEO of JLL Income Property Trust. Swaringen said that of his real estate investment trust’s roughly $2.6 billion in assets, more than $750 million is in grocery-anchored retail.

“We believe, like many others on the investor side for real estate, that those [grocery-anchored] properties have a resiliency, are e-commerce, Internet resistant,” said Michael Carroll, the CEO of ShopOne Centers REIT, which focuses on grocery-anchored retail. “If you are buying a blender, you know what that blender is, you don’t have to touch it, feel it, but that’s not the case with a lot of perishable items in a supermarket.”

ShopOne debuted in October 2017 and in November secured a $325 million senior credit facility (since increased to $400 million) from KeyBank Capital Markets, indicating optimism around the grocery-anchored segment even amid retail’s larger woes.

The move in recent years among grocers towards prepared and experiential offerings has also boosted the prospects of grocery-anchored properties, Swaringen noted, as they are driving more frequent traffic to these centers.

“If you look at traffic patterns, most people now go to the grocery store every other day,” he said. “They’ll buy today’s dinner, which might be something pre-prepared, and then they’ll buy something for tomorrow’s dinner. And then they’ll go back the next day.”

This level shopping frequency is essential to grocery’s appeal.

“I think the basic concept of a grocer with necessity retail close to your house is a shopping experience that is significantly different than the power center experience and the mall experience,” said Jeff Edison, the founder and CEO of grocery-anchored retail REIT Phillips Edison & Company. “It has a different set of retailers; it has different customer demand; and most of that, from our perspective, is driven by the fact that you go to the grocery store a couple of times a week.”

“That is the traffic driver, and while you’re doing that, you’ve got other things in your life that are part of your necessities,” he added. “Having those in that convenient place where you can do them all in one trip is part of the allure of this business. And that model has stayed pretty consistent for 25 years.”

This has turned out very differently from other forms of retail.

While the e-commerce market share in retail segments like electronics, clothing and furniture runs anywhere from 15 to 30 percent, she said, it’s around just 3 percent for grocery.

That number is growing, Franchot-Borok said. But, she noted, “we think that on a relative basis e-commerce poses less of a risk to grocery stores, the grocery industry and grocery-anchored real estate than to big-box real estate and power centers.”

Indeed, a Morningstar report from January suggests that while e-commerce is rapidly making inroads into the grocery space, the segment’s brick-and-mortar properties enjoy something of a symbiotic relationship with online sales. The report notes that online grocery saw a 24.4 percent jump in sales in 2016, the largest across the retail sector. Additionally, it observes that “the number of households in the U.S. that are using online channels to purchase food has increased about 4 percentage points since 2014, up to 23 percent in 2017.”

Grocery’s perceived strength is reflected in the availability of financing for the segment, said Marc Warren, a principal at Ackman-Ziff.

“There are really three types of retail that I would categorize,” he said. “You’ve got grocery anchored, you’ve got your big box and then your high street retail. And grocery remains the one that people want. A good grocery-and-goods center is attractive to lenders and investors, because they are perceived to be more predictable and less volatile than other assets.”

He cited several recent transactions his firm was involved in where the presence of a grocery anchor helped secure a deal that likely wouldn’t have been possible with another type of property.

“But in every instance, we were able to convince lenders that the tenants would stay,” he said. “We could tell the lender or investor that, yes, there are only three years left, but they are doing $500, $600 a foot, and that’s under a percent and a half cost to sales; and, if XYZ store doesn’t stay, ABC store is going to want to be in there.”

Warren said that given the struggles of the retail sector more broadly, some especially conservative lenders like life insurance firms are only interested in grocery-anchored properties.

“There are some life insurance companies that won’t do any non-food, non-grocery-anchored retail,” he said. “If you have a food anchor, it’s much easier [to get financing].”

That said, not all grocery stores are created equal. In fact, the sector is going through a shakeup that Jellinek projected will see traditional grocery store counts drop by around 25 percent by 2021. In recent years, traditional grocers including A&P and Marsh Supermarkets have gone out of business. Last month, Southeastern Grocers, which operates the Winn-Dixie and Bi-Lo grocery chains, filed for Chapter 11 bankruptcy.

According to the Morningstar report, traditional supermarkets’ share of the grocery market was 44.6 percent in 2016, down from 90 percent in 1988. Taking their place, the report notes, are, on the one hand, smaller more specialized stores like discount grocer Aldi’s or fresh format grocer Sprouts Farmers Market, and, on the other hand, large supercenters like Walmart, Costco, Sam’s Club, and Target.

As the Commercial Observer reported last year, non-traditional outfits like European specialty supermarket NetCost Market and German discount grocer Lidl are expanding their footprints, with the former looking to add some 30 to 40 new stores in the next five to seven years, and the latter having recently opened its first US stores in Virginia, North Carolina, and South Carolina.

“There’s been a big consolidation of the national brands,” Warren said. “You’ve had big ones go out of business or get bought, and that’s going to continue to happen.”

Carroll added, “There has been and continues to be market segmentation going on as it relates to the format of grocers going to market. There are high-end operators and price impact discount operators; there are ethnic operators, there is segmentation around natural foods, around more perishable-only type markets.”

“All of that comes out of traditional grocers’ [market share] generally,” he added. “So on the traditional grocer’s side, it really is survival of the fittest, and you really have to align yourself with people who have dominant share in a market and have a reasonable debt load on their balance sheet where they can continue to invest in their business.”

Edison said, however, that while his firm has a small percentage of its portfolio in non-traditional grocers, it still sees traditional grocery-anchored retail as the stronger bet, in part because it tends to draw more traffic than smaller, more targeted stores.

“Say, you have a 15,000-square-foot Trader Joe’s that is doing $1,000 a foot,” he said. “So they’re doing $15 million in sales there. Our traditional grocers are doing $30 [million] to $35 million in grocery sales. So just the traffic and the volume that they generate for the rest of our center, you can see that it’s just better for our other tenants.”

And, the Morningstar report notes, traditional grocers are moving to adapt to changing customer demands, including by investing in online ordering platforms and partnering with delivery services.

“It’s a razor-thin, competitive business,” said Ross Cooper, the president and CIO of REIT Kimco Realty, which owns just under 10 percent of the grocer Albertsons. “But historically it’s been a successful business for us and we think it will continue to be so.”

However, the rosy outlook only applies to the top tier of stores, Swaringen cautioned, noting that demographics are destiny.

“It’s all about being in more densely populated areas where the population density is increasing and where the household income is higher and increasing,” he said. “There are 40,000 [grocery-anchored shopping centers] in the United States, but there are only 10,000 that we are looking to buy. There are 30,000 that we are like, ‘those are not the winners.’ ”