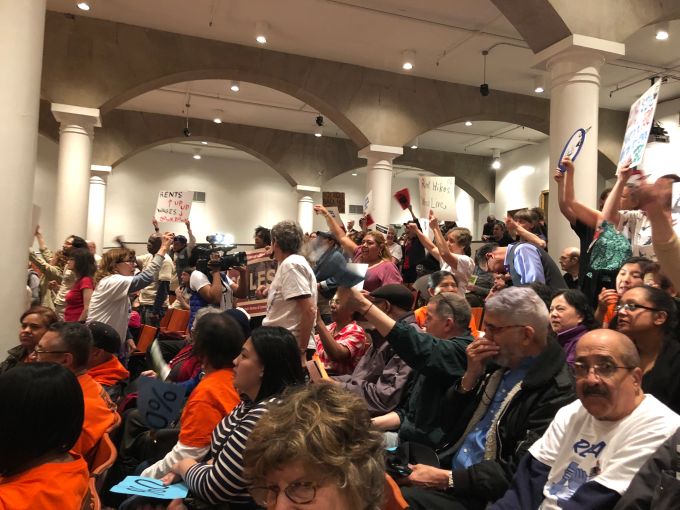 Protesters scream "Shame!" and "Shut it down!" as the Rent Guidelines Board voted down a possible rent freeze on Thursday night. Photo: Rebecca Baird-Remba/For Commercial Observer

Rent-stabilized tenants are going to pay a little more in rent this year.

In its first, preliminary vote of the season, the Rent Guidelines Board voted that New York City’s 1 million rent-stabilized tenants would see their rents go up by 0.75 to 1.75 percent for a one-year lease. Tenants who sign a two-year lease will be paying 1.75 to 3.75 percent more.

Thursday’s vote set a range of rents on which the Rent Guidelines Board can decide. The board will officially vote through the exact rent increases on June 26, and the new rent rules will affect leases signed between Oct. 1, 2018 and Sept. 30, 2019.

“Thirty percent of tenants living in rent-stabilized housing are paying over fifty percent of their income in rent,” said tenant board member Sheila Garcia. “We don’t want this to be another year where landlords see the money in their pocket increase when tenants overall in the city are in hardship…We want the business to be profitable for landlords, but not at the cost of tenants and mass displacement.”

The tenant members of the nine-person board, Garcia and Leah Goodridge, initially proposed raising rents for a one-year lease by 0 to 1.5 percent, but the rest of the board voted it down. When the vote failed, tenants and housing activists rose from their seats in the Great Hall at Cooper Union and began yelling, “Shut it down! Shut it down!” and rushing towards the stage where the board members sat. Even as activists yelled and tried to stall the meeting, the chair of the board raised a new motion for the slightly higher rent increases, which passed 5 to 4, with both landlord representatives and tenant representatives on the board voting against it.

Tenant activists had pushed for a rent freeze, while the Rent Stabilization Association, which represents 25,000 landlords of stabilized buildings, had advocated a four percent increase on one-year leases and a seven percent increase for two-year leases. Neither were particularly satisfied by Thursday’s outcome, which was too low for the landlords and too high for tenant advocates.

Last year, the rent board approved increases of 1.25 percent for one-year leases and 2 percent on two-year leases, ending a two-year-long rent freeze for stabilized apartments in New York City.