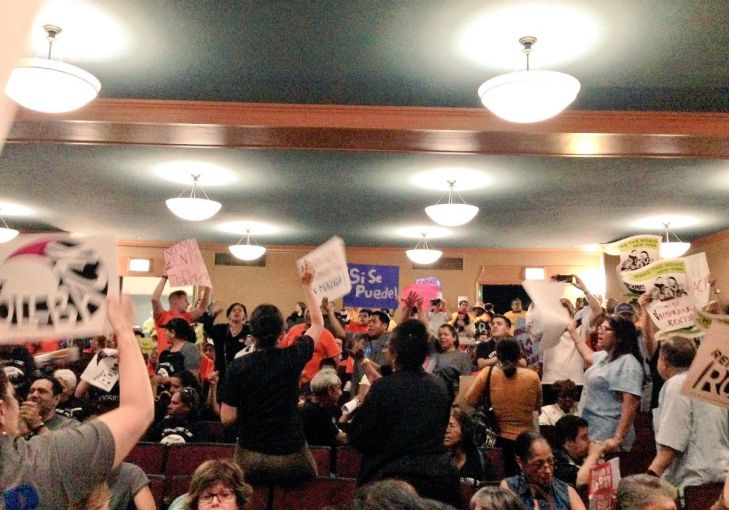 The New York City Rent Guidelines Board has officially ended a two-year rent-freeze by voting to increase rents for the city’s 1 million rent-stabilized apartments. In a move that frustrates both tenant advocates and landlords, the board approved increases of 1.25 percent on one-year leases and 2 percent on two-year leases.

The proposal passed last night seven to two, with representatives for building owners opposing it. Landlords will be allowed to hike rents on leases beginning anytime between Oct. 1, 2017 and Sept. 30, 2018.

The move comes on the heels of the board’s preliminary vote in April, when it recommended raising rents anywhere from 1 to 3 percent on one-year leases and 2 to 4 percent on two-year leases.

The rent bumps aren’t high enough for landlords, who argue that they aren’t adequate to cover the rising costs of operating buildings.

Jack Freund, the executive vice president of the Rent Stabilization Association, a landlord group, called the increases “totally inadequate” and said: “Real estate taxes keep going up, every other cost keeps going up, and we’ve seen barely a rent increase over the last four years now. And the net result is that the very tenants this board and the mayor are trying to protect are going to get hurt because property owners are not going to be able to pay for the economic lifeline for the city’s rental housing.”

RSA angled for 4 percent increases on one-year leases and 8 percent increases on two-year leases. That’s not far off from what the RGB determined in its own Price Index of Operating Costs, which was released in April and takes into account costs associated with running a multi-family building, including changes in property taxes, utility costs, the price of natural gas, insurance and labor costs. It found that the cost of operating a rental property in New York City increased 6.2 percent last year.

The nine-person board makes decisions based on its own research (like what it finds in its Price Index) and analysis of the New York City housing market. But both landlord and tenant advocates take issue with the way RGB calculates its operating cost numbers, as Commercial Observer reported earlier this month.

Tenants, who had campaigned for reducing rents, strongly opposed the board’s vote.

“The decision… is very dishonest and very unfair,” said Corinne Ombongo-Golden, a 38-year-old who fled the civil war in Congo 15 years ago and now lives in a rent-stabilized apartment in the Mount Hope section of the South Bronx. “Landlords are being rewarded to harass us more, displace us and use whatever weapon [they can] to destroy our community. The rent is already a burden, and now you want to add some more.”

Ombongo-Golden was one of more than 100 tenants who turned out to protest the vote, which was delayed by over an hour as security at Baruch College, where the meeting was held, let in six people at a time. While tenants waited for the meeting to begin, they held a limbo competition at the front of the room and chanted, “How low can you go?”

Harvey Epstein, one of the two tenant reps on the RGB and the director of the community development project at Urban Justice Center, argued that landlords had seen their incomes rise for 11 consecutive years. Owners’ costs have gone up 150 percent over the past 25 years, while stabilized rents have shot up 187 percent, he claimed. Over the same time period, New York City lost 250,000 stabilized units.

Landlords have implemented $1 billion in major capital improvement (MCI) increases over the past five years, according to Epstein, and those numbers aren’t included in the RGB’s price index.

“No small owners have said their costs exceed their income,” he proclaimed during the hearing. “If you really have a problem, open up your books,” he said, addressing landlords.

Hilary Botein, a public board member and professor at Baruch, said the state should consider altering the rent-stabilization laws to help struggling tenants. “In New York City, we have the Senior Citizen Rent Increase Exemption (SCRIE) and the Disability Rent Increase Exemption (DRIE) [also known as the NYC Rent Freeze programs],” she explained. “The state should create a similar program to help low-income rent stabilized tenants who pay more than 30 percent of their income in rent.”

She also argued that the state should eliminate rules that allow landlords to jack up the rent when they do MCIs and when an apartment becomes vacant (vacancy decontrol).

After two years of pushing for rent freezes, the mayor’s office touted the vote as a victory.

“We will never go back to the days when the landlord lobby got big rent hikes regardless of what the data said,” Melissa Grace, a spokeswoman for Mayor Bill de Blasio, said in a statement. “Taken together, the past four years have had the lowest guidelines in history—including the first two freezes ever—and a court ruling affirming the importance of tenant affordability in this equation.”