How an Artist Became a Retail Broker and a Meditation Teacher 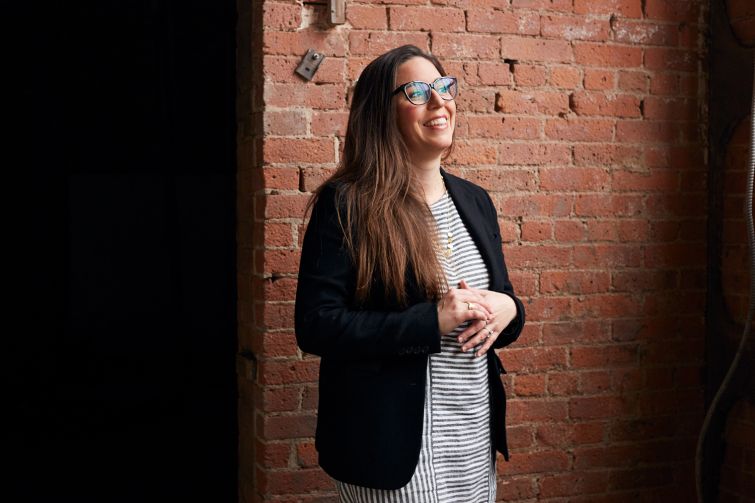 Jaime Schultz of Lee & Associates arrived in Williamsburg in 2001 and leases retail in some of the neighborhood's biggest developments. Photo: Yvonne Albinowski/For Commercial Observer

When Jaime Schultz moved to Williamsburg in 2001, the area had dozens of galleries and art studios. Fresh out of art school, she found herself in a growing community of artists who had begun flocking to vacant industrial spaces in North Brooklyn in the early 1980s.

But Williamsburg wouldn’t remain a freewheeling artist haven forever. By 2006, the city had rezoned the neighborhood, and the first crane arrived. Schultz, who had been working as a video installation artist and art handler, realized that she wouldn’t be able to afford to live there much longer.

“I can remember this very clear moment [where I thought] either I move to Bushwick because I’m getting priced out of this neighborhood, or I could get in the game,” the 40-year-old San Antonio native said. “So it was almost like self preservation and wanting to stay in this neighborhood. And at the same time like getting into the real estate world.”

She happened to live next door to Compass’ Christine Blackburn, who’s one of Williamsburg’s most prolific residential brokers. When Douglas Elliman opened a Williamsburg office, Blackburn urged her to go get a job there. So she got her start in real estate doing development site sales for Elliman in 2006.

“And then a light bulb clicked in my head and I said, ‘Well they’re building 30,000 units in this neighborhood, but we still don’t have a real supermarket. We don’t have a real pharmacy,’” she explained. “So I just switched gears and started doing retail.”

Schultz tried, unsuccessfully, to build a Brooklyn commercial office at Elliman. Then GFI Realty Services recruited her to launch a retail division with Lon Rubackin, who had spent more than a decade doing acquisitions and retail for Forest City Ratner.

During her five years at GFI, she carved out a niche as one of the go-to retail brokers in Williamsburg. Her first big assignment was leasing out 20,000 square feet of retail at the Finger Building, a 16-story rental building at 144 North 8th Street. DNA Footwear, Juice Press, Crossroads Trading and Beth Israel all moved into the development. Then in 2014 she became a managing director at Lee & Associates, where she currently handles 400,000 square feet of retail across Brooklyn and Queens. In keeping with her local ethos, she’s done recent deals with several local Brooklyn businesses, including Mekelburg’s, UVA Wines, Caracas and Toby’s Estate. And Greenpoint-based ice cream chain Van Leeuwen tapped her last year to oversee its expansion across New York City and the country.

Right now, Schultz leads the leasing team for 70,000 square feet of retail at 25 Kent Avenue, the half-million-square-foot office and industrial development under construction between North 12th and North 13th Streets. Restaurants, clothing stores and movie theaters are all in the running to move into the building, which is set to open in the fall. The property is unique because it offers light manufacturing space, and some tenants—think food businesses, breweries and artisans that make furniture and clothes—want to take ground-floor retail space and production space upstairs.

Schultz also oversees the retail portfolio for RedSky Capital’s Williamsburg properties, which include 237-247 Bedford Avenue (now home to the Apple Store, by Chloe and Sweetgreen), 143 Roebling Street and 92-112 North 6th Street (populated by an Urban Outfitters concept store and Vans).

Everyone who works with Schultz seems to agree that she genuinely believes in Williamsburg and its retail makeup, even as the neighborhood has transitioned from mom-and-pop businesses to high-end national chains.

Toby Moskovits of Heritage Equity Partners, who’s developing 25 Kent with Rubenstein Partners, described Schultz as “someone who cares deeply about Williamsburg. She’s a broker of tremendous integrity who really believes in the neighborhood and works with local and national tenants to help maintain the fabric of the community.”

Similarly, developer Peter Papamichael of Vorea Group said he hired Schultz a year and a half ago to find tenants for his planned retail-hotel-and-office development at 23-20 Jackson Avenue in Long Island City, Queens, based on the strength of her work in Brooklyn.

“What she was able to create there [in Williamsburg] is the main reason we hired her,” he said. “She helped the retail in Williamsburg explode.” He added, “I think she has a very good sense of what tenant needs are within retail settings. She knows who needs to be next to each other, what the foot traffic is like, and she understands the difference between different classes of tenants, national tenants versus mom-and-pop businesses.”

But her life isn’t all real estate. She’s also an active presence in the Rockaways, Queens, where she’s lived on a part-time basis since 2012 (The rest of the time she stays in a studio in Williamsburg). That summer, she began hosting dinner parties and meditation classes in her then rental in the Beach 90s. When Superstorm Sandy slammed into Rockaway in October 2012, residents on the peninsula woke up with no heat and no electricity. Schultz put her real estate business on hold and ran a relief center out of her house for two months. Each day, she’d wake up at dawn to go get Peter Pan donuts in Greenpoint, Brooklyn, drive to Rockaway, hand out canned food and supplies, and then return to her apartment in Williamsburg to sleep.

In 2013, she bought her home in Rockaway Beach, which she transformed into the Rockaway Retreat House. During the summer, she rents it out to travelers on the weekends, organizes yoga retreats, and hosts donation-based yoga and meditation classes on Sunday mornings. She also opens up the house for community meetings and events, and often hosts dinner parties on her large, wrap-around porch. The business goes hand-in-hand with her longtime passions—teaching meditation and cooking huge vegetarian dinners. (Her friends say her vegetarian lasagna is legendary.) Once she started teaching meditation and studying Buddhism a decade ago, yoga teachers began asking her to plan and cook vegetarian meals for their retreats in the Berkshires or the Hamptons. Her house in the Rockaways allows her to flex her culinary skills without driving for hours and schlepping pots, pans and food in her car to cook on-site.

Schultz also helped found a women’s business group in the Rockaways called the Ladies of Business Rockaway Beach. Several dozen female entrepreneurs, who run businesses ranging from wine bars to paddleboard rentals, meet once a month to network and discuss the challenges of turning a profit in seasonal community where few visitors come through during the winter months. The group hosts speakers from organizations like the Queens Economic Development Corporation, who help educate the business owners on city grants and tax breaks that are available to them. One member even won a $10,000 grant last year for submitting a business plan to the economic development corporation.

Riva Richmond, a journalist and chair of Ladies of Business who’s been friends with Schultz for four years, said the goal of the group was to “support each other and bring a feminine spirit of support and collaboration rather than competition. We’ve been able to foster a lot of partnerships.”

Moskovits said that she and Schultz are launching a similar women’s real estate networking event in June with the help of the Real Estate Board of New York. The CEO described it as “speed dating for mentorship. We’re going to have maybe 15 or 20 women with experience and they’re going to be available to chat, and then we’re going to do networking after that.” (A REBNY spokeswoman confirmed that they’re working on a women’s event with a tentative date in June.)

But real estate was destined to become a feature of Schultz’s life in the Rockaways, too. On the peninsula, the real estate market is so small that homes and commercial spaces often change hands without ever officially hitting the market. Schultz bought her home by befriending her neighbors and approaching one of them when she heard he was selling his house. Richmond, who closed on her house in the Beach 90s in mid-December 2017, said that Schultz helped her find her home using those same neighborhood connections.

“Jaime is kind of a central figure in the neighborhood,” Richmond explained. “Everybody knows Jaime. She’s got that local knowledge so a lot of people come to her.” She added that Schultz has gotten more involved in helping local retailers—particularly Ladies of Rockaway Business members—find brick-and-mortar space in the area.

Laura Nesci teaches yoga at the retreat house and met Schultz through the yoga and wellness world four years ago. She said the broker was “a huge part of why I ended up there. She was so welcoming. I stayed at the retreat house for a while. I attended workshops; I taught. She introduced me to the community.” Schultz also introduced her to her landlord and helped her find the apartment she rents now.

“Real estate and having the retreat house business are perfect for her,” Nesci said. “What she does is holding space, opening up space and connecting [people] to space. She’s a strong empowered woman, but she also has this healing space where she brings people together and encourages collaboration. She’s very special to be able to incorporate all these traits.”