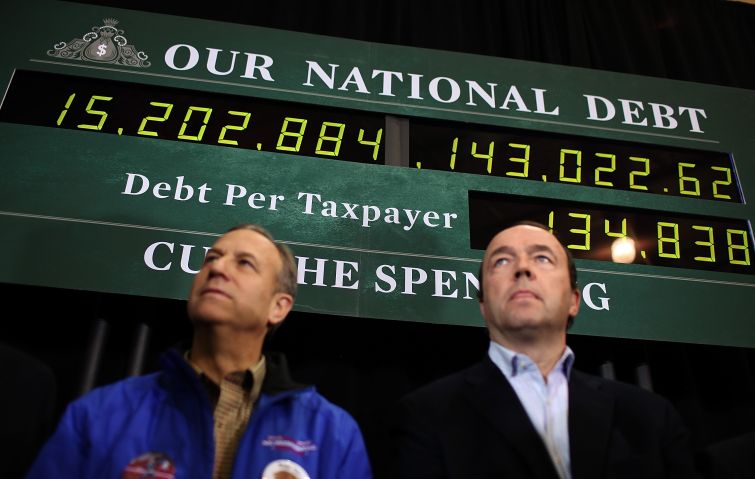 A display showing the national debt at a Republican campaign event in 2012. Since then, the party has reduced its emphasis on fiscal discipline. Photo: Justin Sullivan/Getty

A report this month from the Congressional Budget Office estimates that America’s publicly held federal government debt could exceed its gross domestic product in the next ten years, harrowing real estate borrowers about the prospect of permanently higher borrowing costs.

In all, the federal government now owes about $21 trillion, including both debt held by the public and obligations owned by the Federal Reserve and a handful of government agencies.

“All I worry about for real estate today is [interest] rates and government spending,” said Barry Sternlicht, the chairman of Starwood Capital. “Will it overwhelm an already tight labor market and drive rates up? I’m worried that between the tax cuts and the spending bill, [Congress] may have overdone this.”

Despite stronger than expected GDP growth over the last six months, steady increases in required spending on social programs like Social Security and Medicare in the next decade stand to create persistent deficits more severe than any since the end of World War II, the nonpartisan CBO reported. As a result, the Treasury Department will be forced to flood fixed-income markets with more public debt than ever before, creating a glut of cheap securities likely to discount bond prices and raise interest rates throughout the American economy.

“Rates that rise because the economy is strong: that’s one thing,” Sternlicht said. “But rates that are rising because of a lot of supply [of public debt] and a lack of buyers” is a far more troubling situation to the Starwood founder.

At a time when the Federal Reserve has already begun unwinding the monetary stimulus it enacted after the Great Recession, that scenario could presage a tidal shift for real estate financing, which has enjoyed remarkably inexpensive access to capital for much of the last decade.

“The outlook is definitely for rising deficits,” said EY’s Mark Grinis. “Does that mean that interest and borrowing costs will go up? Yes.”

The federal debt level has waxed and waned over the last half-century, with a tendency to retreat during growth cycles and balloon during and after recessions. (In hard times, Congress has typically authorized stimulus spending to imbue recovering economies with momentum.) But that trend fell by the wayside during the first decade of the 21st century, when publicly held debt rose gently during even a robust expansion. And never since the 1940s has federal debt shot up as sharply as it did after financial crisis ten years ago. Early in 2008, the amount of federal government owed others amounted to about 34 percent of GDP, but the proportion more than doubled to 74 percent by 2014.

If annual budget deficits continue to grow at the pace envisioned by today’s federal laws, the public debt could eclipse the entire U.S.’s annual economic output, a level that some experts consider portentous.

Federal debt reaching 100 percent of GDP would represent “a psychological barrier,” Ken McCarthy, an economist at Cushman & Wakefield, said. If the government fell that far behind on paying down the principal it owes, McCarthy explained, it would have to issue so much debt that bond shoppers would demand lower prices—which means higher interest rates—on new Treasury issues.

It also might lead investors to more urgently question the government’s commitment to paying its bills. Fitch Ratings, Moodys Investor Services and Kroll Bond Rating Agency have all granted the federal government their highest possible credit ratings, but Standard and Poor’s has been less sanguine, maintaining a AA+ on the U.S. since downgrading it from AAA in 2011.

Donald Trump fanned those flames as a presidential candidate with talk of a tactical U.S. government default—a statement he has since walked back—but spending on public retirement and healthcare programs could be a much deeper concern. Mandatory spending stands at about $2.5 trillion this year, but that figure will rise to $4.6 trillion in 2028, according to the CBO—a 76 percent increase.

Confronting those programs was once thought to be a priority of a Republican Party which now controls both houses of Congress, but that mission seemed mortally imperiled after a top Republican leader, Speaker of the House Paul Ryan, announced his retirement last week. Ryan had consistently touted fiscal responsibility during his 19-year career in the House of Representatives.

“Unfortunately, [entitlement reform] wasn’t a priority for a lot of other people in Congress,” James Comer, a Republican congressman from Kentucky, told The Washington Post. “You know, there’s only so much you can do.”

The politics of belt-tightening appear to render it unlikely that legislators will soon find an appetite to tackle the country’s spending challenges.

“In general, it’s hard to take something away from the American taxpayer,” said Heidi Learner, the chief economist at Savills Studley, stating a sentiment that could as well refer to mandatory spending as it could to temporary tax cuts enacted by Congress last December. The tax reform Congress passed in December permanently cut corporate taxes, but granted individual Americans only temporarily lower rates, set to revert to their higher previous levels after 2025.

“There will be a seven-year period when Americans will get used to lower marginal rates, and it’s going to be hard to someone to run on a platform of higher taxes” after that interval expires, Lerner predicted. “That’s not necessarily the most popular platform.

To be sure, not all signs point to intractably increasing interest rates.

In general, the Federal Reserve watches inflation closely, because the institution’s Congressional mandate calls for it to tighten the money supply, thereby targeting a higher interest rate, when the price level threatens to rise. But during the current expansion, an unprecedented level of global trade could be keeping inflation at bay, because firms can increasingly control costs by outsourcing production to cheaper markets. That shift could permanently slow price increases associated with economic growth, according to Grinis.

“With low employment, you’d think that wage inflation alone would [drive up the price level],” Grinis said. “Why is this different from a historical pattern? [In] the global supply chain, the production of goods is finding the lowest costs, so you’re having a bit of a deflationary effect.”

“You go back 25 years, we had nowhere near the amount of global trade that we have today. That’s a big part of it,” Grinis added.

But to the extent that uncertainty clouds the precise path of rising financing costs, an insistence on guarding against interest-rate risk could drive a wedge between real estate buyers and sellers.

With a forward-looking view about the cost of real estate capital, “[borrowers] would be hard-pressed not to gap out a cap rate on their pro forma [value expectation] when they’re exiting” ownership of an asset, Sternlich said. “Instead of a 5 percent return, they’ll sell at a 5.5 percent return—and maybe that wouldn’t be high enough” in an environment of more expensive financing.

That uncertainty could make every single investment less of a sure thing.