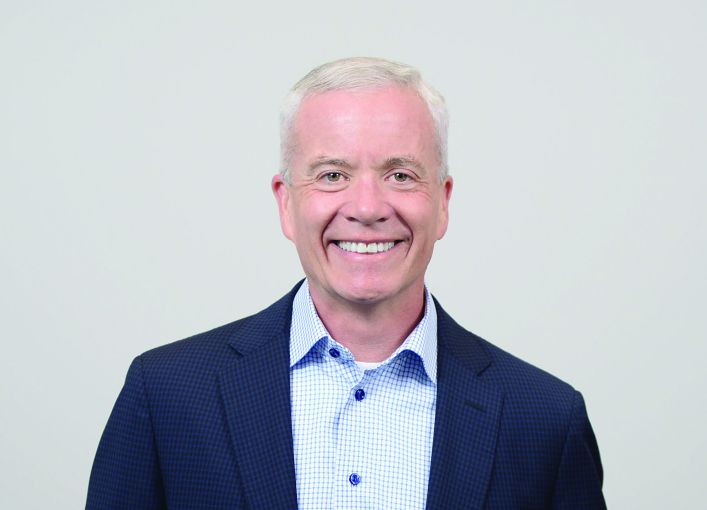 Flight attendants working the New York-to-San Francisco red-eyes might well be on first-name terms with Ed Forst, the New York City-based CEO of Silicon Valley startup RealtyShares who buckles in twice weekly for that 3,000-mile commute. The 57-year-old Goldman Sachs alum led Cushman & Wakefield for two years before the brokerage merged with DTZ in 2015, but was wooed by a more entrepreneurial vibe when RealtyShares, a crowdfunding platform, came looking for new leadership. Forst joined the board last year, becoming executive chairman in August 2017. Then he took on the CEO job in November after the firm’s founder, Nav Athwal, parted ways with the company.

Two simple buttons on RealtyShares’ website present visitors with the company’s range of services: “Get Financing” or “Start Investing.” The company solicits financing opportunities from small-market originators—most seeking under $50 million in debt—and grants accredited investors the chance to lend in increments of as little as $10,000. Since its founding in 2013, the firm has placed $700 million in capital over a total of 1,100 transactions—many of which, albeit, were fix-and-flip single-family residential deals in the early going. Still, with a renewed focused on commercial real estate lending, RealtyShares has pulled off deals in 39 states, taking funding from accredited investors in all 50.

Commercial Observer sat down with Forst last month in the Midtown East office he uses when he’s in New York, to check in with a startup that aims to change the face of small-market commercial real estate lending.

Commercial Observer: As CEO of Cushman & Wakefield, you were near the pinnacle of establishment commercial real estate. What enticed you about leading a startup?
Ed Forst: I think it’s important that we refresh and look forward. These legacy industries do amazing and tremendous work, but they tend to do it the same way they did it yesterday. The question is, how do you actually advance the business model? In the really big firms, it’s a challenge to change yourself and disrupt yourself. Sometimes you have to go outside to actually make that happen.

How did the RealtyShares opportunity come about?
I didn’t find this company. I was contacted by Athwal—he’s a West Coast guy. A deal guy to his heart. [Having started my career at Goldman Sachs], I wasn’t a real estate guy, and in some ways, being able to look at the industry with a fresh capital markets perspective, you can appreciate the information value inside of the company.

You mentioned that your time at C&W had started you thinking about the value of data in this industry.
If you appraise a trillion dollars a year in real estate, that’s a lot of information value. But really, at the end of the day, [the information is] locked. In this model, what we’re trying to attack is the lower [end of the] commercial middle market. If the upper end is pretty opaque, this is like, dark. You need night-vision goggles to even have a sense of what’s going on. That really appealed to me in a way.

Tell me a bit about the market you’re targeting.
By our calculations, about 90 percent by unit volume of all commercial real estate deals done last year was in the sub-$50 million space. And by dollar volume, it’s a quarter of a trillion dollars. That’s before you add in refinancings. Nobody today has come in and in any way professionalized that marketplace of intermediating capital flows. There’s a sponsor who tends to be local who finds a local opportunity and raises his or her capital locally, which says “ineffficient” [to me]. Deals get done, so we know the market exists. But we also know it’s a really inefficient system.

And precisely what crowd of investors are you pitching these opportunities to?
[We’re talking] about accredited investors. It’s important to distinguish the accredited community versus everybody who doesn’t meet that test of liquidity and sophistication and net worth, because I think they’re very different audiences. It may sound limiting, but there’s 11 million of them in the U.S. Is real estate direct investing for everybody? No, but I take 10 percent of [11 million] and that’s still a big number.

Do you think the market was just waiting for RealtyShares to come along, or do you have to pound the pavement selling it?
I’m going to have to say it’s a little bit of both. At the end of the day, we’re out there reaching people to spread the word to folks who wouldn’t have ever thought about [real estate]. When they come to our site, and they get registered with us, they can start to see deals. [Potential investors] read our investment memo, and they look at the drone photos, and they can dial in to a webinar we might have on the property which introduces the sponsor and access to the asset. They can look at it and have some questions that they can electronically distribute to us, or they can call and talk to a human if that’s their interest.

What’s that process like for investors?
[If you’re an investor,] you’ve got a million questions, you’ve got insecurities. I think it’s an overwhelming and threatening process, to learn about [a deal], if you’re living in Jacksonville [Fla.], that takes place in Nashville [Tenn.]. If you’ve had the hint of being a real estate investor, you’ve done it before very locally.

What’s your path to growing this firm into something really earth-shaking?
You’ve got to be a good listener. You pay attention to the questions you get from your investor base. Hopefully every succeeding underwriting we do is better than the one before. It’s an evolutionary process.

Over time, you can look at every capital market: it is far harder if you become established to go downmarket than it is to go upmarket. You anchor yourself with a certain cost structure and a certain way of doing business, and to move to the lower side of the market means you actually have to be a lot more efficient at what you do. So what we’re trying to do is really professionalize this lower middle market in every way for the sponsor and for the investor. We’re sort of the biggest at what we do, but we have a long way to go. What’s a fair market share [for us to expect]? Four percent? Five percent? There’s a lot of room for us to grow without having to go upmarket into the more competitive space.

When it comes to risk profiles or loan sizes, how broad is the menu you offer to investors?
Not as broad as we’re going to have it be. There’s a real education to the marketplace about risk adjusted returns, and we feel really good [about those returns]. Investors are learning the asset class, so convincing people that a 12 percent [interest rate] on this property is the right place to be, [versus] a 17 percent return on [a different] property, that’s still a work in progress as the market develops. We’ll get there. This is early days.

Is there any kind of dynamic market pricing at RealtyShares, or do you put different financing prices on different deals?
Today, the market is static. There’s an agreed offering with our sponsor. We put that out, and on a first-come, first-served basis that market is executed. We could think about a way where you start to build a book, [and] that day will come.

What’s the composition of your workforce?
We have a little bit under 100 [employees]. Roughly 30 percent are tech and engineering people. It’s an atmosphere like a trading floor. When you get to be on one floor without the office walls, it’s amazing the communication that happens. One might think, a startup in San Francisco, [our employees all come from those tech] companies that don’t use capital letters. [But we’ve got] people steeped in real estate, [which is] enhanced by the technology we deploy.

What’s your competition like in this space? Who are the other players?
There are some organizations in our space that call themselves platforms. They’re much more of a billboard matching service: sponsors pay a fee and wind up on the website, and then investors come look, make up their mind, and then there’s a match between the sponsor and the investor. Our model is much more, let’s go find sponsors that have great track records. Once we decide that’s a sponsor that we think is a really resilient, reputable sponsor, then we’ll evaluate the transaction at hand. We’re much more the special situation solution provider. [If] they need a second lien, some mezzanine capital, preferred or joint venture equity, we’ll be the people who come in and help them get the deal finished, and we’re increasingly providing more of that capital as our investor base grows. We curate these deals with incredible focus. We deal with all the investors for the life of the deal. We write corporate reports, we process the money, we do the [regulatory filings]. All of that stuff is done by us, so we’re there for the entire life cycle of the deal. That’s a very different model than posting a transaction.

Has it been easier to spread the word about RealtyShares to borrowers or to investors?
We’re trying to make it symmetrical. The world of mouth is contagious. There’s thousands of real estate sponsors who do business in [the] $50 million and under [segment]. We haven’t penetrated close to where we want to be. The more we’re able to do and talk about what we do, the more people will look at us and say, let’s give it a run. The sustainable franchise will really come from the repeat use. For so many businesses, the renewal is where the gravy starts to happen.

What role do data play in the real estate industry now? Is it evolving?
I think there’s a lot more talk than there is action. In legacy firms, private sector, it’s tough to liberate the information from all the different communities [where] it’s locked up. Parts of those firms look at that as their property, but it really is the firm[‘s property]. That friction can make it difficult. I wouldn’t say [RealtyShares is] frictionless, but we have a lot less of that, because everyone understands that that’s a fundamental tenet of what we’re trying to do.

Does blockchain have a promising future in streamlining real estate transactions?
Here’s the way I’d think about it. From us posting an opportunity to the investor finding the return on capital, let’s just say that’s a thousand steps. You have to model out the thousand steps. What are the first places you could say, “Let’s remove that inefficiency?” Some people say, let’s just get all those steps out of the way at once, but that’s not the way the real world works. But, I bet there’s a first five—there’s going to be five, where you say, “That makes a lot of sense [to put on the blockchain.] Let’s go with those things.”

What kind of customer service do you offer your sponsors?
We have a back end team that has significant experience in the post closing. We think that part’s important. And by the way, we get a lot of client feedback on how we can improve that kind of thing. If we’re going to do the whole [transaction], we’ve got to do the whole [transaction] really well, and it’s a lot to bite down and do.