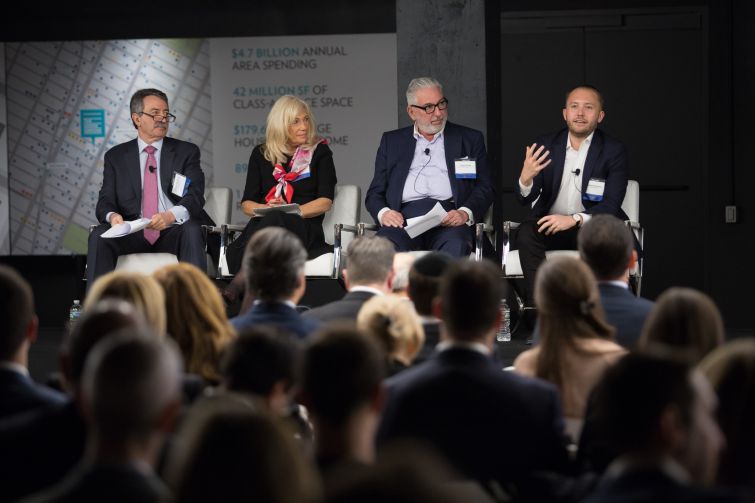 The message for retailers in 2018 is clear: get serious about survival because this market isn’t getting any less competitive. Whether it’s marketing, finding space, building out a brick-and-mortar store or running an e-commerce operation, retail businesses have to find new, innovative ways to integrate technology and draw in customers.

“The one unifying thing between all the retailers going into bankruptcy is that they haven’t adapted for the past quarter century,” said Jeffrey Roseman, a retail broker at Newmark Knight Frank, during Commercial Observer’s second-annual retail forum at Rockefeller Group’s 1221 Avenue of the Americas yesterday. He pointed out that if you went into a Toys “R” Us in recent years, it was a bad experience—dingy and poorly lit. Roseman spoke on the second panel of the day along with Equinox’s Jeffrey Weinhaus, Gensler’s Lauren Adams, Brookfield’s Michael Goldban, Storefront’s Arnaud Simeray and moderator Jaimee Nardiello of law firm Zetlin & De Chiara.

Retailers have to focus on drawing people into stores and creating an experience that makes them want to stick around and buy things.

“As a store you’re not competing with other stores, you’re competing with tickets to Hamilton or going to a bar,” Adams said. “They have to capture your leisure attention.”

She added, “Store design is no longer about products—rack ‘em and stack ‘em.” Retail spaces with effective design “are so immersive and you do end up buying things even though you maybe weren’t planning to. They have a [food and beverage] moment or a hospitality moment woven into them and you give [customers] a place to socialize.”

Goldban agreed, noting that the retail experience has to be compelling in order to get customers off their couches and into stores. “The lived experience becomes so much more important,” he said. “The customer has changed and what the customer wants has changed.”

Equinox, in some ways, was at the forefront of this way of thinking. The fitness chain was founded in 1991 with the aim of creating an upscale gym with a club-like ethos. Weinhaus, Equinox’s president and chief development officer, explained that the company has begun adding coworking spaces and lounges to Equinox locations, in addition to areas for specialized programming, like its new “precision running” treadmill classes.

“People used to be in and out [of the gym] in an hour,” he said. “Now people are staying and they won’t leave and you can’t get ‘em to leave.”

Shake Shack had the luck of opening in Madison Square Park in 2004, only a couple years before young customers began posting pictures of their meals on Instagram and Twitter. It was during the “initial phases of food photography being something everyone does,” McCaughan, the company’s vice president of development, said. “The way you connect with food was born in the mid-2000s and if you’re not [using social media to engage your customers] you’re behind the curve.” He also explained that younger customers want transparency in the way food is sourced and made, and they’re willing to pay a higher price for better quality food.

Meanwhile, landlords continue to struggling with lowering their retail rents and filling vacant spaces along expensive shopping streets in Manhattan. “It’s not just a price reduction,” Posniak said. “There have been additional concessions from landlords.” He added the decline of brick-and-mortar retail will mean “fewer stores but more impactful stores.”

Brokers like Podell claim that pop-up shops can be a boon to landlords by keeping vacant retail active, but Posniak argued that, “[pop-ups] do a half-assed installation. If you don’t do a full install, I’d rather have it dark.”