With a $50 million budget, Seritage is planning a big mixed-use project called Mark 302 on the landmarked, three-acre site 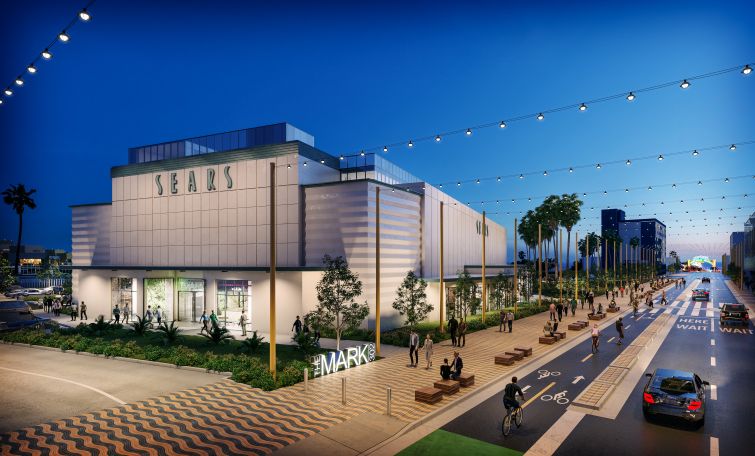 The Sears building in downtown Santa Monica, Calif., after upcoming redevelopment. The property is a landmark—designed by noted architect Rowland Crawford. Courtesy of Seritage Growth Properties 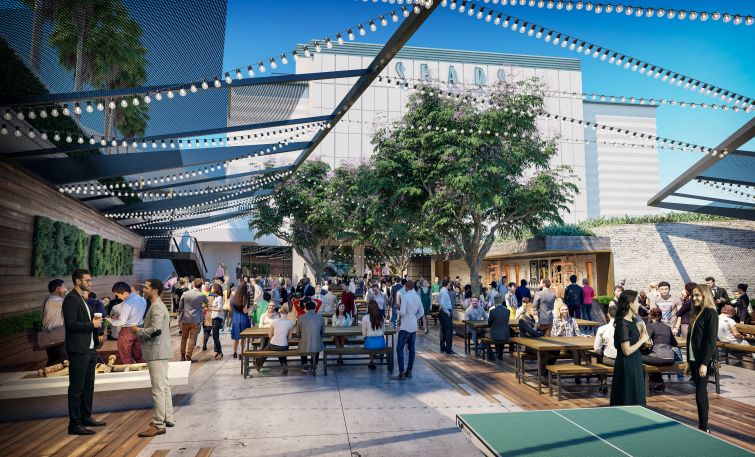 An office lobby, courtyard and Market Hall featuring a mix of 32 retail and food-and-beverage vendors will take up approximately 58,000 square feet of retail space at the ground and basement levels of the property. Courtesy of Seritage Growth Properties 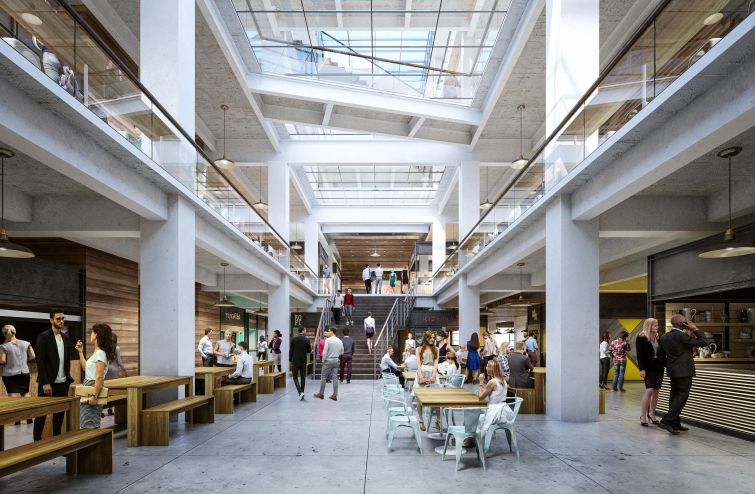 The lobby of the Sears building after redevelopment. Courtesy of Seritage Growth Properties 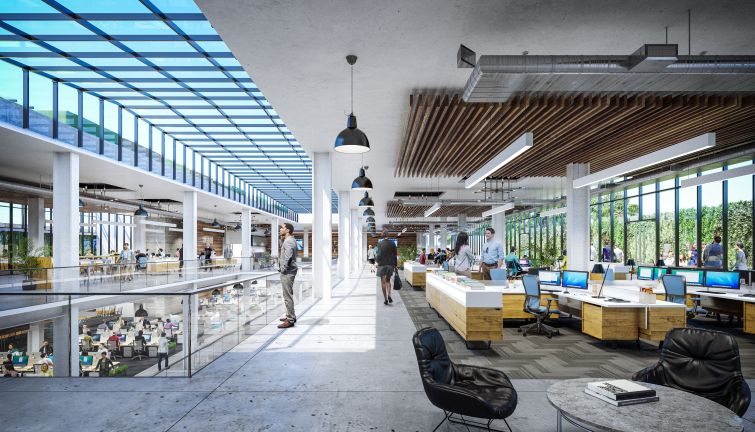 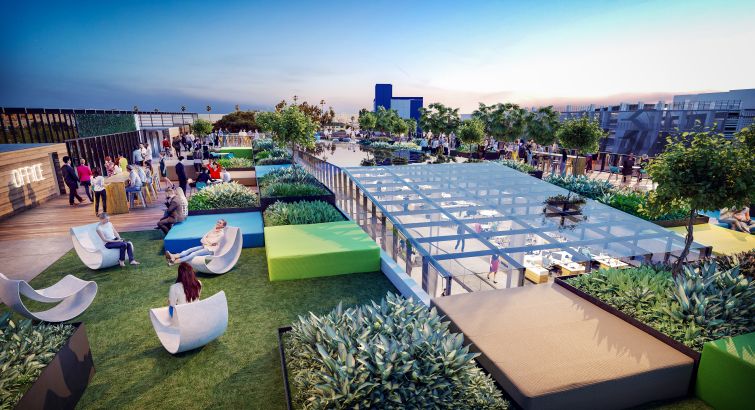 The roof will be restored as a landscaped and furnished outdoor deck with ocean views and will be a key amenity for tenants. Courtesy of Seritage Growth Properties 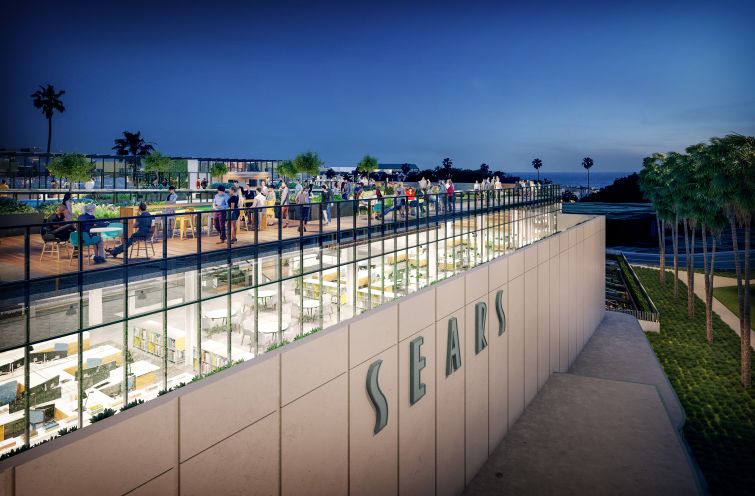 The mixed-use project is expected to break ground this month after clearing one final hurdle—a hearing and expected greenlight from the California Coastal Commission slated for March 8. Courtesy of Seritage Growth Properties
Previous Next

Kacy Keys has fond memories of visiting the Sears in downtown Santa Monica, Calif., recalling childhood trips to the department store with her grandmother in the 1970s. At that point, the retailer could rightly claim, as per its advertising at the time to be “Where America Shops,” but, of course, that didn’t remain the case. Declining sales forced the iconic American retailer to shutter 200 stores just last year.

Keys, who has spent much of her career on adaptive reuse projects, is hardly caught up in the past. (She was most notably the senior real estate representative in L.A. Mayor Richard Riordan’s Office of Economic Development, where she spearheaded the Adaptive Reuse Ordinance and major development projects in downtown L.A. and surrounding areas, including the Staples Center, Walt Disney Concert Hall and the Old Bank District.)

As senior vice president and head of the Western division of Seritage Growth Properties, the publicly traded real estate investment trust established by Sears in 2015 that owns 253 Sears and Kmart stores, she is charged with finding new uses for struggling properties. The three-acre, centrally located Sears in Santa Monica is one of three premier projects being reworked this year. (The company broke ground last November on the Esplanade at Aventura, an all-retail project in South Florida, which will replace the Sears at the Aventura Mall and is redeveloping another Sears property at the Westfield University Town Center in San Diego.)

For the Santa Monica location, a verifiable landmark—designed by noted architect Rowland Crawford in Late Moderne style—Seritage is working on keeping historic details of the store while bringing it into the modern age with an estimated $50 million budget.

The mixed-use project is expected to break ground this month after clearing one final hurdle—a hearing and expected greenlight from the California Coastal Commission slated for March 8—will preserve the historic exterior of the big-box store, while literally lightening it up.

Following the temporary removal of the roof, Los Angeles-based House & Robertson Architects, will cut holes in the floor plates in the middle of the building to allow the atrium’s natural light to reach clear down to the basement level. The removal and replacement of the roof is also part of the seismic retrofitting needed for the 70-year-old building.

A fourth story will be added by capturing attic space between the third floor and the roof that was previously used for storage. The roof will be restored as a landscaped and furnished outdoor deck with ocean views and will be a key amenity for tenants of the approximate 53,000 square feet of office space for rent on the top two floors. Keys predicts that a single tenant will occupy the space, and, given its location in Silicon Beach, will likely be a tech-driven or media-oriented client, though, “it could be a hedge fund for all we know, right? Keys said with a chuckle. True. Creative office is a growing demand in all sectors.

The architect is behind the revamp of other local notable properties, including the Petersen Automotive Museum on Museum Row, and the expansion of the historic Farmers Market in the Fairfax District.

An office lobby, courtyard and Market Hall featuring a mix of 32 retail and food-and-beverage vendors will take up approximately 58,000 square feet of retail space at the ground and basement levels of the property scheduled to be open in the fall of 2019. AVRO/KO is the design architect behind the Market Hall portion. Nabih Youssef Associates is the structural engineer.

Keys said the building’s rebranding as “Mark 302″ was to not only reflect its address at 302 Colorado Avenue, but also the Market Hall concept and its place as a destination moving forward.

While the Sears logo is still visible in official renderings of the property, whether it remains is yet to be determined and will depend on the tenant’s preference.

Despite being situated at the back of Macerich’s high-end outdoor mall Santa Monica Place and the retail-ladened Third Street Promenade, Keys said they didn’t fear oversaturation, especially given the influx of an estimated 60,000 daily riders at the terminus of the city’s expanded Metro Expo line, which now connects downtown Santa Monica to the Eastside clear to downtown Los Angeles. (As of last June, the Metro reached its 2030 ridership goal in just about a year, with an estimated 64,164 weekday riders.)

“We think we are in a unique location,” Keys said. “We see it as the tie that connects Santa Monica Place, the [Santa Monica] Pier and the Civic Center. We’re sitting right in the middle of that cross[roads] between all of those things. The pedestrian traffic and the location between the train and the pier is ideal and really lends itself to a multi-use project here.”