Small Is Beautiful: 77.6 Percent of Midtown South Deals Were Mini

The big deals get the glory, but the small deals are what really drive the office market accounting for the vast majority of leases 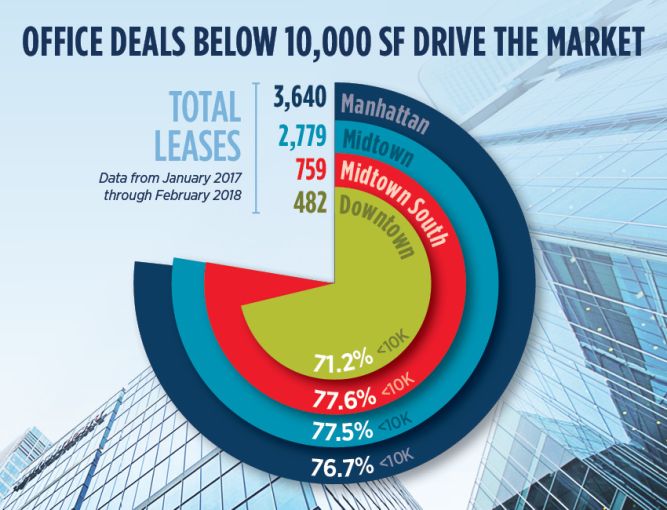 Large deals make headlines; I know I write about them myself, but leases greater than 50,000 square feet account for only 3.8 percent of the total 3,640 office deals completed in Manhattan since January 2017. Small deals are really what drive the office market, as 76.7 percent of Manhattan’s leases were less than 10,000 square feet. That number is actually up over the past 14 months, as the average from 2007 through 2016 was 76.4 percent. Let’s examine each major market in Manhattan and find out which one has the largest amount of small deals.

Downtown has the lowest total of small deals, coming in with 71.2 percent of its 482 leases below 10,000 square feet. Downtown led all markets with the highest percentage for deals greater than 50,000 square feet with 6.6 percent. Large tenants still flock to Downtown, as it remains a value-play with asking rents averaging 17.9 percent below Midtown and Midtown South pricing.

Midtown South edged out Midtown as the market with the highest percentage of deals smaller than 10,000 square feet, accounting for 77.6 percent of its 759 transactions completed. This is partially attributed to Midtown South having the lowest total inventory and its buildings predominantly comprising smaller floor plates. Also, this market attracts smaller startup TAMI (technology, advertising, media and information services) tenants, which have made Midtown South the hottest market in the U.S. It’s no surprise that leases larger than 50,000 square feet accounted for only 2.8 percent of the market’s activity over the last 14 months.