REITs Grapple to Stay Ahead of a Restless Office Market 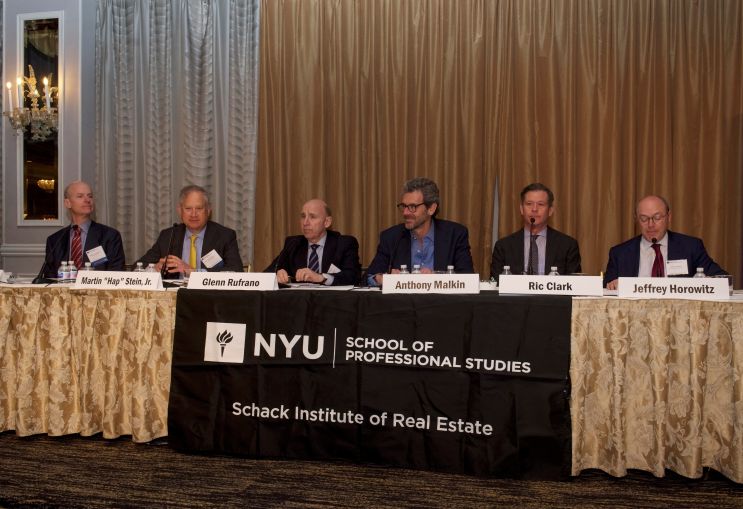 At a New York University-sponsored symposium dedicated to REITs at The Pierre hotel in Midtown today, executives from the industry’s most prominent publicly traded trusts pointed to earth-shaking technological and demographic shifts as the forces behind relentless pressure to keep up with changing demands for commercial space.

On a discussion panel moderated by Jeffrey Horowitz, Bank of America’s global head of real estate, commenters like Brookfield Property Partners’ Ric Clark and Empire State Realty Trust’s Anthony Malkin voiced unanimous accord that paying rapt attention to tidal changes in the industry would be a prerequisite for success.

“For years, we’ve gotten a bad rap for not being very innovative,” Clark said. “With the rise of millennials, tenants are paying a lot of attention” to digital amenities, like quality wifi and smart systems that promote energy efficiency.

That’s led to a frenzy of activity as landlords scramble to meet demanding tenants’ expectations for modern office space.

“There’s a bit of a nuclear arms race in New York of people renovating their buildings” to install those features, the Brookfield managing partner said. He declared he could name 40 major office buildings in Midtown, and 15 in Lower Manhattan, where owners had invested “massive amounts of capital” to update facilities for a millennial workforce.

As the packages of features lessees count on in office space evolves more and more quickly, REITs have confronted the need to dedicate ever more resources to staying ahead of the curve. Clark said that Brookfield has pulled together a small taskforce of workers assigned to advise senior management on important property-technology developments as they appear on the horizon. And it’s increasingly incumbent upon REIT managers to maintain balance sheets that are healthy enough to fund unforeseen technology investments at the drop of a hat, panelists agreed.

“We’ll want to adopt anything that will allow us to serve our customers better,” Boston Properties CEO Owen Thomas said. “There is a very healthy amount of capital invested in proptech, and I think some of these applications will be valuable.”

Even so, ensuring that big technology spends are worthwhile can take some trial and error. To that end, Malkin boasted of having one of the world’s biggest sandboxes to experiment in, explaining that his firm’s ownership of the Empire State Building provides stellar opportunities to examine how well technology investments scale in giant skyscrapers.

“The Empire State Building has the largest network in the world for its energy-management system,” Malkin said, describing Empire State’s efforts to get the most mileage out of each dollar it spends on electricity. The trust is working on a deal with Consolidated Edison that will allow it to place a seven-megawatt heat and power plant in the building’s basement. “We’re interested in making our kilowatt-hours as efficient as possible.”

Offices’ physical space is getting put through the efficiency wringer as well, panelists said, putting pressure on landlords to evaluate whether every square foot is being put to the most profitable use. Boston Properties’ Thomas cited research from JLL showing that co-working space had accounted for the absorption of more than 18 million square feet of office space in America since 2015, almost a third of the total pickup in usage during that time.

Co-working is “a disrupter, but it’s also a key demand driver,” Thomas said. “The one thing we’re watching now is [whether the trend] will migrate more into an enterprise business.”

It’s a question Empire State feels that landlords ignore at their peril. The firm has experimented with shared spaces in its own headquarters, Malkin said, as the company probes whether tweaking floorspace usage can boost productivity.

“We’ve put in 27 different meeting rooms [that accommodate] from two to 30 people,” Malkin recounted, and as workers have gained more elbow room to speak face to face, the number of internal emails employees send has dropped 55 percent.

By co-opting some of the strategies of pesky co-working giant WeWork, traditional landlords can also co-opt some of that firm’s growth, the Empire State chairman said.

“Start-up businesses can’t wait to get out of WeWork,” Malkin averred. “But [WeWork] has a lot of innovations that tenants and landlords are building into their spaces.”