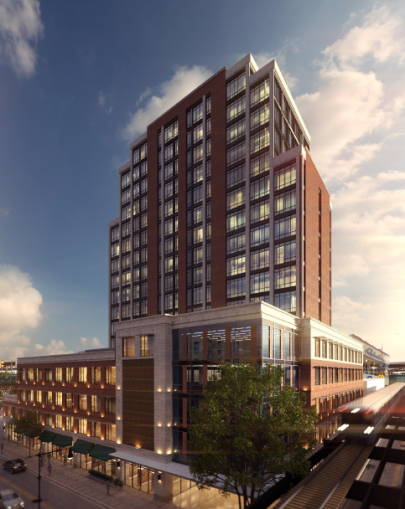 A rendering of the development at 3-50 St. Nicholas Avenue. Courtesy: Madison Realty Capital

The loan proceeds were utilized to buy out an existing partner–who MRC declined to name—pay off previous financing on the development site, fund the construction of the foundation for 3-50 Nicholas Avenue and acquire two adjacent buildings, located at 16-37 Woodbine Street and 54-31 Myrtle Avenue in Ridgewood, according to the lender.

A spokesman for MRC declined to elaborate on the financing, which the firm said  it closed in just seven days.

“This is a great example of our ability to rapidly evaluate and underwrite a deal with many moving parts, and we’re pleased to provide financing toward the development of a mixed-use retail, residential, and office project by an experienced, high-quality sponsor,” Josh Zegen, the managing principal of MRC, said in prepared remarks. “We believe the completed property will be unparalleled in its market.”

AB Capstone’s planned 17-story, 234,623-square-foot, mixed-use tower will be comprised of 129 residential units and will include 90,000 square feet of commercial space, 3,300 square feet of community facility space and 352 parking spaces. Once constructed, it will be the tallest building in Ridgewood and the neighboring Bushwick in Brooklyn, according to MRC.

Assemblage,” AB Capstone’s Meir Babaev said in prepared remarks. “The process was smooth despite the accelerated timeframe we required, and this financing enables us to move forward with our business plan.”

An official at AB Capstone was not immediately available for comment.