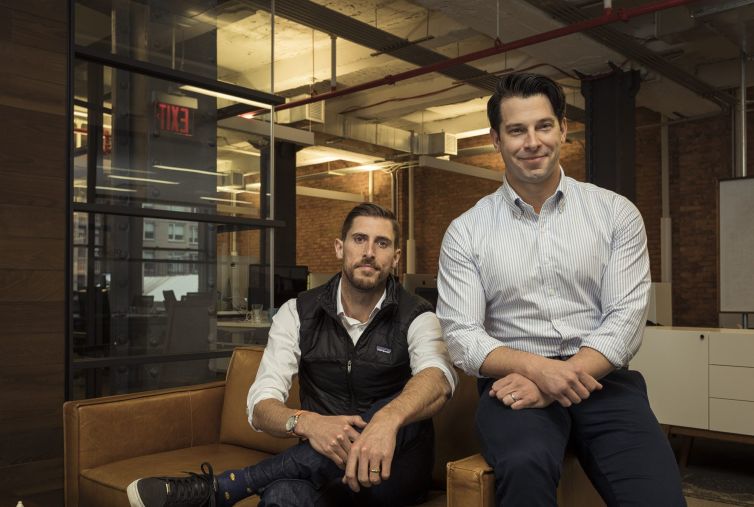 It was over a beer in the summer of 2016 that Nick Romito and Brandon Weber knew that they were meant to be together.

From there, the pair did a series of double dates—a brunch and two dinners—with their respective partners, and those meetings were just as positive.

It shouldn’t have worked: Romito and Weber had a rivalry going as strong as that of Coke and Pepsi, or the Red Sox and Yankees, or DC and Marvel.

Romito had founded VTS (formerly called View the Space), a leasing and asset management platform, in 2012. Weber’s Hightower came on the scene a year later doing a lot of the same stuff. But whatever bad feelings they might have had evaporated.

“We’re all like, ‘This is unbelievable how similar we all are,’ but even where we’re different, those are actually filling gaps that both companies have, so it was a super synergistic thing,” Romito said during an interview along with Weber at their offices last week. “We got along, the visions lined up, and we just said, ‘Alright, this is something worth further pursuing.’ ”

So Romito and Weber merged their commercial leasing and asset management platform startups in a $300 million all-stock deal on Nov. 29, 2016.

In the year since, the bromance has bloomed with Romito and Weber singing each other’s praises—a far cry from the premerger days when they were trying to one-up each other to win business.

As a combined commercial real estate tech platform, VTS has expanded its reach with more than 180 new clients last year (three quarters of which are landlords and one quarter of which is brokerages). The number of customers jumped by 87 percent to 28,000 in 28 countries, and VTS saw a 112 percent increase to 7 billion square feet (in over 49,000 buildings) in office, retail and industrial space managed on the platform. Office properties comprise 50 percent of the platform—retail makes up about 10 percent, and industrial constitutes the rest, according to Weber.

While the 200-person VTS has managed to grow in the year since the merger, the executives committed a lot of time to the integration of two very different work environments.

“[VTS had] a really, really strong sales organization [and] a strong methodology,” Weber said. “I think Hightower brought more seniority around the technology side.”

Zach Aarons, a co-founder and partner at real estate tech accelerator MetaProp NYC, said Romito and Weber “were dogmatically hyperfocused on integration in 2017.” That meant establishing a climate that would combine VTS’ old-school broker culture with Hightower’s more product-focused Silicon Valley ethos all while blending employees (and cutting 35 to 50 jobs, Romito said) and technologies.

The merging of the two companies has cleared the playing field, except for some competition from technology like Yardi’s Commercial Leasing Pad, billed as a mobile leasing and tenant support solution, and RealPage, which provides property management software solutions.

Meanwhile, it is not any one technology company or platform that presents the biggest hurdle for VTS in the marketplace.

“The No. 1 competitor factually is still Excel—it’s spreadsheets without a doubt,” Romito said.

Weber added, “When you’re talking about who we’re selling into—and we’re having conversations with landlords of all sizes, brokerages of all sizes—85 percent of the time still to this day…they just have nothing. So we’re taking them from this kind of really shitty world where they’ve got 1,000 spreadsheets, and a CEO asks a question, and it takes them two weeks to get the answer to the question. We’re their platform that they buy to better manage acquiring, converting and retaining their tenants.”

The commercial real estate world has long been considered slow to embrace new technology, but in recent years landlords, who make up the bulk of the VTS customer base, are investing their venture capital funds directly and indirectly into new real estate tech companies. Some are even developing their own in-house technology. VTS, for example got a big plug when real estate private equity funds managed by Blackstone invested $3.3 million in the company in January 2015.

A lot of landlords and office and retail brokers still don’t know what VTS is or don’t use it.

“We have an old (electronic) system that we created,” said Chris Conlon, COO of Acadia Realty Trust in an email. “We are reinventing it now. I have never found that canned software serves us effectively.”

Another landlord, who requested anonymity, said his “asset managers have a system that generates reports, and they have lease abstracts on file. The leasing team keeps up to date via Excel.”

A retail broker at a prominent firm said in an email, “Owners we deal with use it. Never had the patience to learn it.”

But then there was developer, mall owner and property manager Time Equities, which decided to sign on with VTS last May, putting 5.5 million square feet of retail space in the U.S. on the platform. The company, said Ami Ziff, the director of national retail at Time Equities, was “looking for transparency on our retail portfolio.”

Specifically, Ziff said, Time Equities “wanted to be able to understand at different points in time who are largest tenants are, who’s growing, who’s shrinking. You want when you are on the phone to pull up where else a tenant is. I’d have to remember or our broker would have to look it up. There’s human error and immediacy issues with that. For sales, it has a functional sales tracking interface so you can track, summarize, view, estimate and average different sales numbers.”

It also allows users to track “salient lease clause provisions,” Ziff said. For example, he said, “it’ll prompt you if you are going to lease a space that has a neighbor with a right of first refusal or a restriction against a certain use.”

Another notable company that signed on with VTS post-merger was Brookfield Property Partners, which put its North American office space on the VTS platform in the last quarter of 2017. That amounts to 84 million square feet of office space in the U.S., Canada, London (excluding Canary Wharf) and Dubai. Now Brookfield’s industrial group is looking at adapting the technology, Kevin Danehy, the global head of corporate development for Brookfield, said.

Brookfield had been looking for a “centralized database to manage our portfolio of tenants both at the local level and across the portfolio,” Danehy said. And the landlord wanted to automate its internal approval systems, which VTS does.

The merger between VTS and Hightower ended up being a boon for Brookfield as it faced the conundrum of which firm to select.

“We felt it was one plus one equals three when they combined,” Danehy said.

So far the younger Brookfield employees have been quicker to embrace the technology than the old guard, he said.

One feature that Brookfield hope VTS will build out is its customer relationship management system, or CRM. That is an area where VTS faces more competition from the likes of Apto, Salesforce and MRI.

“Apto is built just for brokers, so our software is focused entirely on streamlining their workflows so they can find new business and work their deals,” said Tanner McGraw, the founder and chief strategy officer for Apto. “Think CRM but without the hassle.”

Indiana shopping center owner and operator Regency Properties is relying on VTS to track the performance of its entire 6-million-square-foot retail portfolio since September 2016. Prior, the leasing team relied on anecdotal information, emails, status meetings and Microsoft Dynamics CRM to do their job. (The property management arm at Regency still uses the Microsoft software package.)

The first thing Dan Brandon, the director of leasing at Regency Properties, does when he gets into the office is pull up Microsoft Outlook and VTS. Those two applications remain on his two computer monitors all day.

VTS has saved the company time communicating within the organization and allows company executives to view a portfolio in real time.

VTS’ strength is on the supply side of the market with more than a dozen countries represented on the platform, Weber said, including one of Australia’s biggest landlords, AMP. It serves its clients from offices in New York, Boston, Chicago, San Francisco, Los Angeles, Dallas and London, and the U.K. is its fastest growing market, Romito noted. (Hightower and VTS both had London offices in the same WeWork space but on different floors.) VTS even lists property for the Crown Estate, which manages real estate that is passed from British monarch to monarch on accession.

Down the line, Romito and Weber hope to provide market analytics to their clients and establish a way for all parties in a deal to communicate via VTS.

“Today, you’re emailing each other for weeks at a time, actual Word documents. You are then going into VTS and putting in the information and figuring out what the actual numbers mean. Then, you go back into a Word document and put in your response, emailing it,” Romito said.

Weber added, “We’re a long ways down the road of modernizing the experience, the analytics, the tools that the landlord and the listing agent and the property manager have for their side of the business. We haven’t yet embarked on creating a really awesome experience for the tenant rep and the tenant side, so those two sides can connect in the VTS platform.”

MetaProp NYC’s Aarons anticipated this year VTS could expand into another asset type like multifamily (although he said, “That’d be a heavy technological lift”), buy a technology company or launch in Asia or other parts of Continental Europe.

Romito told CO that VTS has “no plans to go into multifamily this year,” but “in terms of acquisitions, M&A is a real part of our go-forward strategy, and we’re constantly looking at interesting products we could possibly deploy.” As for geography, he added, “We’re more focused on Continental Europe than we are on Asia at the moment. However, we do think there are significant opportunities in Asia in the future. Our focus continues to be on building our business in North America and the U.K.”

How about an initial public offering for VTS?

“There are a lot of variables you have to take into consideration when exploring the possibility of going public including market conditions, growth strategy, reporting transparency, etc.,” Romito said. “We’re probably a few years out from making that decision.”