With a strong economy and the dollar slipping, travel to the U.S. should be trending up. Some hospitality experts are pointing at the hotelier-in-chief for the industry's dark clouds 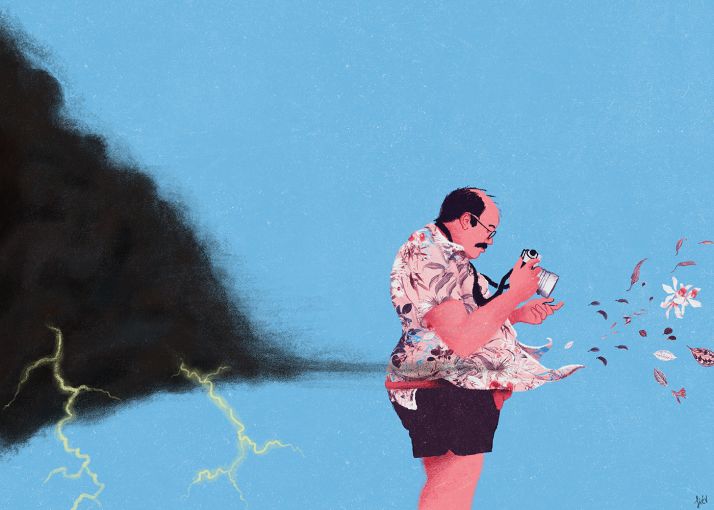 The United States economy is as robust as it’s been in decades.

The Bureau of Labor Statistics reported last week that the country added 200,000 jobs in January, which exceeded expectations and marked 88 straight months of job growth; the unemployment rate has remained steady at 4.1 percent for the last four months—its lowest level in 17 years; average hourly wages for private sector workers climbed 2.9 percent on the year—the strongest year-over-year shift since June 2009—and 0.2 percent from the previous month.

Historically, a strong economy has spurred strong travel and tourism numbers that boost the hospitality real estate sector—led by domestic travel and buoyed by international travel, which has been a mainstay export for the U.S. for years.

For the last two years, however, the trajectory of international travel has dipped significantly, and the U.S.’ current economic standing, coupled with its turbulent political environment, has some hospitality industry professionals and economists noticing some fractures that could negatively impact the sector.

“International tourism is definitely down,” said Chris Muoio, a senior quantitative strategist at Ten-X. “It’s affecting select, gateway markets disproportionately, and it’s really coming at a time when these markets have seen large expansions in supply. It’s not drastic right now, but it’s definitely having an effect.”

The U.S.’s total market share of long-haul travel fell to 11.9 percent last year, down from 12.9 percent in 2016 and from 13.6 percent in 2015, according to the U.S. Travel Association. The U.S. was joined only by Turkey—a country currently in political turmoil, having faced a military coup on July 15, 2016—as the only two countries out of the world’s top 12 destinations to have seen a significant drop in inbound international travel over the last two years—Turkey (6.7 percent) and the U.S. (6 percent). In comparison, Saudi Arabia saw its arrivals climb 20.3 percent from 2015 to 2017.

Nine of the U.S.’s top 10 source countries for international arrivals reported significant declines from 2015 to 2017—the only country whose travelers didn’t soften on the U.S. as a vacation destination was South Korea, which reported no change, according to data from the travel association. Had the U.S. maintained its market share of visitors, the hospitality sector would have had $32.3 billion in additional spending and 100,000 more jobs. In a separate report from the Commerce Department in early January, traveler spending fell 3.3 percent in 2017—through November 2017—equating to $4.6 billion in losses and 40,000 lost jobs.

“I think the damage is done,” Muoio said. “Even if the White House softens and changes its message, I think international travel sees right through it. As long as this administration is in place, I think there’s going to be a tepid, cooler response toward traveling to the U.S. It’s just become a less desirable destination based off the rhetoric and attitude that’s been put out there.”

Muoio added, “I don’t see tourism rebounding significantly unless [the U.S. dollar depreciates against other currencies]. It would honestly depend on whether [President Donald Trump] gets a second term. Four years of this attitude isn’t lasting, whereas a decade is more lasting. It’s definitely having a chilling effect on hospitality.”

Despite the losses in international travel, the hotel sector has remained steady for some time. Average daily room rates (ADR) have hit an all-time high—although it’s slowed considerably since 2014, according to data from research firm STR.

Revenue growth declined year-over-year in the first quarter of 2017 for the first time since 2010—although it was a small drop—caused by a slight dip in demand, stagnant occupancy levels and continued increases in hotel room supply across the U.S., according to an August 2017 report from Wells Fargo. Occupancy levels at a national level have been flat since 2014, hovering around 65 percent, and supply growth dipped, but the number of rooms still reached a record-high level in the second quarter of 2017, according to data from STR.

“In the last handful of months, we’ve signed up or executed on a few billion dollars in hotel deals,” said Dustin Stolly, the vice chair and co-head of Newmark Knight Frank’s debt and structured finance group for the New York tri-state region. “We’re seeing significant interest in financing hotel assets at all levels of the cycle, from fixed-rate assets that have stabilized cash flow to assets that have come out of renovations where lenders have gauged forward projections. Investors are definitely starting to look at hotels and be more active.”

In June 2017, STR reported it expected supply to outpace demand by 3 basis points on the year—3 to 2.7 percent—which could drive down room rates and create a cash flow issue should there be an economic downturn. Mike Barnello, the president and CEO of Bethesda, Maryland-based LaSalle Hotel Properties, told Commercial Real Estate Direct in June 2017, “When we get to this part of the cycle and we see the supply move up and continue to ramp and demand soften, that’s when we get more and more concerned.”

“Things are great right now, but back-to-back [down years for international travel] creates a concern that can be turned around,” said Chip Rogers, the CEO of the Asian American Hotel Owners Association. “We have a president who’s a hotelier. He could spread a message that America is open for business. International travel is the best and cleanest export that we have and creates and sustains many, many jobs in the U.S. If the message is the U.S. is the greatest place to visit, we would be very happy.”

That is exactly what Trump tried to say in front of a crowd of about 1,600 at the World Economic Forum in Davos, Switzerland, on Jan. 26, when he declared the U.S. is “open for business, and we are competitive once again,” touting the future of the U.S.’s energy and manufacturing exports. That assertion, however, doesn’t ring true in the hospitality sector.

Just a few days before the one-year anniversary of Trump’s inauguration, 10 business and trade associations—including the American Hotel and Lodging Association (AHLA), the Asian American Hotel Owners Association (AAHOA), the U.S. Travel Association as well as the U.S. Chamber of Commerce—created a travel industry group called the Visit U.S. Coalition that’s aimed at staving off and reversing the U.S.’s growing unpopularity as a tourist destination.

“We are certainly concerned about the statistics,” said Craig Kalkut, the vice president of government affairs at the AHLA, who added that his organization is also concerned about smaller hotels near national parks that could be affected by the loss of revenue from international travelers. “It’s important for the hotel industry but also the businesses that surround [and occupy] hotels and the economy overall, so it’s time to take some action. We want to head this off and turn things around as best we can. All these associations are nervous enough that they want to be involved. We want a more welcoming message for the world, and we want to turn things around.”

Some members of associations within the Visit U.S. Coalition acknowledged the negative impacts of certain policy initiatives and rhetoric from the Trump administration but also pointed to indicators such as the strong U.S. dollar as a main culprit for the downturn. The U.S. dollar is at its weakest point in almost two years, having fallen 0.07 points to 89.16 on the U.S. Dollar Currency Index as of Feb. 4—its lowest level since November 2014, after peaking from a high of 102.15 on March 3, 2017—although it still remains strong against foreign currencies.

“When we look at the last five to 10 years, international tourism has been a hockey puck,” said Patrick Denihan, a co-CEO of hotel developer Denihan Hospitality Group. “I would say that right now we have no concern [about the dip in international travel], but I do have a concern in the way the administration is dealing with immigration. Ten to 12 percent of our business is in the international market.”

Denihan added, “It would be nice if the current administration were taking a different position. How much stronger would it be? I don’t know. But, we always like to have more business if we can get it.”

The tight labor market, coupled with potential wage accelerations for hotel service employees—who are typically on the lower end of the wage scale—as well as potential tax hurdles for some markets, could also have an affect on operating costs.

“If the health of the labor market shifts and wages stagnate or contract, hotel fundamentals are the first to turn because of consumer spending,” Muoio said. “I would say the downside risks are bigger than the upside risks in terms of hotel operating. If there’s a downturn shock, this current supply overhang becomes a larger problem.”

Major indexes have taken a step back after getting off to a fast start to kick off the year, hinting that volatility has risen as strong wage figures have created some concerns about a pickup in inflation and a subsequent tightening of monetary policy. Outgoing Federal Reserve Chair Janet Yellen went so far as to question commercial real estate prices on CBS’ Sunday Morning in an interview recorded on Feb. 2, saying asset prices in general are “quite high relative to rents. Now, is that a bubble or is it too high? And there it’s very hard to tell. But it is a source of some concern that asset valuations are so high.”

It remains to be seen what could come of the hospitality sector, should an economic downturn swing into effect and domestic tourism take a hit, but one thing holds true: International tourism will not be there to help pick up the slack.

“We think this a great time to reverse this [downward travel] trend. For the first time ever, we have a hotel owner as a president,” Rogers said. “He has the largest platform of communication in the world with the ability to champion travel. He knows what it means to put more heads in beds.”