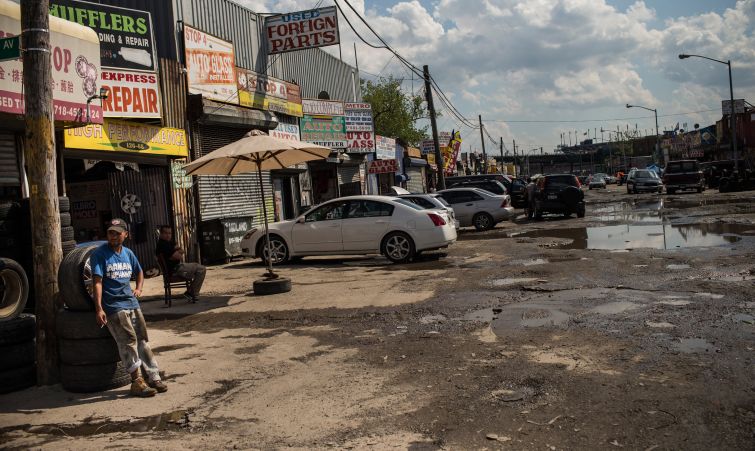 Mayor Bill de Blasio’s administration has hammered out a new deal to resurrect the long-planned redevelopment of the Willets Point area in Queens, sparking hope that hundreds of auto shops will eventually give way to housing.

Community groups and two developers, Related Companies and the Wilpon family, which also owns the Mets, have been fighting over the fate of the 23-acre industrial area next to Citi Field for years in state court. But the legal battle is finally over, and the two developers chosen by former Mayor Michael Bloomberg will build 1,100 affordable apartments, open space and retail on six acres at Willets Point Boulevard and Roosevelt Avenue, The New York Times reported this afternoon.

The de Blasio administration will create a task force with Queens Borough President Melinda Katz and local City Councilman Francisco Moya to decide on the fate of the remaining 17 acres of the site, which included 225 auto shops before the city began demolishing them a few years ago. So far, the city has spent $287 million buying land, acquiring it through eminent domain, removing toxic chemicals from the ground and relocating businesses, according to The Times.

It’s been a long road for the cluster of immigrant-owned auto shops, which is often called the Iron Triangle. In 2012, Related and the Wilpons’ Sterling Equities agreed to remove toxic materials from the site and build a mall with 200 stores, a theater and a hotel. They also pledged to build 2,500 apartments, including 875 for low- and moderate-income residents, but not until 2025.

The new version of the deal does not include the mall, which was slated to be built on parkland just west of Citi Field. The parkland was a piece of asphalt used for parking during Mets games, but it was still technically a city-owned piece of Flushing Meadows Park. Consequently, a State Court of Appeals ruled last June that the mall development would need approval from the legislature, which has to sign off on parkland being converted to new uses.