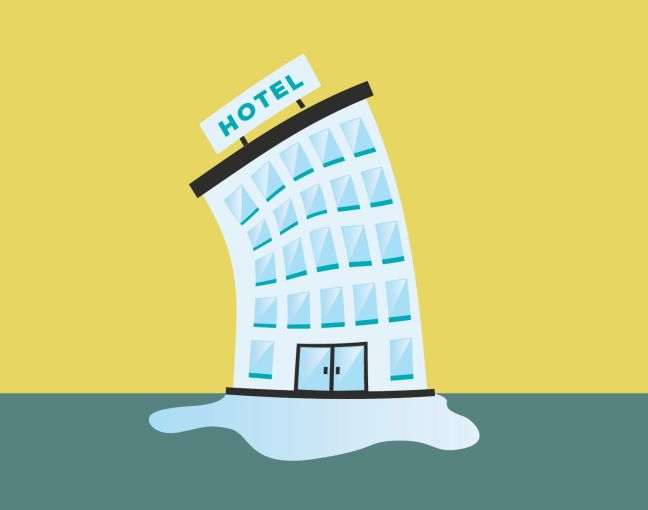 As the climate warms, ski resorts will have to contend with shorter seasons and less snow. Illustration: Kaitlyn Flannagan

As the specter of climate change threatens to shorten ski seasons and melt away winter sports profits, ski resort operators have found themselves on the ledge of an ungroomed double black diamond.

Signs of trouble for the industry are mounting. Of the 17 years since 2001, 16 have been among the 17 warmest in history. In particular, 2016 was the single warmest year ever recorded, and eight of its 12 months set temperature records.

The central Sierra Nevada, home to a cluster of ski resorts near Lake Tahoe, have seen about 2 percent less snow annually since 1930, according to government climate data. And since 1972, the average North American land area covered with snow each winter has declined by more than 2 million acres per year.

Insiders say the industry has been slow—perhaps willfully—to recognize the seriousness of the challenge. But ski resort owners, investors and lenders are starting to pay attention.

When Aspen Skiing Company, which owns four destination ski areas near Aspen, Colo., purchased Intrawest—an operator that ran resorts like Steamboat, Winter Park and Deer Valley—in 2017, the resorts’ future viability in the face of climate change was top of mind for the dealmakers. The same was true when Aspen’s holding company became an investor in Alterra Mountain Company, which owns the Lake Tahoe area’s Squaw Valley.

“For sure, the conversation around the valuation of these resorts involved a conversation about climate,” Auden Schendler, Aspen Skiing’s vice president of sustainability, said. “If Squaw [Valley] had four years of drought, what do you base your valuation on? Do you say, ‘Squaw is worth X…but don’t count the last four years of operating income?’ How do the valuations of the resorts change based on a new climate threat?”

“The science—not the politicized version—indicates that it has been affecting us for the past generation,” Wirth said. “The stark realities of climate change have confronted us in the western United States.”

Wirth was quick to point out that ski resorts are not unique among industries to feel the weight of an adversarial climate. Insurance companies that cover coastal cities in Florida have taken big hits during intense hurricane seasons of late, and California farmers were hobbled by a recent multiyear drought.

Even so, a peek under the hood of ski resort finances shows why their bottom lines may be especially vulnerable. As a private company, Aspen Skiing isn’t required to publish revenue figures. But recent results for two of the industry’s largest public companies, Colorado-based Vail Mountain Resorts and Peak Resorts, headquartered in Missouri, provide a glimpse of what’s at stake. (Spokespeople for both companies declined to comment.)

The Vail company’s investment in the industry is massive. The company owns 12 premier U.S. resorts in seven states, as well as Whistler Blackcomb in Whistler, British Columbia, and Perisher in the Snowy Mountains of New South Wales, Australia; it also owns eight mountainside hotels and manages or contracts with 14 others, totaling nearly 5,000 rooms.

Even with such extensive holdings, however, it’s difficult for the company to diversify its revenue away from a reliance on winter sports. Eighty percent of its income for fiscal year 2017 came during the winter quarters, indicating that despite the company’s efforts to branch out into summer recreation, it remains deeply dependent on healthy ski seasons.

Further, unlike other seasonal businesses—such as department stores that are mobbed with shoppers near Christmas—ski resorts find it especially challenging to adapt to slower periods.

Peak Resorts, a far smaller firm, owns about a dozen modest ski areas, such as New York’s Hunter Mountain and Mount Snow in Vermont. Its results show a similar vulnerability to a warming climate and the shorter winters it could bring.

In 2017, the firm brought in a total of about $75 million in ski-related revenue during a season that lasted no more than 166 days. Averaging its revenue over the full season, the company would stand to lose about $450,000 for each day it’s closed during the operational season.

In a push to mitigate dependency on winter revenue, many resorts have invested in summer entertainment to try to draw crowds in the offseason. When its mountains are bare of snow, Peak Resorts offers zip lines and mountain biking on its slopes, while Vail Mountain boasts hiking trails and alpine slides—downhill tracks on which thrill-seekers can race wheeled carts in warm weather.

Even Camelback, a small, privately owned resort in Pennsylvania’s Pocono Mountains with a meager 827-foot vertical rise, has invested heavily in year-round amenities. Since 1998 the mountain has been open in the summer as a waterpark, and its owners laid out $163 million in 2013 to build an additional indoor waterpark.

But if the most recent operating results for the public companies are any indication, summer revenues barely dent the income levels that ski resorts require to operate. In its 2017 fiscal year, Peak Resorts earned $58 million on lift and tubing tickets and another $8.5 million on ski instruction. In contrast, the resort pulled in less than $5 million on summer recreation. Vail Mountain made $996 million from skiing and instruction, compared with $172 million from other sources excluding dining.

Perhaps in a doubling-down on its dependence on skiing, Vail Mountain has also made remarkable investments into keeping its resorts viable should snowfall drastically decrease. Its answer: snowmaking, a process that forces massive amounts of water and pressurized air through a snow gun that blows the ersatz flakes across bare slopes. Near its Vail and Beaver Creek resorts, in Eagle County, Colo., Vail Mountain owns a controlling share in Eagle Park Reservoir. It also owns a minority stake in the Clinton Reservoir near its Keystone and Breckenridge resorts, presumably to ensure access to enough water to feed a growing appetite for man-made powder.

But Vail has been less outspoken than its privately owned peers when it comes to advocating for pro-climate government policies. Rob Cratz, the company’s CEO, found himself at the center of a snowstorm of his own creation last year when a Stanford University investigation found that the company’s political action committee had donated money to national politicians who deny that climate change is real.

“Frankly, I don’t know why Vail [Mountain] isn’t more vocal about the need for policy on climate change,” Aspen Skiing’s Schendler said. “Shareholders aren’t going to say, ‘I’m angry at you for bringing up the need.’ Instead, they’ll say, ‘Why aren’t you taking this seriously?’ ”

Aspen Skiing has been more proactive, “but there’s even more of a case for publicly traded companies to be aggressive,” Schendler added.

On the other hand, executives like Schendler and Cratz may have it easy: The situation looks far direr elsewhere in the country. Because of their high elevation—several Colorado resorts top out at over 13,000 feet above sea level—ski areas in the Rocky Mountains will likely be insulated from the most drastic reductions in snowfall.

In New England, where few mountains clear 4,500 feet, the sport may be far less viable as winters warm in coming decades. Daniel Scott, a professor who leads the climate change program at the University of Waterloo in Canada, used consensus global warming scenarios to predict how well New England resorts would fare as the climate warms.

The results were sobering.

If global emissions remain high, the number of ski areas in New England and New York that could count on enough snowfall to operate each winter could drop 60 percent by 2040, from 103 today to just 41. And the forecast predicts that things will get worse yet toward the early 2100s: If a fossil-fuel-intensive economy persists, the research suggests, only 30 New England resorts—mostly in Vermont, northern New Hampshire and Maine—will remain viable.

What’s more, the sport could become significantly less convenient for skiers in the Northeast’s largest population centers. Today, New Yorkers looking to hit the slopes for a day can easily make the 50-mile drive to ski areas like Mt. Peter in Warwick, N.Y., or a 90-mile trip to Tannersville, Pa., to visit Camelback. Scott’s work predicts that climate change could force mountains in those regions to close by 2070. After that, the Big Apple’s closest viable ski slope may be somewhere as remote as Mt. Snow in Somerset, Vt.—more than a four-hour drive from the city.

As a changing climate makes skiing untenable in most of New York, Connecticut, Rhode Island and Massachusetts, residents of cities like Boston and Buffalo, N.Y. will see their options diminish as well. Boston skiers could face two hours longer in a car than it currently takes them to get to good snow, whereas Buffalo skiers would need to drive almost 250 miles farther than they do today, adding nearly five hours to the trip.

“We’ve seen a fairly consistent pattern,” Scott said. “In record warm winters, usually skier visits are down 10 to 15 percent. They’re down further in small resorts. Already, you can see that people go to the places they know have the most advanced snowmaking.”

Protect Our Winters, or POW, a Boulder, Colo.-based advocacy group that was founded by professional snowboarder Jeremy Jones, has tried to raise awareness about climate change among ski resort executives and coordinate their response. But encouraging resorts to speak out about the risks to the industry has been challenging.

“[Climate change] is definitely something that impacts their bottom lines,” said Lindsay Bourgoine, who manages POW’s advocacy and campaigns. “But no resort wants to put up a big sign that says, ‘Hey, we have no snow.’ ”

The financial turbulence could jeopardize not only resorts themselves but also the small towns and villages that cater to tourists drawn to the slopes.

“We have concern for rural mountain economies,” Bourgoine said. “Resorts used to open on Thanksgiving, and Christmas used to the biggest week. As that changes, the trickle-down effect is real. It’s not just the ski resort but also the rental shops, the hotels and the restaurants.”

Those community ties only raise the pressure on the industry’s executives. According to Wirth, the Squaw Valley CEO, many of the ski industry top players have a personal stake in the preservation of alpine climates that goes beyond profit seeking.

“We’re mountain people,” he said. “We come from the mountains. There’s no doubt in my mind that that begets the conversations that we’re having now.”