Food Market Signs on at Lighthouse Point in Staten Island 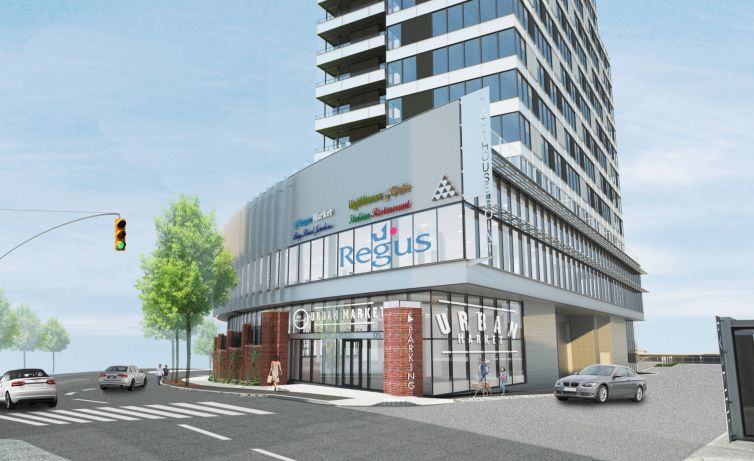 A rendering of Lighthouse Point Market and 35A Bay Street. The market will open later this year. Rendering: Cooper Carry/Garrison Architects

Lighthouse Point Market inked a 15-year lease for 7,000 square feet at the base of a 12-story, 116-unit residential building at 35A Bay Street, according to a press release from the developer. It will join Spaces, a coworking outfit owned by IWG Plc (formerly known as Regus), which signed on for 30,000 square feet of the building’s 65,000-square-foot commercial portion. The market will open in the fall of 2018 with a selection of produce and prepared foods. The operator, Sam Choi, also owns Cafe Manhattan, a grab-and-go food spot and buffet at 35 West 45th Street. A spokeswoman for the developer didn’t disclose the asking rent.

Phase 1 of the $250 million development includes the mixed-use building—where 20 percent of the units will rent for below-market rates—as well as an acre of public waterfront green space and a 300-space parking garage.

In the second phase of construction, Triangle will revamp 19th century Greek Revival buildings once used by the Coast Guard into 30,000 square feet of restaurant, office and entertainment space. A 12-story, 175-room Westin Hotel will rise next door and feature 15,000 square feet of banquet and meeting rooms. Work on Phase 1 is expected to wrap this summer, and construction on Phase 2 will start in the fall and finish in the spring of 2020.

Peter Botsaris of Botsaris Morris Realty Group represented Triangle Equities in the deal and did not immediately return a request for comment. The tenant did not have a broker.

The developer touted the fact that it was bringing a new grocery option to St. George, where the only major grocer is a Key Food a couple blocks away on Bay Street, near the border with Tompkinsville. While traditional grocery stores have been declining in some parts of New York City, as CO recently reported, areas like the North Shore of Staten Island are clamoring for fresh produce options because they’ve long struggled to attract quality supermarkets.

“As with all of our developments, it’s Triangle’s mission to deliver value for the communities in which it invests, and in St. George creating access to healthy food options in an underserved area is an aspect of accomplishing that goal,” said Lester Petracca, the president of Triangle Equities, in prepared remarks. “This urban market at Lighthouse Point will fill a void in the area, along with many other enhancements the project will bring to the North Shore of Staten Island.”