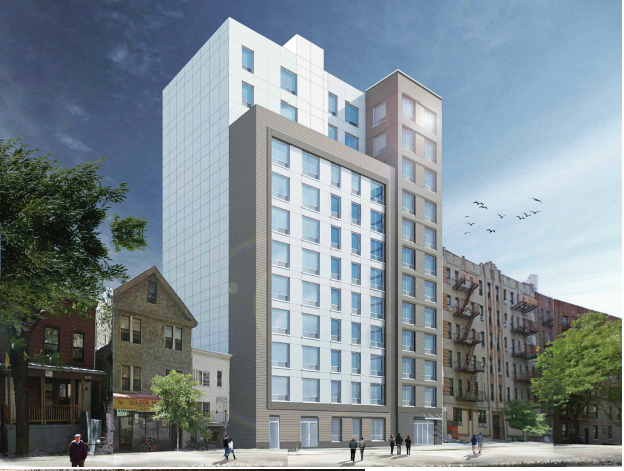 A rendering of The Grand. Photo: Thorobird Companies

A residential project in the Bronx, designed to house middle-class and low-income tenants, as well as people with addiction and mental-health problems, has received $65 million in public bonds to fund construction, according to an announcement from its developer, Thorobird Companies.

Known as The Grand, the project, which will comprise three buildings at 220 East 178th Street, 225 East 179th Street and 2189-2195 Morris Avenue in the Mount Hope neighborhood, will offer 138 apartments targeted to residents across the income spectrum. Although a suite of features including a furnished roof deck, solar electricity and a modish design concept recall market-rate developments elsewhere in the city, dozens of The Grand’s apartments will be dedicated to supportive housing, a program designed to reintegrate mentally ill or formerly homeless or imprisoned people into the mainstream housing stock.

To that end, the complex will sport round-the-clock onsite counseling and support from social workers and other therapists. That service will be administered by ACMH, a New York City-based non-profit that runs programs for transitional residents at several housing programs in the city.

The 40-year financing for the project—which consists of contributions from the New York State Housing Finance Agency and the New York City Department of Housing Preservation and Development, will help Thorobird create a more humane community for needy residents than currently exists in the city, according to Thomas Campbell, Thorobird’s founder.

In typical affordable housing projects, “housing is something you do to someone, not for someone,” Campbell said. “We believe in homes, and we want to humanize the experience for our residents, [allowing them] to live in a place built with them in mind.”

“We’re so far behind as a society in providing affordable housing,” he added.

The project was jump-started in part by a $250,000 capital injection from the office of the Bronx borough president, Ruben Diaz Jr. The grant, known as Resolution A funding after the city provision that allows for the discretionary outlay, was crucial for getting larger agencies on board, according to the developer.

“When you get started with a project, you need someone to step in first,” Campbell said.

Diaz described Campbell’s project as a model for integrated housing solutions in the city.

“This is construction with common sense and compassion,” Diaz said, praising the conceit to house some of the city’s neediest residents alongside working-class neighbors. “It’s important for us to have income diversity.”

Still, Diaz said, the funding process was flawed. The HFA pushed Thorobird around in the project’s planning stages, the borough president averred, requiring the developer to meet exacting specifications before providing the financing bond.

Freeman Klopott, a deputy commissioner in the state housing administration, resisted that narrative, noting that New York State received an application for funding in February 2017 and approved the bond in September, without unusual delay. An official at the New York City Department of Housing Preservation and Development, who requested anonymity, agreed that no delay had occurred.