In honor of the seven REBNY honorees of 2018, an analysis of seven submarkets seeing a drop in vacancy 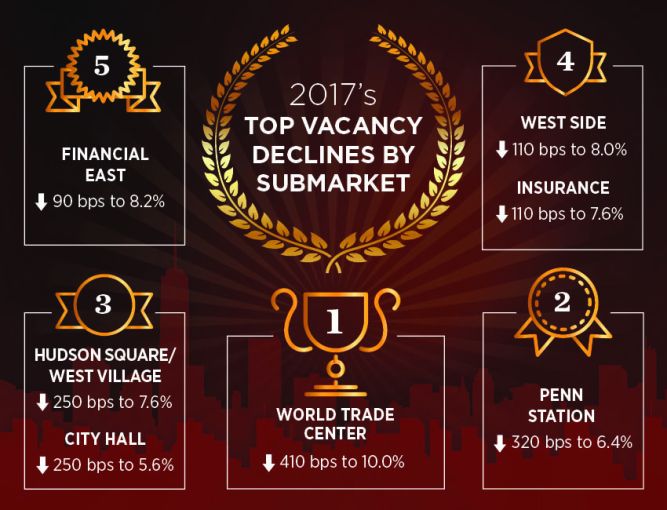 It’s that time of year again, when New York City brokerage professionals put on their black ties and glamorous gowns and celebrate at the 122nd annual REBNY banquet. I am certain the talk of the evening will be how the Manhattan overall vacancy rate dipped 40 basis points in 2017 to 8.9 percent, the lowest rate in six quarters. The drop in vacancy was attributed to 11 of the 20 submarkets posting vacancy declines year over year. In honor of this year’s seven REBNY honorees, let’s analyze the seven submarkets at the top of the descending vacancy rate trend.

Financial East – The first of four Downtown submarkets to make the list had a 90-basis-point drop to 8.2 percent in 2017. This submarket benefitted from a 55.6 percent increase in new leasing activity with nearly 2.2 million square feet leased.

Insurance and West Side – There was a tie for fourth place as these submarkets both had vacancy declines of 110 basis points, Insurance (a Downtown submarket for Cushman & Wakefield) to 7.6 percent and the West Side to 8 percent The NYC Department of Investigations’ 276,221-square-foot lease at 180 Maiden Lane fueled the drop in vacancy for Insurance, while three leases signed greater than 100,000 square feet helped the drop on the West Side.

World Trade Center – Downtown submarkets dominated 2017 as the World Trade Center submarket took the top spot with a 410-basis-point drop to 10 percent. This vacancy decrease was due to nearly 1.8 million square feet of new leasing activity, a 92.6 percent increase in 2017.