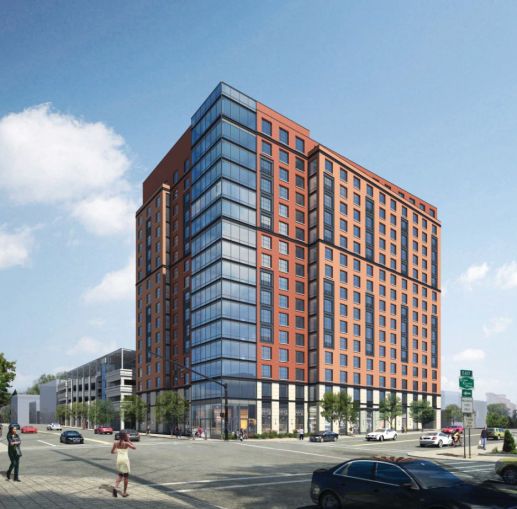 The financing was arranged by HFF’s David Giancola and Geoff Goldstein, both of whom did not immediately return a request for comment.

“I am thrilled to work on such a transformative project with such great partners and advisers whose collective efforts will enable us to deliver to the City of Mount Vernon one of the most amenitized and energy efficient rental properties in Westchester County,” Alexander Development Group Principal Mark Alexander said in prepared remarks.

The building was designed by global architecture firm Perkins Eastman, and the developers broke ground on the project last summer, according to a project fact sheet from Alexander Development Group.

When completed, the roughly 354,000-square-foot building—located in Fleetwood, a neighborhood of Mount Vernon—will be 16 stories tall and will include more than 16,000 square feet of amenity space, 12,000 square feet of ground-floor retail space and a four-story, 580-space parking garage connected to the building. The property will house studios and one-, two- and three-bedroom rentals.

The building’s amenities include a swimming pool, a fitness center, a courtyard, multiple roof decks, a library, a lounge, a package room and a concierge.

Alexander Development Group has experience in the Fleetwood, having developed a Class-A rental community in the area called The Horizon at Fleetwood, located at 550 Locust Street in 2011. The building has 101 rental units, according to Rent.com.

Officials at The Bluestone Organization could not immediately be reached for comment.