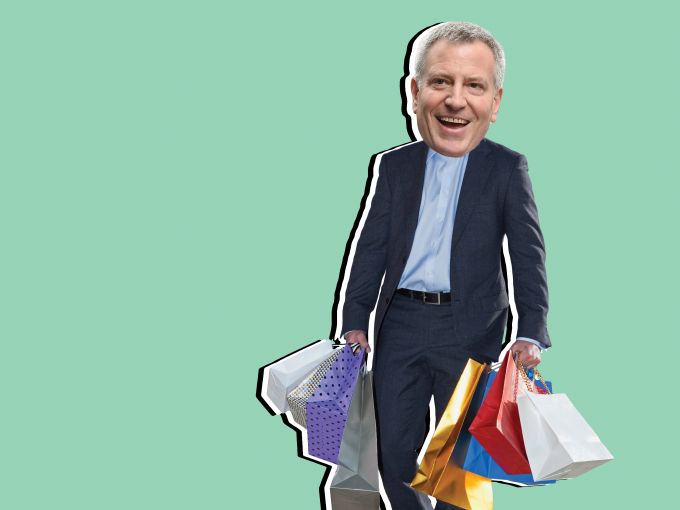 Vacant storefronts have become a persistent Manhattan eyesore in recent years, as ever more window dressings and restaurant menus have given way to “for rent” signs. Blame sky-high rents, a shift away from brick-and-mortar shopping habits or decades-long leases with locked-in rents that leave landlords desperate to secure top-dollar deals today: All contribute to a veritable minefield for mom-and-pop businesses.

However, small-business owners have a shot in the arm coming their way this July when a years-long legislative effort to lower their costs is set to reach the finish line: A revenue-code reform will ease the commercial rent tax, a consistent fly in the soup of a broad cohort of prime Manhattan tenants.

Now, City Council Intro 799-B, legislation inked by Mayor Bill de Blasio in December 2017, promises relief, at least to firms at the lower end of the current bracket. The bill raises the minimum rent threshold to $500,000 for fiscal year 2019, a change the mayor’s office said will entirely eliminate the tax for 1,800 small businesses in the city and significantly reduce the outlay for 900 more.

The measure, championed by a city councilmember who has since left office, Dan Garodnick, has won broad political and business-community support. The Manhattan Chamber of Commerce and the Real Estate Board of New York each issued a ringing endorsement of the move, as did a grab bag of lawmakers ranging from incoming City Council Speaker Corey Johnson to his predecessor, Melissa Mark-Viverito, as well as Jerrold Nadler, who represents much of Manhattan and Brooklyn in the House of Representatives.

“With these reforms to the commercial rent tax, the New York City Council is helping breathe new life into local businesses and increase jobs,” Johnson said in an email to Commercial Observer. Johnson’s constituent territory, District 3, encompasses west Soho and Greenwich Village, neighborhoods that have prominently suffered from the blight of higher vacancies.

None were more eager to celebrate the legislation’s passage than Garodnick, however, whose victory in shepherding the legislation to de Blasio’s desk at the 11th hour before his term-limit mandated departure last month represented something of a victory lap for the longtime councilmember from Manhattan’s East Side.

“We have a tax here that has the effect of throwing cold water on local economic activity,” said Garodnick, who has lain low since leaving office to spend more time with his family. “We needed to find ways for the city to stop stepping on the necks of small businesses, and this was one.”

Praise for the measure has rained down from industry players as well.

“I think that this is a definite benefit for a sweet spot of people that have smaller and midsize businesses,” said Tom Corrie, the director of accounting firm Friedman LLP’s state and local tax group. “[Those businesses] provide a lot of employment.”

A persistent problem with the tax, several insiders said, had been that a fair number of commercial renters did not even realize they were responsible for it when they signed their leases—although that problem may not alleviate with the new reform.

“Many tenants are not aware when they calculate their costs that there is a requirement to pay commercial rent tax,” Robin Abrams, the vice chairman of Eastern Consolidated’s retail brokerage, said via email. “They often are not represented by brokers who might educate them about this expense and are likely not knowledgeable about these kinds of additional expenses. [Then], they are hit with these costs once committed to the space.”

“I just completed an audit where I had a longtime family business that would have fallen within the context of this new change,” Corrie said. “Unfortunately, their previous accounting firm did not advise them correctly. Now, they got caught for an eight-year audit, which cost them a lot of money.”

By removing the tax burden on the smallest businesses it had applied to, Corrie said, the new measure will decrease the likelihood of mistakes by unsophisticated companies.

The accountant also lamented that the rent tax’s incidence falls on a group he sees as an economic engine in the city.

“These folks are not getting wealthy. They’re providing employment for 20 or 30 individuals each,” Corrie said of small business owners.

That logic mirrors the de Blasio administration’s thinking on the subject. Small businesses employ millions of New Yorkers, and nearly half of the companies are owned by immigrants, a spokeswoman for the city’s Small Business Services department said in an email to explain the administration’s emphasis on supporting the sector. Responding to questions about the overall business climate, the spokeswoman pointed out that in addition to the new tax break, the city has tried to lessen the regulatory burden on firms.

Total fines assessed against small businesses have declined 40 percent since 2014, she said, adding that the de Blasio administration has held thousands of free consultations with enterprises to help them avoid incurring costly violations.

Indeed, the reduced tax burden could help promote a more transparent relationship between businesses and the city because businesses sometimes cheated to avoid the rent tax. Some conniving tenants who were aware of the tax had dreamed up inventive schemes to avoid paying up, brokers said.

“We had one guy who asked if we could write him a separate lease, [each] for his store and his basement,” said Rafe Evans of brokerage Walker Malloy & Company, explaining that splitting the space into two separate contracts would have been a dubiously legal end run around paying a commercial rent tax bill. “That was a few years back, and we declined to get involved in shenanigans like that.”

“Tenants don’t want to know [about a tax violation],” the broker added. “There’s some willful blindness.”

Of course, the most seething ire against the tax comes from tenants themselves.

“I think it’s insane,” said Brian Kelly, a client of Evans who leases space for the Japanese restaurant, Kobeyaki, he owns on the Upper East Side. (Kelly declined to name his restaurant for this article.) “Taxing people on paying high rents. It seems kind of crazy to me.”

When Kelly signed a lease on East 86th Street in 2014, Evans said, the rent was in the mid-$20,000s, putting the restaurant squarely in the category of businesses that see their rent tax entirely disappear under 799-B.

“It’s a very big deal,” Kelly said. “I’m very happy they decided to do away with [the tax]. It’s one tiny step by the city of New York to become a friendlier place to do business.”

“We had been looking to get outside the city,” Kelly added.

Between relentless rising rents and mounting transit headaches, looking outside the Big Apple for growth has become an increasingly tempting proposition for businesses and developers of late. With decidedly positive harbingers for the city’s business climate harder to come by, many stakeholders seemed downright bemused by how broadly palatable the tax cut has been.

Indeed, conversations with landlords, politicians, special interest groups and business owners failed to uncover a single constituency that looked askance at the development.

At worst, at least one broker was merely indifferent.

“I don’t think [the commercial rent tax] has an impact on anybody anymore,” said Stephen Siegel, the chairman of global brokerage at CBRE. “It’s all part of the expense package. When we do a financial analysis, everything is considered, and as far as the tenant is concerned, if anything is a problem, it’s rising rents.”

“I don’t even think people think about [the commercial rent tax],” he added. (Siegel has personally invested in a number of New York City restaurants, including Sarabeth’s, the Knickerbocker Bar & Grill and P.J. Clarke’s.)

Even if that’s the case, with the city’s climate for small businesses under increased scrutiny from politicians and other commenters, it’s perhaps unsurprising that a deep coalition of politicians was moved to act.

Sal Albanese, who challenged de Blasio in the Democratic mayoral primary last year, emphasized his support of the Small Business Jobs Survival Act during his campaign, a measure that would force landlords to sign more tenant-friendly leases. Although that bill would lead to deeper structural reforms for business owners than the rent-tax change, the current cut represents a broad group of politicians’ acknowledgement of small firms’ struggles to stay in Manhattan.

And Jeremiah Moss, a writer who for years has chronicled small-business closures in Manhattan on a popular but melancholy blog, has argued prominently that city policies are stacked against the beloved restaurants and stores whose shutterings he bemoans. His 2017 book on the subject, Vanishing New York, was widely reviewed in local and national outlets.

But Siegel, for his part, argued that any concerns about small-business viability in New York are decidedly overblown.

“I think there’s a good climate for anything in Manhattan,” Siegel said. “There’s not better labor anywhere in the country, and more and more people want to live in urban areas.

“Is it more expensive than Podunk, Iowa? True,” he added. “But [for people who are] looking to grow their businesses—the access in New York City to people and banking—there’s no better place in the world.”