On the Home Front: The Mayor and REBNY’s Unlikely Alliance on Affordable Housing 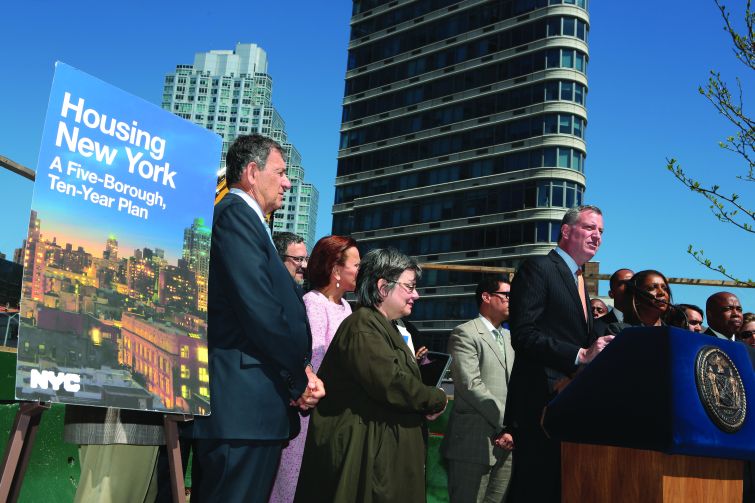 Anyone running for higher office in New York must invoke the three pillars of city governance to earn the job: One, plan to keep crime down; two, improve public school performance; and three, create more affordable housing. And a sitting mayor must administer concrete plans addressing them.

Moreover, he or she must do all three while avoiding any self-inflicted stumbles—or corruption inquiries—and your legacy is secure as a civic leader.

A month into his second term, Mayor Bill de Blasio has overseen a steady 27-year dip in crime returning the city to levels comparable to the 1950s.

His most widely touted achievement has been a universal pre-K program that will improve the lives of New York’s youngsters for generations. More students are attending college than ever before. And academic achievement in public schools has slightly improved.

Housing has been more complicated.

Creating new housing is a goal that progressive politicians and the city’s profit-minded developers share.

“Housing is all about supply and demand,” said Real Estate Board of New York President John Banks. “We don’t have enough housing in New York, and we need to build more housing for all segments of the market—affordable, moderate and market rate.”

But mayors have many tools to spur development generally, and on parcels of city-owned land.

The late-Mayor Ed Koch is still celebrated for generating 100,000 units of affordable housing—a promise he made in his 1985 State of the City address and kept.

Former Mayor Michael Bloomberg used Koch’s plan as a model. By the end of his administration, the city created or saved 165,000 units of below-market housing.

Thanks to a booming economy, tax revenues rose from 2012 to 2016, although they dipped slightly over the last year.

Construction also surged early in the mayor’s first term with the city approving permits for 20,329 units in 2014, more than three times as many as in 2009. And permits continued to be issued at a frantic pace—an average of 19,826 each year from 2010 to 2017, according to records analyzed by REBNY. That’s a 14 percent decline from the previous decade’s annual average of 23,123 but 182 percent higher than the 1990s when the yearly average was 7,020 permits, the records show.

The renewal of a crucial tax break last April also likely spurred developers to build luxury projects with a portion of units reserved for lower- and middle-income residents.

The housing tax abatement, known as 421a, expired in January 2016 after state lawmakers failed to reach a deal with REBNY and the Building and Construction Trades Council of Greater New York over prevailing wages for construction workers. Negotiations over the measure took a year and a half before it was tucked into the state budget as “Affordable New York.”

Developers have been waiting for the abatement’s renewal, causing a slight lag in development projects, Banks said.

“We have every expectation the new Affordable New York program will return us to the time frame of the past decade of 20,000 units per year in production,” Banks said.

“The mayor doubled down and they put a lot of resources, human and financial into the plan. They seem to be doing very well and on track,” said L+M Development Partners CEO Ron Moelis. “The mayor has done a good job reigning in costs to make programs more efficient.”

But de Blasio has had difficulty selling his plan to the very constituents he hopes will live in these units.

City Hall wanted to rezone 15 neighborhoods in his first term. Only three—East New York, Brooklyn, Far Rockaway, Queens and East Harlem—passed the City Council and one was withdrawn entirely.

The East Harlem hearings were incredibly contentious; activists chanted, “East Harlem is not for sale!” and disrupted a council meeting, arguing the rezoning would allow luxury development that would price out longtime residents.

Other large redevelopment projects on the mayor’s agenda, such as the Bedford Armory site in Crown Heights, Brooklyn or Sunnyside Yards in western Queens, have been significantly altered or delayed in the wake of community opposition.

Such criticism is steeped in “NIMBYism”—“Not In My Backyard”—where residents want more affordable housing, just not in their own neighborhoods, Banks said.

“It is understandable that people would try to protect their communities, but you can’t ask for more housing and prevent the production of housing because of concerns about density and fear of gentrification,” he said. “They don’t like tall buildings, but the de Blasio administration recognizes, in order to meet prices demand, he has to upzone and have more density.”

Developers must continue to provide housing units at a range of incomes, Banks asserted, even if some of the units at the moderate end stay on the market longer because they are the units paying for most of the project.

“In order for building to be economically viable, you have to get a certain amount of rent and you need that upper income level to make the building financially viable,” he said. “Otherwise, it throws the financing off.”

Housing advocates say their primary concern has less to do with density than with affordability.

“The plan should focus more on targeting the limited resources the city has on housing that’s affordable to the very low-income households in the city— that’s 50 percent of area median income and below,” said Oksana Mironova, a housing policy analyst at Community Service Society of New York, which is a nonprofit that fights poverty. “That’s where the greatest rent burdens are, and that’s the demographic of people suffering the most amount of displacement as a result of everything happening in the city.”

Jonathan Westin, the executive director of New York Communities for Change, a housing and workforce advocacy group, attributed a surge in homeless New Yorkers—up 39 percent over the past year—to a lack of housing options for the city’s poorest residents. About 60,000 New Yorkers, including 40,000 families with children, are currently living in city shelters.

“In order to make a dent in the homeless numbers, they need to build and preserve housing for people on the verge of homelessness—working families with, in some cases, minimum-wage jobs,” he said. “The mayor’s housing program isn’t meeting their needs.”

Instead that plan largely follows the Bloomberg blueprint of rezoning swaths of neighborhoods and working with private sector developers to build new housing, Westin said.

“The rezonings serve to accelerate gentrification in some ways worse than what Bloomberg [did],” he said. “They’re going into neighborhoods and gentrifying them, and that leads to more displacement. It’s disrupting the community and pushing out families.”

The city’s booming economy has allowed the mayor to revise his housing projections upward. In October, the de Blasio administration pledged to construct and preserve 300,000 units by 2026.

“We’ve kept our promises to New Yorkers, and now it’s time to go farther and faster,” de Blasio said at an Oct. 24, 2017, press conference. “Like Mayor Koch before us, we are building an engine that will keep families in safe, decent and affordable homes for decades to come. We will keep this a city for seniors, veterans, working families and the middle class.”

But that engine may stall thanks to factors beyond the mayor’s control.

The city’s economy may be slowing down as both private sector job growth and tax revenues over the past year have not kept pace with previous years since 2012. Meanwhile, construction costs and property values continue to rise, making it more expensive for the city to finance new housing projects.

Real estate industry leaders have been clamoring for the revision of the scaffold law, which makes property owners and contractors liable for injuries on the job. But any reform faces an uphill battle in the legislature.

“New York is the only state in the nation whose law continues to dramatically increase the cost of general liability insurance,” said Banks. “Unless we do something about the Scaffold Law, we’ll remain at a competitive disadvantage to other states.”

The federal tax overhaul will likely benefit real estate investors, and the plan kept subsidies for private activity bonds that pay for large development projects, but the long-term effect of the tax plan on the market remains unclear.

And the Trump administration itself is a wild card that could cut federal spending on affordable housing and development programs, eliminate a visa program that enabled investment in development projects, or simply shut the government down repeatedly.

City Hall officials acknowledge the uncertainty of the tax plan and budget cuts on their housing plans.

“We have been actively working to form coalitions with national affordable housing advocacy groups and other cities and states to fight threats and elevate the importance of housing, which isn’t just a crisis in New York City,” said de Blasio spokeswoman Melissa Grace.

Whether the mayor ultimately succeeds at keeping the city affordable may hinge more on the city’s ability to preserve large tracts of housing than create new units.

“The real threat to affordability is the naturally occurring moderately priced rent-stabilized multifamily buildings in weaker parts of strong markets and strong parts of weaker markets,” said Community Preservation Corporation Vice President Robert Riggs, a housing lender who works with nonprofit developers. “There’s a lot of new construction in these neighborhoods, but it does not compare to the amount of units that are just there.”

Preservation takes up about 60 percent of the mayor’s 300,000-unit plan, a City Hall spokeswoman said. And two-thirds of the 77,000 affordable units were existing homes the city financed and kept under rent regulation.

City housing officials have been scouring properties in emerging residential markets, such as Crown Heights and Bushwick, both in Brooklyn, and Washington Heights, to keep residents in their homes.

The prices of units in those markets across the city will continue to rise as property values increase if the city doesn’t get there first, housing lenders say.

“They’re small buildings, no inclusionary component, not happening with tax credits,” Riggs said. “It’s going to be building by building with owners getting comfortable with the city’s housing program.”

Update: This story has been edited from the print version to reflect more current data on the de Blasio administration’s financing of affordable housing.