The Formidable Fannie and Freddie: Is Multifamily Lending Set for a Slowdown in 2018? 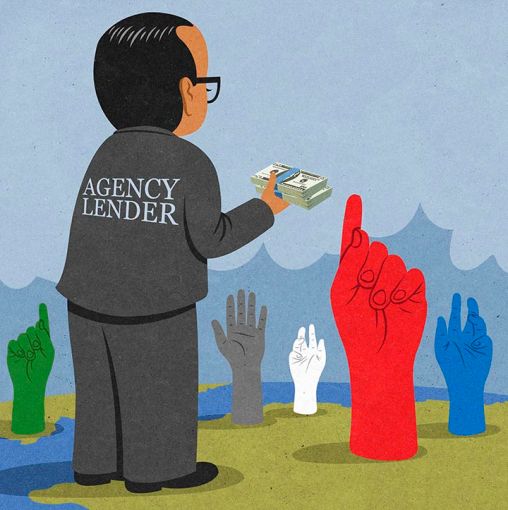 Lenders under the umbrella of the Fannie Mae Multifamily Delegated Underwriting and Servicing (DUS) program have been setting records over the last couple of years, stepping to the forefront of the lending arena and delivering substantial amounts of debt across all multifamily property types.

Freddie Mac funded 198,000 apartment homes in the third quarter and took on $43 billion in mortgage funding in November 2017 alone, according to a Freddie Mac monthly volume survey.

In the current multifamily market environment, that volume and competition could create a problem, and a slowdown may be on the way. Analysts warn of overly competitive markets, stagnant rents in gateway cities, compressed cap rates, plateaued absorption rates and an oversupply of certain assets (such as luxury condominiums) culminating and pumping the brakes on the sector in 2018. Add to the mix the demand to meet millennial taste and you have quite the conundrum cocktail.

The amount of outstanding debt guaranteed by Fannie Mae has increased each year since 2013 to $246 billion through the second quarter of 2017—or roughly 20 percent of the market share of outstanding multifamily debt, according to a second quarter debt market report from the agency. Freddie Mac Multifamily—which doesn’t rely on DUS financing and focuses more on home ownership and affordable housing—held 16 percent of the market share to complete a 36 percent piece of the total multifamily debt pie.

The Federal Housing Finance Agency (FHFA) twice adjusted the lending caps for Fannie Mae and Freddie Mac in 2016, leading Fannie Mae to set a record for deal volume at $55.3 billion—up from $42.3 billion in 2015—while supporting 724,000 units of multifamily housing—the highest volume in the history of its DUS program. Wells Fargo Multifamily Capital and Bethesda, Md.-based firm Walker & Dunlop led the lending charge with $11.7 billion and $6 billion in loans, respectively. Fannie swiftly surpassed its 2016 record in November 2017, registering $57.7 billion in new business.

Fannie also leaped headfirst into senior housing, financing a record $4 billion through the third quarter of last year to prepare and account for an aging Baby Boomer population. Freddie, on the other hand, reeled in a record $1.8 billion in profits in the third quarter of 2017, according to a financial report from Freddie Mac CEO Don Layton.

“Multifamily is still the safest asset,” said Sol Kinraich, the founder and managing principal of New York-based MLK Real Estate Capital. “We still have plenty of markets that are millennial driven, like [Austin, Texas], Seattle, Pittsburgh and [Nashville, Tenn.] It’s definitely a trend we look for in evaluating multifamily opportunities.

“You still see the concentrated ownership of homes or that participation rates are at all-time lows because millennials aren’t committed to home ownership,” Kinraich added. “Some of our clients have been interesting in that they’re tailored in certain submarkets exclusively to millennials.”

In two 2017 Gallup surveys, 21 percent of millennials said they’ve changed jobs (even relocating and moving to other gateway cities) within the past year, and another survey of 15,000 adults released in February 2017 shows that 43 percent of employed Americans spend at least some time working remotely. These factors—migration and the desires of people to work from the comfort of home—have boosted lending interest in the multifamily sector.

“At the beginning of the cycle, lenders like Greystone and Arbor Realty Trust and others recognized the need for multifamily bridge product in order to prepare a borrower or property for agency financing,” said Joseph Cafiero, the president of New York-based firm CREMAC Asset Management. “You can see that [Net Operating Income] growth is in negative territory in some cases and growth in NOI is diminishing in others—through the tapping out on dollars per square foot or because expenses are exceeding the growth of NOI.”

That may ring true as lenders aren’t overly optimistic at the start of the New Year. In Fannie Mae’s Mortgage Lender Sentiment Survey for 2018, released on Dec. 26. 2017, lenders generally provided negative outlooks for profit margins in the multifamily category over the next three months.

“The bubble has formed, it’s just a question of when it pops,” Cafiero said. “The multifamily sector has long been recognized as the most stable or least volatile sector to invest in. The transaction volume in the sector, availability of cheap debt and extremely low cap rates fueled the bubble. Stagnant NOI growth, especially in the rent-regulated area will eventually lead to significant losses for those properties that experience compression in net cash flow. This will also lead to landlords reducing services they provide to multifamily properties, and then it will be more difficult to keep up properties like they should, which will erode the value of the property.”

Lenders cited competition, consumer demand, staffing challenges and market trend changes as the primary reasons for their negativity, according to the Fannie Mae survey. Additionally, the share of lenders who expect to see growth in refinance mortgage demand over the next three months fell to the lowest reading in a year across all loan types.

“Key trends have persisted throughout this year,” Doug Duncan, a senior vice president and chief economist at Fannie Mae, said in the report. “Lenders who see declining profits outweighed those, noting improvements in the bottom line for the fifth consecutive quarter. Three-fourths of those seeing deteriorating profits cite competition as the most important reason—a survey high—compared with only about one-third two years ago.”

Most of the competition for Class-A properties is in urban areas where there has been sufficient growth, immigration and infrastructure investment and lower cap rates, according to a third quarter 2017 multifamily investment analysis from JLL. Urban centers have seen an uptick in construction, which has essentially worked to soften some gateway markets as landlords have been forced to lower rents to meet demand.

“Multifamily has historically been a safe haven [developers and investors] migrate to with a thesis supported by the national need for housing,” Cafiero said. “Multifamily has always been the least volatile sector in commercial real estate because it’s not subject to the same market and economic influences whereas the office market is subject to a business cycle and retail is subject to factors such as consumer spending. Hotels are subject to business and travel while the office market sometimes influences hotels because if business flourishes, more people travel.”

National apartment vacancies ticked up to a seasonally adjusted 4.5 percent in the third quarter, breaking out of the 4.1 percent to 4.4 percent range that’s held steady over the last 18 quarters as the absorption rate fell to a five-year low, according to data from REIS. Still, apartments topped the list of occupancy gains across all property types at 94.1 percent in the second quarter, according to a report from National Center for Real Estate Investment Fiduciaries (NCREIF) Director of Research Sara Rutledge.

Cap rates for apartments ticked up slightly to 4.35 percent in the second quarter of 2017 but were still near historic lows. NOI growth remained stagnant at 5 percent, representing a slowdown in growth from a double-digit figure two years ago, according to Rutledge.

“What’s most interesting is the impact of this NOI compression,” Cafiero said. “The point is it’s beginning to look as if the return no longer makes sense for an investor. If you buy multifamily today at a 3 percent cap rate, you’re getting 3 percent return. At some point, you have to charge less management fees and cut costs to maintain a return.”

Apartment pricing is now just 3.4 percent higher than a year ago, which marks a new low for the current cycle, according to a Ten-X Commercial Real Estate Volume & Pricing Trends report from this past December.

With an oversaturated market in terms of assets and players, banks have been steadily tightening their standards for commercial real estate loans backed by multifamily properties, according to data from the Federal Reserve’s October 2017 Senior Loan Officer Opinion Survey on Bank Lending Practices.

But that doesn’t mean there aren’t opportunities. Deal volume has been down in many markets across the country, but the opportunities are available. Investors are looking for where there’s sufficient enough job growth, wrote Karlin Conklin, an executive vice president of Private Equity of Investor’s Management Group and a principal of IMG Northwest, in a September 2017 report for Multi-Housing News.

“It has been a resounding investment and there’s still a tremendous amount of capital available,” Kinraich said. “The retail sector has been under significant turmoil and a lot of retail transactions have been frozen as people are hesitating to deploy capital. We have clients who have sold their retail portfolio and are looking to deploy capital into multifamily. So, that’s one particular reason we’re bullish.”

Apartment lending, in particular, accounted for a hefty share of total deal volume, claiming just over 36 percent and showcasing its popularity among investors, according to the Ten-X third-quarter report.

An upside to a softening market: Some analysts expect older, renovated Class-B multifamily properties built in the 1970s to 1990s and situated in suburban areas to attract demand. Others, like Conklin, aren’t so sure the market will be able to meet suburban demand.

“From a risk and reward perspective, acquiring 1980s and 1990s Class-A properties that can hold up if we get a pullback is very attractive,” Kinraich said. “I think from a top-line-growth-revenue perspective, owners and operators have somewhat lost their purchasing power because there are a lot of concessions in gateway markets where there’s been an added supply of multifamily product and landlords have lost power.”

Kinraich added, “A lot of our clients in certain gateway markets just can’t buy product because of the pricing, and so they’re going to secondary and tertiary markets where they’ve played in the past. People are trying to make things work by exploring other markets.”

The FHFA lowered Fannie and Freddie’s lending cap for 2018—$35 billion for each enterprise, down from $36.5 billion in 2017—under the assumption that the originations market will be smaller than in 2017.

While the multifamily sector is still brimming with opportunities, analysts suggest patience, astute underwriting and cautious optimism as we venture into 2018.