CREFC 2018: What’s at the Top of Lisa Pendergast’s Agenda This Year 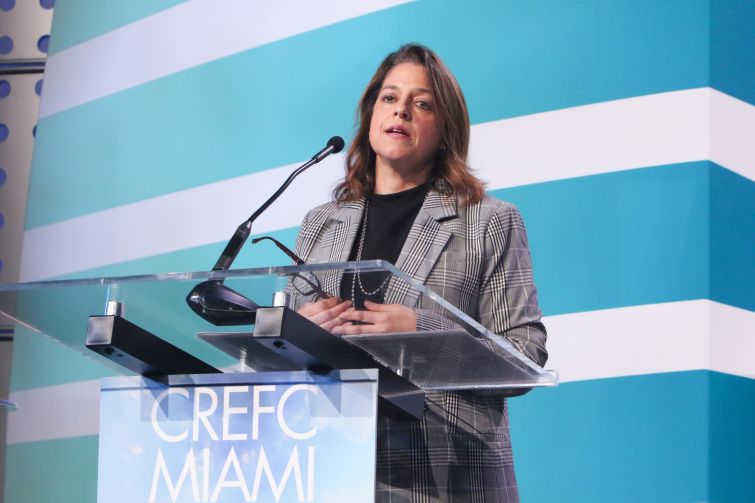 It’s been almost 18 months since CRE Finance Council tapped Lisa Pendergast as its executive director, and she’s had a busy start. At the trade association’s most-attended conference in 25 years, Commercial Observer snatched a few minutes with Pendergast between panel sessions and asked what’s on the minds of CREFC’s members as we head into 2018.

Commercial Observer: How has the conference been so far?

Lisa Pendergast: This year’s conference has a positive vibe that reflects the measured optimism of our members. There are over 1,800 people at the conference this year, the highest ever in CREFC’s 25 years. Volume is up in the CMBS sector, demonstrating successful implementation of the risk-retention regime. Moreover, our portfolio, GSE and alternative lenders also experienced rising to steady state loan volume in 2017. To the good, borrowers benefit from the liquidity available in the debt capital markets.

What is the most pressing issue that CREFC is focused on in 2018?

Our main focus will be to continue to advocate for the issues important to our members. While Tax Reform finally came to fruition in late 2017, the implementation phase will need to be monitored to ensure that no harm comes to commercial real estate. The devil is definitely in the details on this issue. There are a number of other issues important to our members, including regulatory reform efforts on both the legislative and regulatory fronts. In particular, the High Volatility Commercial Real Estate [HVCRE] rule, the Home Mortgage Disclosure Act, flood insurance, and key capital and liquidity issues, among others will all come into play in 2018. We see our role at CREFC as not only advocating but also keeping our members informed every step of the way on the issues that impact their businesses.

What are some of the recent developments at CREFC?

In late 2017, we introduced a CMBS secondary market liquidity task force, which includes about 40 members of sell-side and buy-side firms. They’ve met twice now—the second time here at this conference—and I think it’s a sound development in terms of improving liquidity in the secondary markets. Another important initiative is working with our members to prepare for the potential sunsetting of LIBOR at year-end 2021. We’ve put together another task force for this as it’s important to get ahead of the issue, since floating-rate loans being closed today may be outstanding post-2021.

We often hear that the customer experience in CMBS is a headwind to the sector’s growth. What is CREFC focused on changing?

Our Issuer/Servicer Task Force was launched in the fall of 2016. The goal was to gather both CMBS issuers and servicers and initiate a constructive dialogue around how to fix this problem. Their discussions revolve around how to expedite borrower requests and to do so in a customer-friendly way. Oftentimes, it’s a communication issue between issuers and servicers with loan documents needing to be more specific and consistent. Then, there are discussions around, “Do we really need these five steps to get to this one solution?” And bigger issues around who does what—whether it’s the master servicer or special servicer. So, does the master servicer really need to touch that issue, or should it go straight to the special servicer? Those are some of the questions we’re working through, but I think CREFC will be the mechanism in bringing groups together and making progress on some of the broader issues. We introduced the first round of work product to come from this task force at this year’s conference. The message here should be that, together, the industry is working to enhance the borrower experience. Hopefully, the recent pickup in CMBS loan volume means that the effort is working.

What’s your perspective on GSE reform and how it may impact multifamily lending?

We recently conducted an advocacy survey with our members, and most are eager to see Freddie Mac and Fannie Mae finally exit conservatorship. Beyond that, our members would like to see a public-private guarantee as opposed to a purely public one. Many responders believe that any solution should include adding greater distance between the single-family and multifamily GSE businesses. The multifamily portfolio during the crisis did just fine from a credit perspective, which is in sharp contrast to the single-family sector.

That makes sense given that single family was really the agent of disaster during the crisis.

There are a myriad of ideas as to how to fix the GSEs and our members are eager to see a change overall for a variety of reasons. Our non-GSE lenders would like access to more multifamily loans because right now the GSEs originate the majority of these loans, offering borrowers more attractive rates. The GSEs will definitely garner attention on the Hill this year, but it remains unclear as to whether any real progress will be made in terms of planning for an exit strategy out of conservatorship and then reinventing the GSEs to ensure no repeats of what happened in the last crisis.

Are we in a healthy place as an industry?

We’re long into the cycle and there doesn’t seem to be any of the aggressiveness you’d normally see at this stage. I think CMBS—with risk retention and the understanding that it needs to win its borrowers back—is moving in the right direction. The one concern I would have is some of the smaller banks and their potential to be a bit overzealous, and attention is being focused on them. But I do think the industry, from a macro perspective, is doing very well. Janet Yellen said recently that the Fed has raised its expectations for GDP growth—it’s not 4 or 5 percent but just under 3 percent. That’s impressive, and if tax reform can boost economic growth and interest rates remain low, that’s what drives the health of commercial real estate and commercial real estate finance. In a growing economy, a rising tide lifts all boats.