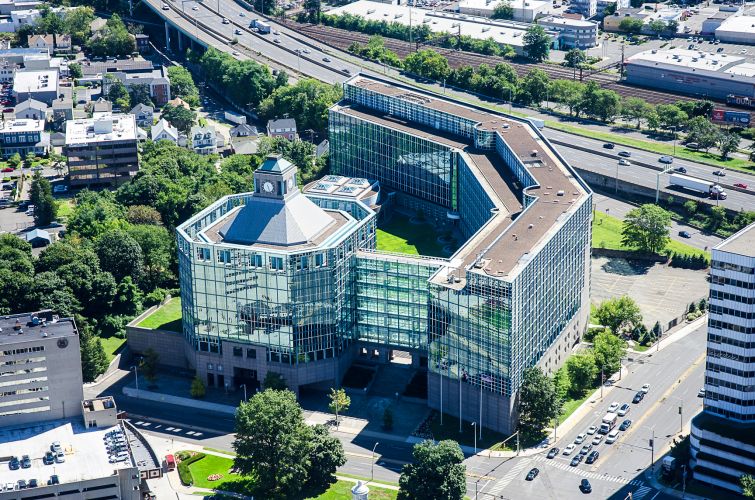 Tenants occupy 74 percent of 695 East Main Street, as well as 52 percent of the adjacent office building at 200 Elm Street. Together, the two buildings make up the BLT Financial Centre, which lists a cumulative occupancy of 58 percent, according to ACORE. About 40,000 square feet on the East Main building’s first and second floors are available for leasing, according to the landlord’s website. BLT purchased the building, an octagonal structure with a highly visible clock tower, in 2012.

“BLT Financial Centre has become one of the top assets in the market after BLT’s extensive renovation, offering the combination of contiguous blocks of space, superior ceiling heights and high-quality amenity space,” Jason Hernandez, an ACORE managing director, said in prepared remarks. “We take a lot of comfort in the strong leasing momentum achieved to date, providing durable cash flows in a challenging market, and BLT’s overall track record of executing in Stamford.”

The Stamford office market has struggled this year as tenants have decamped to livelier pastures. UBS, a longtime corporate denizen, has shifted operations back towards New York City to chase a younger workforce. International Paper, which brought its global headquarters to the Connecticut city in 2001, has gradually shifted its leadership’s offices to Memphis, Tenn. over the last 10 years. And though it’s staying in town, Charter Communications left a dent in the wallet of its landlord—Landis Group—this year when it announced it would vacate its former spot at 400 Atlantic Street for a bespoke headquarters near the city’s waterfront.

BLT, however, has worked hard to inoculate itself against the city’s woes. It has taken the lead in developing Harbor Point, the mixed-use commercial area that will be Charter’s new home. And at the BLT Financial Centre, private shuttle buses are available all day to whisk office workers two-thirds of a mile down the road to the Stamford train station, where they can commute to Manhattan in under an hour on an express Metro-North train.

That convenience has doubtless been key to the building’s ability to retain high-value tenants. Deloitte, Tudor Investment Group and Henkel, a German consumer-goods and chemicals company, are among the firms that call the complex home.

Tenants at the pair of sister buildings get access to a full-service cafe, a fitness center and a garage with charging stations for electric cars.

Representatives from Eastdil and Building and Land Technology did not immediately respond to requests for comment.