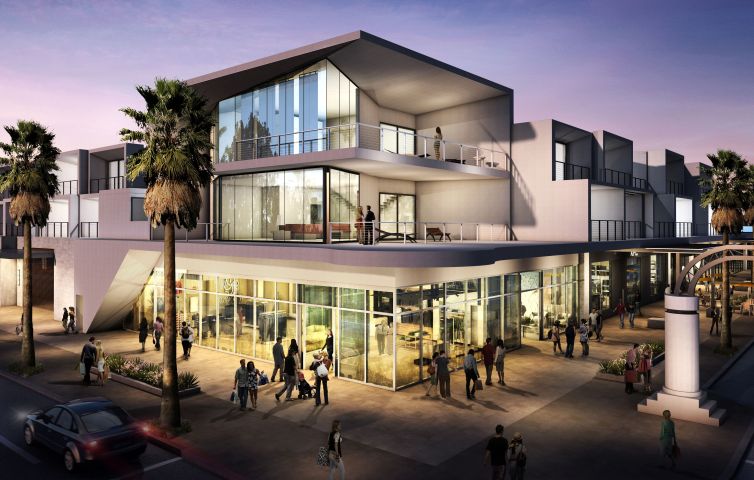 A rendering of the Hyatt Andaz under construction in Palm Springs, Calif. Image: HALL Structured Finance

HALL Structured Finance (HSF) has signed off on a $55 million construction loan for a hotel to be built in Palm Springs, Calif., according to an announcement by the lender today.

The Hyatt Andaz resort, to be developed by Newport Beach, Cali.-based Rael Development, will add 150 rooms to the resort town’s hotel market when it is completed in early 2019. HSF’s interest-only, non-recourse loan will carry a floating interest rate over its three-year term, the company said.

“The Andaz Palm Springs presented us with the opportunity to finance what will be one of the finest hotels in the Coachella Valley once completed,” Mike James, HSF’s president, said in a statement. “Hyatt’s Andaz brand is a high-quality, boutique-inspired lifestyle hotel that will be a perfect match for the palm Springs market.”

The four-story hotel building, at 400 North Palm Canyon Drive, will feature 27,000 square feet of retail space at street level, according to planning documents considered by the Palm Springs City Council in March, 2015. The lobby, guest rooms and amenities—including a full-service spa, a fitness center, and two swimming pools—will all be located on the three upper floors. That design will accord with the city’s predominant architectural style, according to HSF.

At the 2015 City Council meeting, local legislators thanked Rael for its responsiveness to the city’s design preferences and approved the project, according to a record of the meeting, although one council member raised concerns about a canopy that would run along Palm Canyon Drive, a major shopping boulevard in the city.

Palm Springs, about 100 miles east of downtown Los Angeles along Interstate 10, lies in the Coachella Valley at the foot of the San Jacinto Mountains. The desert town gained cachet in the 1920s as early hotels like the Oasis and El Mirador drew movie stars looking for a secluded respite from Hollywood.

In the latter half of the 20th century, the valley became a popular retirement destination, but the area has more recently landed on younger visitors’ maps as the site of the annual Coachella Valley Music and Arts Festival, 20 miles south of Palm Springs in the town of Indio.

“Coachella is one of the more popular music festivals in the country,” Mitchell said, predicting that millennial visitors would find the hotel a good fit for their needs. “Yes, there are resorts [in Palm Springs already], but this is a modern, slick lifestyle hotel with all the bells and whistles. Existing resorts are very nice properties, but they’re drive-to resorts. Here, you can walk out the front door.”

Representatives of Rael Development did not respond for a request for comment.